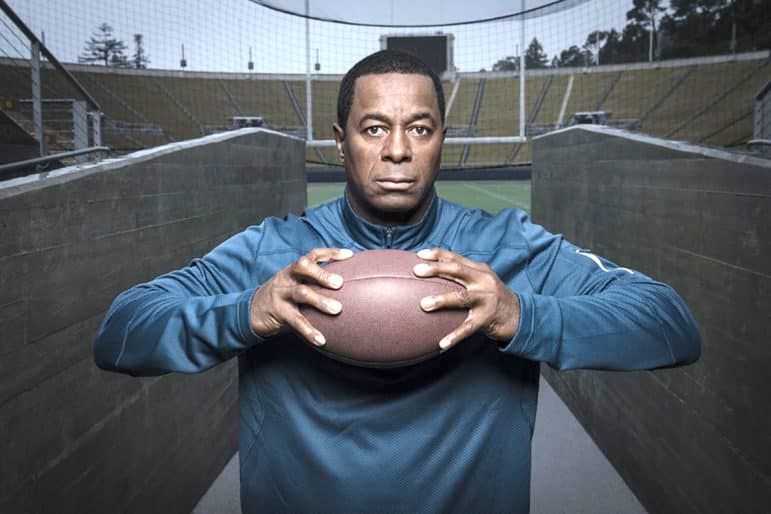 Dwight Hicks, a former professional football player and two-time Super Bowl Champion with the San Francisco 49ers, headlines a group of actors who will portray the characters of X’s and O’s, a play co-created by Tulane assistant professor Jenny Mercein.

On Thursday (Feb. 17) at 7 p.m., Tulane will host a reading and panel discussion of X’s and O’s inside the Jill H. and Avram A. Glazer Family Club at Yulman Stadium, 2900 Ben Weiner Drive. The event, a collaboration between the Tulane Center for Sport and the School of Liberal Arts’ Department of Theater and Dance, is free and open to the public.

Mercein was raised in a football family. Her father, Chuck Mercein, played six seasons in the NFL and won an NFL Championship with the New York Giants. He was also on the Green Bay Packers squad that captured Super Bowl II.

“Football is the soundtrack of my childhood, but what is going to happen to the game? Can it just keep going on like we don’t know what we know now? I personally don’t think that theater can change the world, but I think it can inspire a conversation that can, in turn, make real change,” Mercein said.

The event will include legal, medical and research experts and former players — both young and old — to provide insight into the league, team and locker room climate around head trauma in football.

“The Center for Sport was designed to bring multiple perspectives together and have difficult conversations with all sides involved when it comes to conditions such as traumatic brain injury. We look forward to this event and having a productive discussion about a topic that’s on the forefront of our industry,” said Dr. Greg Stewart, who is the W. Kennon McWilliams professor in sports medicine, medical director of the Tulane University Center for Brain Health and the Professional Athlete Care Team and co-director for the Tulane Center for Sport.

Dwight Hicks, a two-time NFL Super Bowl champion with the San Francisco 49ers and member of the original cast in 2015, headlines a group of professional actors and a Tulane student who will portray the characters during the reading of X’s and O’s.

“I want the masses to understand the pros and cons of playing the game of football. X’s and O’s paints a portrait of the beauty and the carnage of this game we love. It is truly a living document that continues to evolve,” Hicks said.

A panel discussion will follow the docudrama and focus on how the perception around head trauma and traumatic brain injury has changed since 2015 when X’s and O’s was written.

The panel, moderated by Risa Hall, senior director for administration and major events for the Allstate Sugar Bowl, will feature Mercein, Stewart, Hicks and Keyes.

“I want to show what this game gives to a family, a community and, in effect, to a player,” Mercein said. “What emerged in the research is that people have been debating whether the sport is too rough as far back as the game goes. The science is new, but the debate is not.”