The Uptown parade season begins tonight with the krewes of Oshun, Cleopatra and Alla on the St. Charles Avenue route.

It will be a special anniversary ride for two of the krewes. Oshun is celebrating its 25th anniversary. And Alla, one of the city’s oldest krewes, will close out the night of parades on its 90th anniversary.

It will be a chilly night with lows around 40, according to the National Weather Service.

See here for information on parking, driving and getting around during Carnival. Call 504-658-8100 for parking enforcement. As always, take care in large crowds and report suspicious activity to public safety officials. 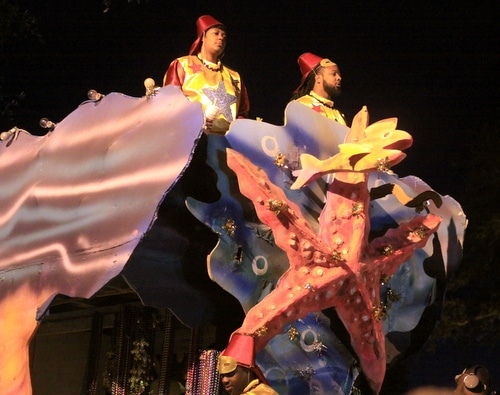 The Krewe of Oshun heralds the Uptown parade season.

The Krewe of Oshun, named for the Yoruba goddess for love and sensuality, was formed in 1996. The krewe has been riding for quarter century, reflected in its “Silver Lining” theme for 2022.

Its king, or Shango, and queen ride on a peacock floats, and peacock images are also prominent in the krewe’s throws. Oshun has 300 male and female riders on 20 floats. 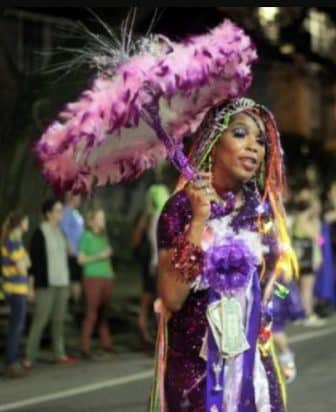 A Baby Doll troupe marches with Oshun in 2019.

Look for: This parade gives viewers a chance to see Baby Doll groups in action. Dating to the beginning of the 20th century, the Baby Dolls are considered the first women to costume and mask on Mardi Gras.

Catch it if you can: Oshun’s signature throw is a handmade fan. 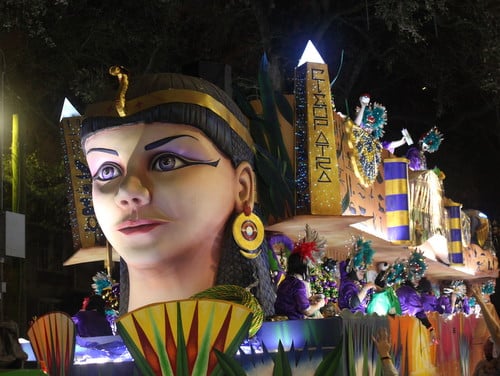 The Krewe of Cleopatra title float rolls on Napoleon Avenue.

Named for a queen of legendary grace, beauty, courage and leadership skills, the all-female Krewe of Cleopatra rolls with 1,800 riders on 21 floats.

Cleopatra’s Friday night parade graced the streets of the West Bank for four decades before moving across the river to the traditional Uptown route on its 40th anniversary in 2013.

Catch it if you can: Krewe members throw glittered, hand-decorated chalices. Plus, Cleopatra’s doubloons are especially valuable this year: Find the number on the doubloon and enter it into cleoprize.com on your mobile phone to win a TV, scooter, bike or T-shirt. The contest is active only while the parade is lined up or rolling, from 6 to 11 p.m. on Friday. 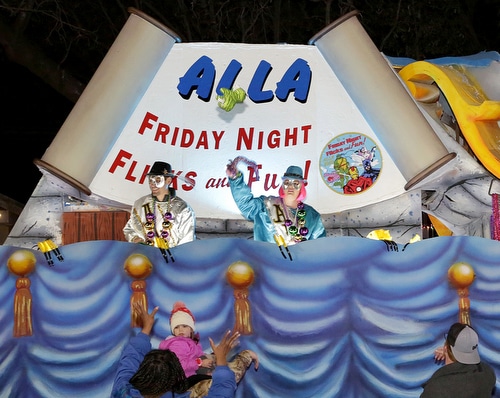 The Krewe of Alla joins the Friday night lineup in 2020.

The Krewe of Alla was established in 1932. Its name (from Al. La.) pays homage to its birthplace of Algiers, Louisiana. But after the krewe moved its parade from the West Bank to the Uptown route and began accepting women as well as men in 2014, krewe leaders have emphasized the “All” in Alla.

For its 90th anniversary, 25 floats will carry 550 male and female riders. Its former captain Blaine “Mr. Mardi Gras” Kern, who died in 2020, will be honored with a black doubloon.

Look for: The signature Alla-gator float joins other underwater creatures.

Catch it if you can: The hand-decorated genie lamps harken back to Alla’s history of Maharajas and Maharanis reigning over the parade.