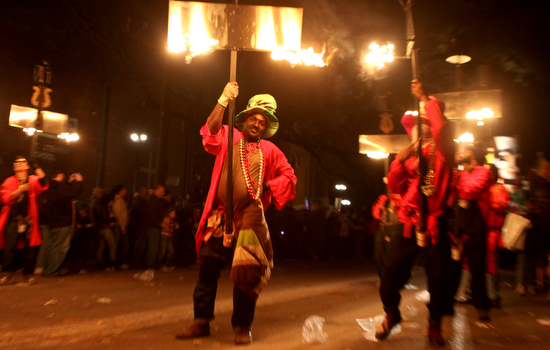 Flambeaux carriers light the way for the Krewe of Orpheus parade.

The all-day Lundi Gras festivities culminate with two spectacular parades, one a study in old-world elegance and another in contemporary opulence.

National Weather Service tells us to expect a clear night for the Lundi Gras parades, with a low in the upper 40s. 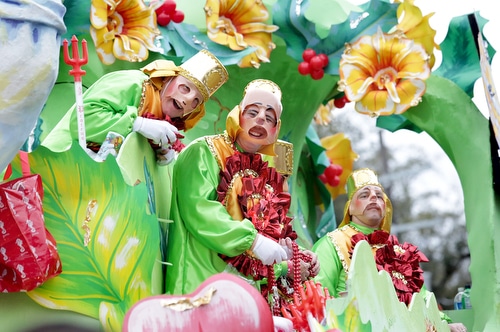 Presenting the second oldest parade in the Carnival lineup, the Krewe of Proteus adheres to tradition just it adheres to the chassis it has been using since the 1880s, when it was formed as an offshoot of the mystic krewes of Momus and Comus. It stopped parading for six years in the 1990s, returning to the streets again 1999.

Proteus was a primordial deity in Greek mythology, the protector of the seas, rivers and other bodies of water. According to Homer, he was the master and herdsman of sea monsters and sea animals. He could foretell the future, but would change his shape to avoid having to; he answered only to those capable of capturing him.

Watch for: The king rides in distinctive seashell float. The U.S. Marine Corps Band adds to the Proteus sound track.

Catch it if you can: Throws include LED flambeaux and plush crowns. 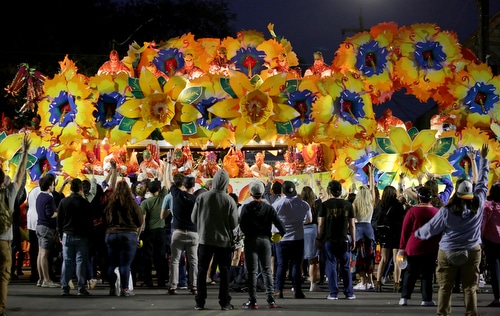 The Krewe of Orpheus parade rolls in 2020.

When the superkrewe of Orpheus first paraded in 1994, its 700 riders was a New Orleans Carnival record. Now you can expect about 1,500 male and female riders on 40 floats; one float alone, the eight-unit Smoky Mary, holds 230 riders. Orpheus is consciously nonexclusive.

Look for: “Game of Thrones” star Finn Jones, singer and actor Nicole Scherzinger, and  wrestler Tyrus will reign over the Orpheus parade. The krewe’s signature floats include Leviathan, Trojan Horse and the Smoky Mary.

Catch it if you can: Riders will throw hand-decorated tambourines. 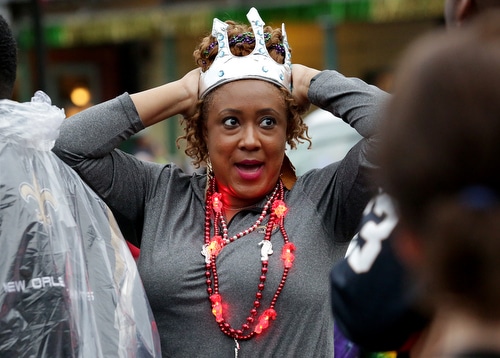 Akeshia Smothers tries on the lighted crown she caught during the 2020 Krewe of Proteus parade.