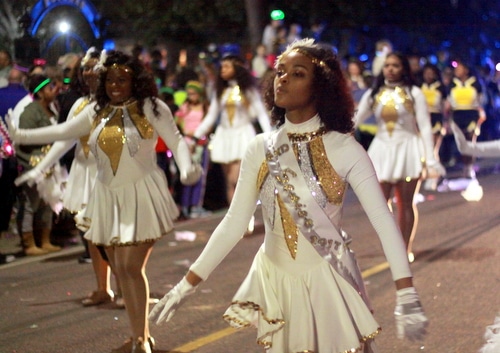 The St. Katharine Drexel Prep band marches with the Mystic Krewe of Nyx.

The steady week-long drum beat to Mardi Gras begins tonight, with parades from the Ancient Druids and the Mystic Krewe of Nyx.

The all-male Druids and the all-female Nyx are known for delivering barbs back and forth, employing signs on their floats for veiled insults. This friendly rivalry can add a touch of drama to this parade weeknight. Since its last parade in 2020, however, Nyx has been undergoing its own dramas.

One thing both Wednesday night krewes have in common: They keep their theme under wraps until the parade. They also follow the same route, shown below.

The National Weather Service promises a warm winter night with some patchy fog, a gentle breeze and a low around 64. It should be a pleasant night for parades. 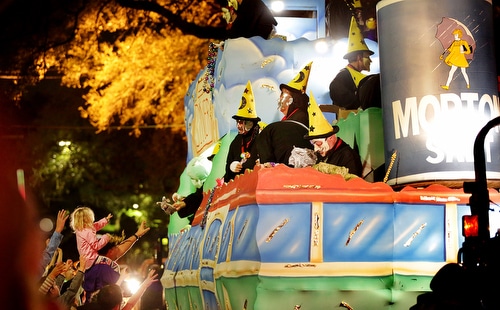 The Krewe of Druids parades on Magazine Street in 2020.

The druids of old were learned, upper-class spiritual leaders of Celtic society, dating back to the fourth century BC. In New Orleans, the Druids date back to the 1920s and ’30s, when the Mystic Krewe of Druids held its procession after Rex on Mardi Gras Day.

The Ancient Druids who hold a parade on the Wednesday before Mardi Gras formed in 1998, giving members of other krewes a chance to parade. All of the 250 Druids belong to other Carnival organizations. The parade-only krewe, with no bal masque, is ruled by the Arch Druid, who rides with his jester. The identity of the Arch Druid — or any krewe member, for that matter — is never revealed.

Look for: Flambeaux carriers light the way for this traditional night procession. The Marine Corps Band shows revelers the beauty of precision.

Catch it if you can: The Druids, presented by the Golden Acorn Society, give out plush acorns as one of its signature throws. Another signature throw, lighted wands, make the night more magical. 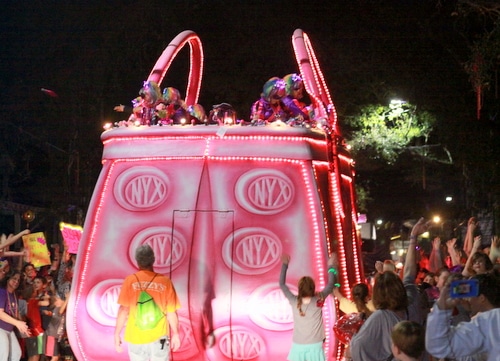 The Mystic Krewe of Nyx burst onto the Carnival scene in 2012, when the krewe named for the Greek goddess of the night began its reign over Wednesday night. Its first parade had 534 riders, according to the krewe’s website. That number grew exponentially every year, until it became one of the city’s superkrewes with more than 3,400 riders on 44 floats in 2020.

Its 10th anniversary parade will have 240 riders on 17 floats, according to Arthur Hardy’s authoritative Mardi Gras Guide. The krewe saw a mass exodus in the summer of 2020 in response to a social media post from Captain Julie Lea that was seen as countering the Black Lives Matter movement.

Look for: The krewe has its own dance troupe, the NOLA Nyxettes, dressed in Nyx’s signature black and hot pink.

Catch it if you can: The Nyx signature throw is a glittered and hand-decorated purse.