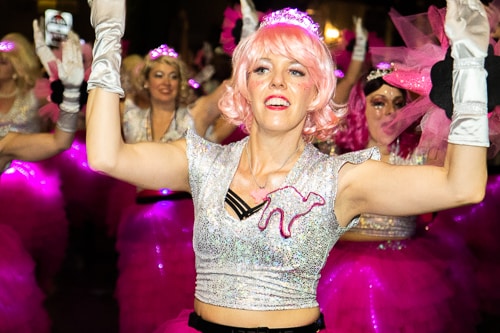 The Camel Toe Steppers dance down St. Charles in the 2019 Muses parade.

Tonight is Jeudi Gras, for many a highlight of the parade season, and it normally draws large crowds. The Knights of Babylon kick it off, followed by the satirical Knights of Chaos and closing with the superstar Krewe of Muses.

The night will be mostly cloudy with a low around 57 degrees, according to the National Weather Service. 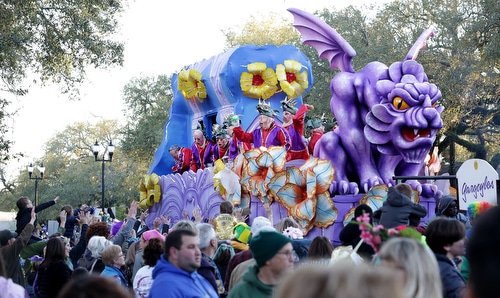 The Knights of Babylon 2020 parade

The Knights of Babylon adheres faithfully to Carnival traditions. The floats have the same basic designs and dimensions that they did at the krewe’s inception in 1939. The krewe owns its floats as well as the den that houses them. The traditional flambeaux carriers continue to accompany the parade, and the king’s float, Sargon, is mule drawn.

The all-male krewe has more than 300 riders on 27 floats. You won’t know the theme until you watch the parade.

Look for: Signature floats include the Carrollton streetcar, the Gates of Ishtar, the Babylonian Barge, the Hanging Gardens of Babylon and the Jesters Float.

Catch it if you can: Originally the Jesters Club, this krewe throws lighted jesters on a stick. 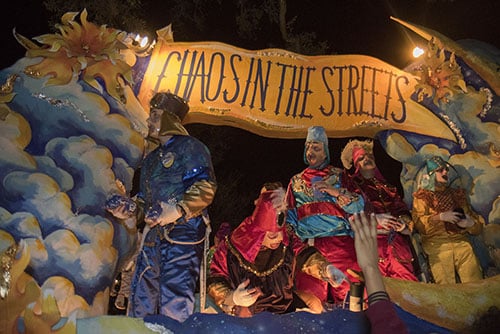 The Knights of Chaos, founded in 2000, parades on what was once known as “Momus Thursday,” before that revered old-line krewe left the streets in 1992. In Greek mythology, Chaos is the void from which the universe is created.

Chaos carries on the old-line tradition with a satirical parade using the 16 Momus floats lighted by flambeaux carriers. The 200 knights are all Carnival veterans, and the identity of the king, called No. 1, remains a secret. So does the theme; past themes include “Chaos in the Streets,” “Chaos Theory,” “Chaos Says N.O.” and “Looking Forward to Chaos.”

Look for: The captain and lieutenants ride on horseback.

Catch it if you can: Riders throw decks of cards with intricate drawings of the floats, so you can relive the parade. 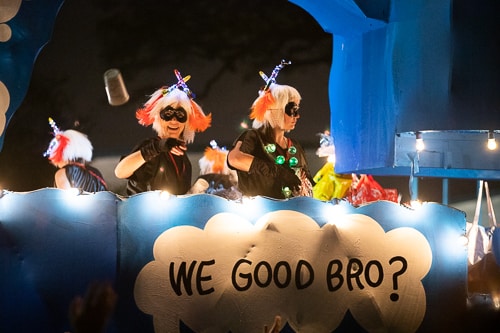 In Greek mythology, no festivity in Olympus was considered complete without the joy-inspiring presence of the nine Muses, whose names are also commemorated in Uptown streets.

Since its first ride in 2001, the Krewe of Muses has inspired joy with its witty floats; its lineup of dance troupes and bands; and its sought-after throws — especially the artful hand-glittered shoes.

Look for: The 2022 Honorary Muse is NBA executive and gold medal Olympian Swin Cash of the New Orleans Pelicans. Muses’ signature floats include the Shoe and the Bathtub, plus the seductive Sirens float that closes out the night of parades.

Catch it if you can: This krewe has excellent quality control over the items that fly from its 26 floats. Even if you don’t snag a Muses shoe, you’re likely to find something to treasure in its “re-Muse-able” throws. New for 2022: Muses members will throw take-home Covid tests. 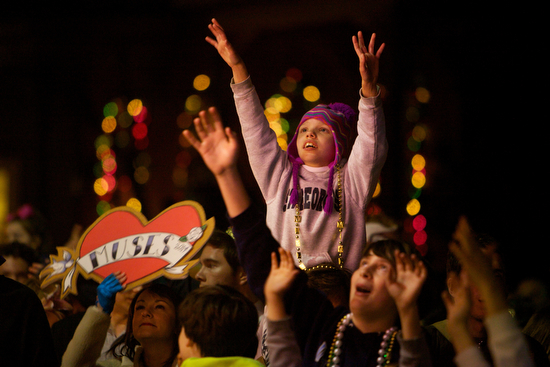 The crowd on Magazine Street clamors for Muses throws.