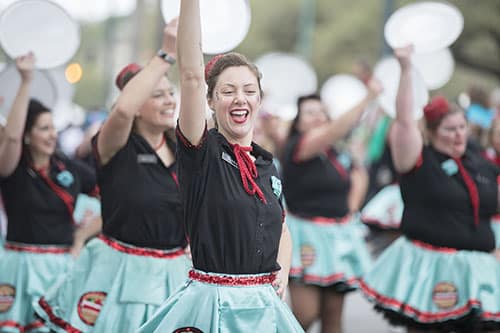 The Muff-a-lotta’s dance troupe rocks its way down St. Charles Avenue on the first Saturday of parades in 2018.

Saturday is very full parade day, with five krewes and their accompanying bands and dancers keeping the Uptown route lively from early afternoon until late evening.

The National Weather Service promises a mostly sunny day with highs near 60 degrees. In the evening, clear skies and a low around 46 degrees are expected. 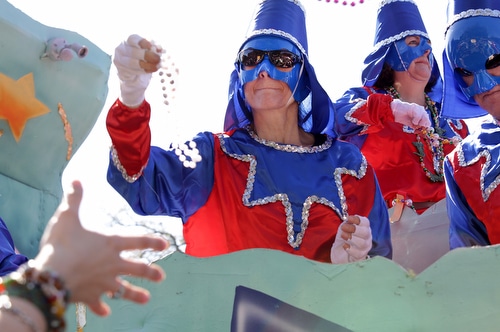 Riders toss beads on Napoleon Avenue during the 2020 Krewe of Pontchartrain parade.

The krewe named for the 630-square-mile estuary that borders the city’s northern edge celebrates marine life and all things New Orleans.  This year the Krewe of Pontchartrain has 400 male and female riders are parading on 17 floats.

Look for: This krewe honors the military and will feature the U.S. Air Force Drum and Bugle Corps. Mr. Mudbug, Super Grouper and the King Cake Baby are among the signature floats.

Catch it if you can: The signature throw is a decorated crawfish tray, and the krewe is introducing a new throw this year: the Pontchartrain dog leash. 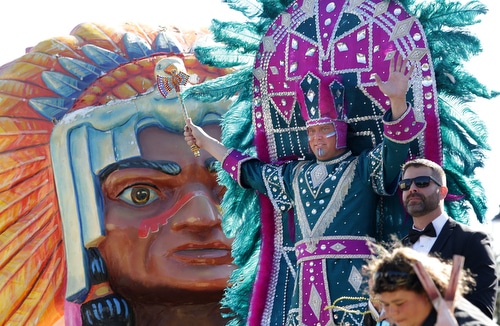 Chief Choctaw Ricky DeCastro Jr. waves his jeweled tomahawk as he greats the crowd in 2020.

The Krewe of Choctaw joined the migration to the Uptown route after parading on the West Bank since 1939, when the krewe bought some old mail wagons from the U.S. government to carry its first floats. The old stripped-down wagons formed the chassis for the first Choctaw parade floats.

This family-oriented krewe’s 275 riders include men, women and children on 16 floats.

Theme: “The Show Must Go On”

Look for: The co-ed krewe will have several floats with women only.

Catch it if you can: Signature throws include hand-decorated tomahawks and plush spears. 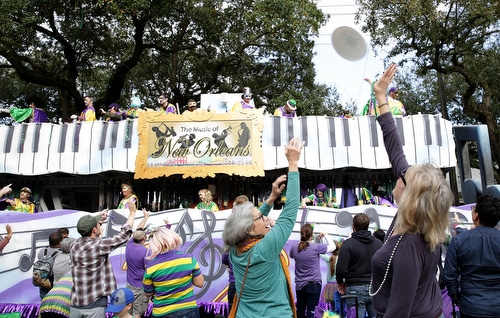 Frisbees are tossed to the crowd on Napoleon Avenue during the 2020 Krewe of Freret parade. The 2020 theme was “The Music of New Orleans.”

The first Krewe of Freret paraded for 40 years before disbanding in the mid-1990s. In 2014, a group of Loyola graduates took the name and paraded with it, instilling the daytime parade with a distinctive local flavor. Its marquee floats include one of the largest props ever affixed to a Mardi Gras float — a giant bust of Troy “Trombone Shorty” Andrews. The parade culminates in the Shorty Gras, part music festival and part Carnival ball.

Look for: Trombone Shorty is joining the Krewe of Freret parade again this year. A second-line procession is traditionally incorporated into the parade.

Catch it if you can: Freret is known for locally produced throws. Its signature throw is a hand-decorated mask. 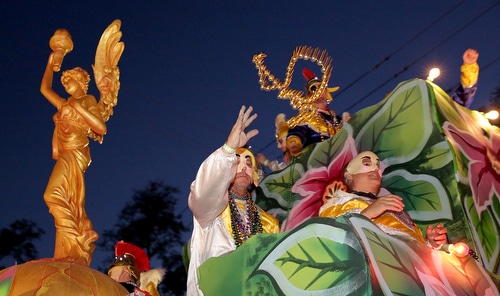 Knights of Sparta riders toss beads to the crowd on Magazine Street in 2020.

The Knights of Sparta present a traditional Carnival procession on the first Saturday of Uptown parades. The krewe’s motto is “Palmam Qui Meruit Ferat,” or “Let He Who Merits The Palm Possess It,” highlighting the Spartan value of achievement through hard work.

The all-female Mystical Order of the Phoenix will join the all-male Knights of Sparta this year, making it a co-ed parade with 500 men and women on 25 floats.

Theme: “The Art of Making Art”

Look for: Traditional flambeaux carriers light the way. The signature and king’s floats are carried by Clydesdale horses.

Catch it if you can: LED helmets are a signature throw. The Knights also have an annual mystery throw that’s top secret until the parade. 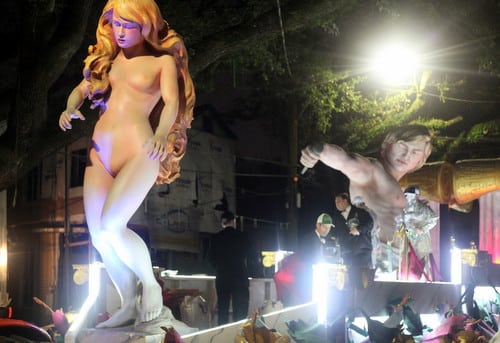 The Krewe of Pygmalion’s captain’s float.

The Krewe of Pygmalion was founded two decades ago by a group of Carnival veterans who wanted to strengthen the parade lineup during the first week of the Mardi Gras parade season.

In Greek mythology, Pygmalion was a king of Cyprus and a sculptor who fell in love with one of his works, a woman carved from ivory. Pygmalion’s theme for 2022 brings to life another Greek myth, that of Persephone, the Goddess of the Underworld.

Theme: “The Metamorphosis of Persephone”

Look for: The namesake of a mythological sculptor, this krewe is known for its exquisite, often sensual statuary.

Catch it if you can: Lighted headbands and wands are among the krewe’s throws.

Depending on the parade route, parking may be prohibited on either side of the following streets two hours before and after parades. Follow all posted signs.