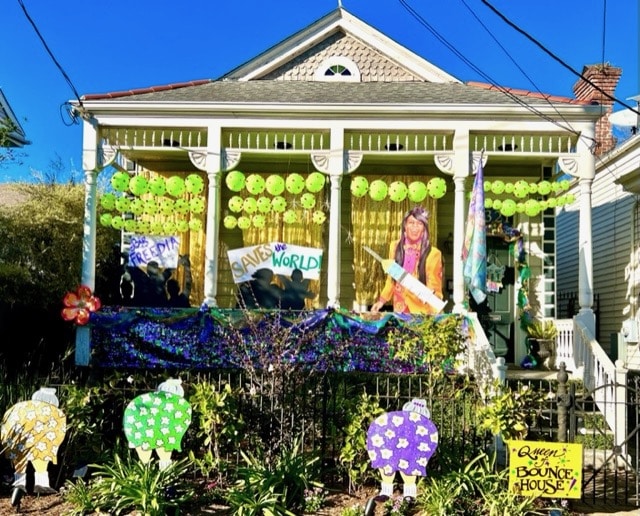 The Queen of Bounce House, where “Big Freedia Saves the World” against viral invaders.

In its second year, the Audubon-Riverside subkrewe of House Floats selected the theme “Déjà Vu in 2022.” It has a double meaning. First, it’s here we are again — still with the pandemic. The Krewe of House Floats’ overall theme for the 2022 Carnival season, “Vaccinate, Decorate, Celebrate,” is also a nod to the enduring pandemic.

Audubon-Riverside’s theme has a second meaning, recognizing that many residents plan to re-use most or all of their house float decorations from last year.

One such resident is Sarena Teng, whose house float on Laurel Street at Napoleon has its own Instagram account (@queenofbouncehouse). Her Queen of Bounce House uses the same Big Freedia figure from 2021, but added a twist, based on the KoHF theme “Vaccinate, Decorate, Celebrate.”

“It is still and always will be the Queen of Bounce House, but this year, it’s ‘Big Freedia Saves the World’ against viral invaders,” Teng said.

Playing off the popular 1980s “Space Invaders” video game, she made coronavirus germs out of lime green paper lanterns with hot-glued red glittery pompoms to look like spike proteins. Her Big Freedia has a giant vaccine syringe with a light-up laser gun that shoots down the germs. Nighttime viewers can see the vaccine explode in a fireball of green flashing lights.

Teng’s house is all DIY, except for the Queen Diva herself, which was made last year by Stronghold Studios. “When I see the smiles on people’s faces as their gaze moves from Big Freedia to her giant laser-tipped vaccine and then to the exploding viruses, I know the Queen of Bounce House is helping to heal our pandemic-weary souls,” she said. “Being able to celebrate Mardi Gras brings back some normalcy to our world, and we’re all excited to see the parades roll again.”

Although the subkrewe has fewer officially registered house floats this year – 99 compared to more than 170 in 2021 – those who are participating are enthusiastic.

“Our group has kept in touch,” said Courtney Guidry, captain of the Audubon-Riverside subkrewe. “After Hurricane Ida, we did a football-pool fundraising event for the Second Harvest Food Bank, and that seemed to get things rolling for the 2022 house floats.” Like most Carnival krewes, the KoHF has an altruistic side; the mother krewe and all the neighborhood subkrewes raise money for charitable causes.

A number of the 2021 participants contacted Guidry shortly after last year’s Mardi Gras and asked to get things going again for 2022. And there are some new houses in the mix this year also. “It’s really great to have new members join us,” Guidry said. 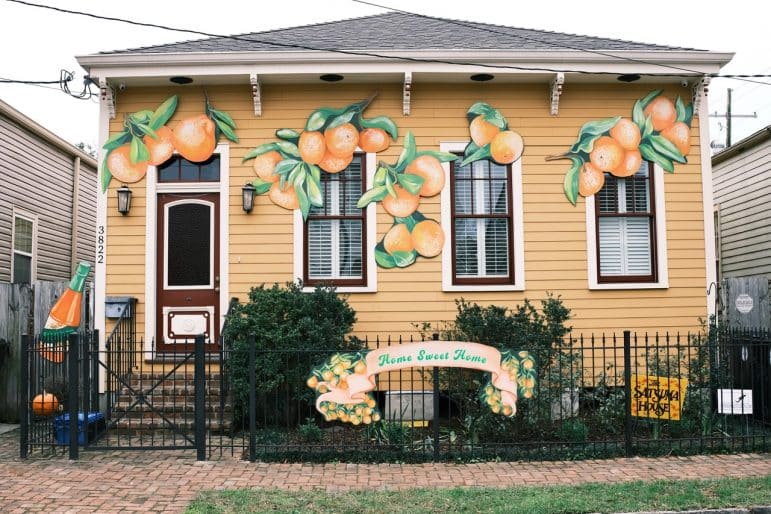 One such new member is Michele Goldfarb, who with her husband, Jeffrey Goldfarb, moved to their house on Constance Street on the Friday before Hurricane Ida.

“As soon as we knew our house was OK after Ida, I asked Stronghold Studio if they were taking on new houses,” Michele Goldfarb said.

The Goldfarbs’ theme is “Home Sweet Home: The Satsuma House.” In addition to professional house float designers, they also made use of the KoHF resource page and added decorations of purchased beads, lights and fringe.

“I think the continuation of Krewe of House Floats is important — we are still helping our neighbors and businesses,” Goldfarb said.  “The house floats bring me joy, seeing the creativity as I walk or drive around.”

The Audubon-Riverside subkrewe also includes businesses along Magazine Street that have decorated their store fronts. Returning for another Carnival season, Del Fuego Nola constructed a festive nod to the pandemic: “When Life Gives You Lemons, Make Margaritas.” 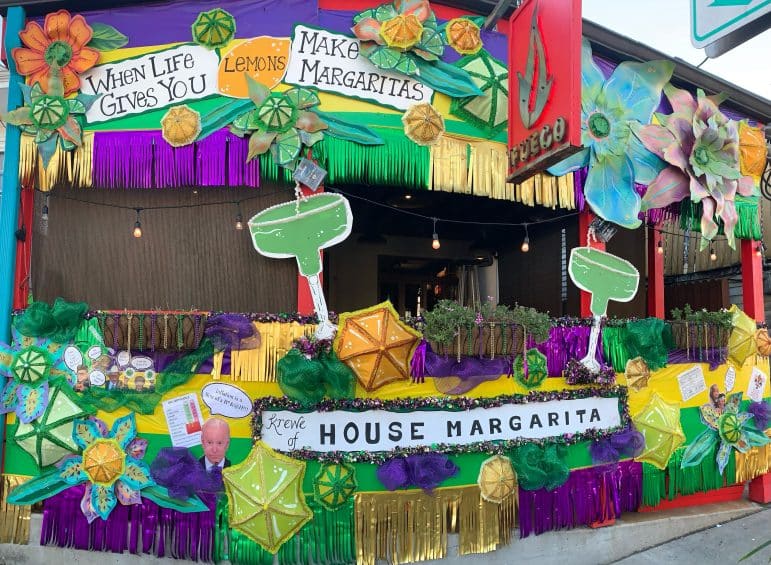 Chef and owner Dave Wright said their float is all DIY except for a couple of large flowers, fringe and lighting. This year’s budget was under $100, so they had to be creative. They repainted flowers and citrus umbrellas from last year, collected scrap wood for the theme signs and made their own satirical cutouts, Wright said.

“We’ve all been served a few lemons this year. We got through the Covid closures and restrictions, but then the city dug in and cancelled the Magazine Street section of the parade route,” Wright said. “We figured the house float would bring everyone a laugh and some joy. We’re gonna truck on through this mess of a year and make some Margaritas.”

Last year, despite the challenges facing restaurants, Del Fuego donated to the subkrewe’s food giveaway. Audubon-Riverside has partnered with Zatarain’s again this year for food giveaways. The group endeavors to give back year-round, not just in Carnival season. The beneficiary of their efforts is the Makin’ Groceries program of the New Orleans Musicians’ Assistance Foundation.

There are two Uptown drop off points where the public can donate non-perishable New Orleans food items, such as red beans, rice and cornbread mix. Home Malone at 4610 Magazine St. and Langenstein’s at 1330 Arabella St. are collecting contributions.

The Krewe of House Floats is a membership organization that brings New Orleans’ Carnival home. In addition being to a substitute for the beloved parades in 2021, the KoHF has a Giving Fund that raised more than $30,000 for Culture Aid NOLA and Grace at the Greenlight.

In 2022, the krewe partnered with the Music and Culture Coalition of New Orleans, continuing the focus on those most affected by the pandemic, including the city’s float builders and culture-bearers.

Throughout the Carnival season, Uptown Messenger will be visiting with neighborhood KoHF subkrewes across Uptown to see how they’re doing Yardi Gras.

Editor’s note: This story was corrected to note that the beneficiary of the Makin’ Groceries program is the New Orleans Musicians’ Assistance Foundation.