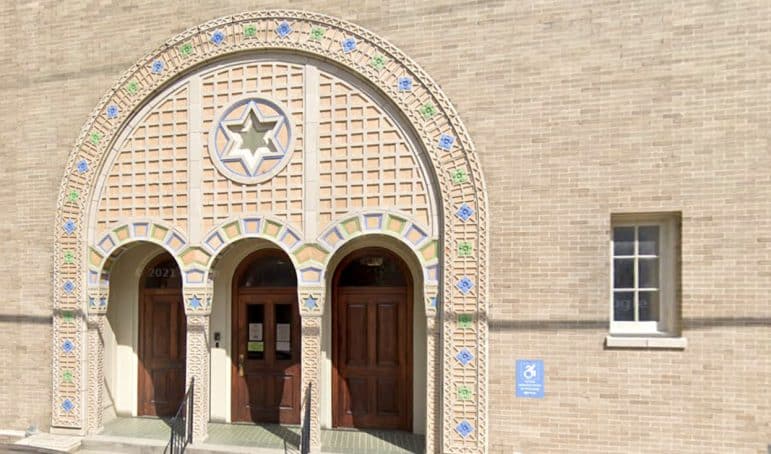 The attack Saturday (Jan. 15) on a synagogue near Fort Worth, Texas, where four people were taken hostage, reverberated across the American Jewish community and heightened concerns about safety and security. Those concerns are particularly acute in Uptown New Orleans, the home not only of two synagogues, Temple Sinai and Touro Synagogue, but also of Tulane University’s Hillel and Chabad houses and the Jewish Community Center.

“What we know, and have known for generations, is that it takes courage to walk through the world as a Jew, and it takes strength to deny those who would harm us the power over our humanity that they seek,” Touro Synagogue posted on its Facebook page after the hostage incident in Texas. “We will continue to be proud of who we are, and we will continue to love others for who they are.”

“We pray for peace for all of those families of all of those who were affected. We pray for the day when we’ll beat our swords into plowshares, our spears into pruning hooks, when none will make us afraid,” said Rabbi Daniel Sherman in a video message to his congregation, referencing words from the Jewish prophet Isaiah.

To help address the community’s questions about safety and security, the Jewish Federation of Greater New Orleans and the Anti-Defamation League (ADL) hosted a virtual town hall on Thursday with representatives from law enforcement agencies and from institutions that combat antisemitism, including the Secure Community Network, the FBI, and various police and sheriff’s departments around the New Orleans area.

“Tonight is a night of optimism, not a time to fear. Our best path forward is to collectively become active, vocal, and aggressive in combating antisemitism, racism, bigotry, and other faces of hate,” said Arnie Fielkow, CEO of the Federation.

If there is one lesson from the hostage situation in Texas it is that proper training saves lives.

A British man entered a small synagogue in Colleyville, Texas, and took congregants inside hostage for 11 hours, demanding the release of a woman held in federal prison on terrorism charges. The rabbi, Charlie Cytron-Walker, slowly got closer and closer to the exit throughout the night, and when he had the chance, he threw a chair at the gunman and ran. All the hostages escaped alive.

According to the New York Times, Rabbi Walker said he was able to keep a cool head and escape because he had attended several security trainings over the years with the local police department, the FBI, the ADL and the Security Community Network, an organization that provides safety resources for Jewish institutions across the U.S.

“We know from the survivors from these events that they were training, and that training helped them save their lives,” said Bradley Orsini, senior national security adviser for the Secure Community Network.

Although all of the hostages escaped physically unharmed, the hostage situation caused intense anxiety and sorrow across the Jewish community, as it comes after years of rising antisemitism. In recent years, gunmen have attacked synagogues and murdered Jews in Poway, California, and Pittsburgh, Pennsylvania.

During the community safety meeting, Aryeh Tuchman, the senior associate director at ADL’s Center for Extremism, shared a chart that showed how reported incidents of antisemitism have risen in the past few years, from 1,267 in 2016 to more than 2,000 in 2019 and 2020. 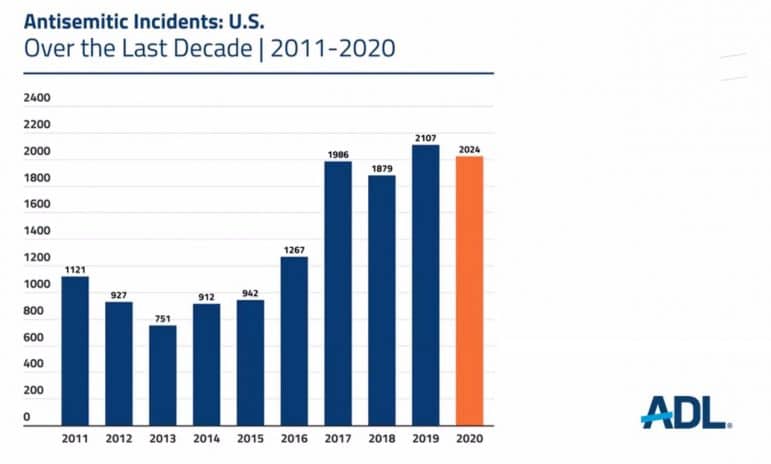 Speakers at the meeting stressed that members of the Jewish community need to be vigilant, check their security systems, and report every single act of antisemitism they may witness. People can report antisemitism at www.adl.org/reportincident.

James Stewart, the former police chief of Hammond and now the Jewish Federation’s security director, walked through steps he was taking to address potential security vulnerabilities across the greater New Orleans region. He is working with synagogues and other Jewish institutions to schedule active shooter drills, risk assessments and security training, and encouraged anyone with questions to reach out to him at james@jewishnola.com. Stewart also said he will be conducting a security assessment of Jewish cemeteries in the area, as they are often targets for antisemitic vandalism.

In addition, Stewart is working to coordinate security efforts with law enforcement; for example, he asked Jewish institutions to send him floor plans for their buildings, so that law enforcement can have those plans ready in case of a hostage situation.

Representatives of the New Orleans Police Department who were at the meeting said that Stewart texted them as soon as news broke about the hostage situation in Texas. As a result, they were able to quickly send extra patrols to Jewish institutions on Saturday.

“If anything happens at the Jewish Community Center, my office will be there first,” said Capt. Eric Gillard of NOPD’s Second District.

“The NOPD stands with you all,” said Capt. Preston Bax Jr. of the NOPD’s Sixth District.

In addition to resources from the Secure Community Network, Jewish institutions are also eligible to apply for federal grants that will reimburse up to $150,000 in security-related expenses, like buying new cameras. FEMA’s Nonprofit Security Grant Program gives out $180 million each year to nonprofits and religious groups that could be targets of terrorist attacks.

Jewish institutions have little difficulty in proving that they’re eligible for these grants, said Michelle Neal, director of education and allocations at the Jewish Federation. “Just by being a synagogue, you are considered at-risk for terrorist attacks….Just by having ‘Jewish’ in your name, you’re considered at-risk,” Neal said.

Fielkow said that the greater New Orleans area got nearly $1 million in security grants last year, making it one of the biggest grants per-capita for any region. Institutions that rent rather than own their building are still eligible for grants.

Neal said that the process for applying for a federal grant can be daunting, but she is happy to work with any institutions to guide them through the process.

“The resources are there for you to be able to make a really solid grant application,” she said. “It’s not for the lighthearted, it’s a serious grant.”

Speakers at the meeting also noted that there will be an important opportunity coming soon to push Louisiana legislators to do more to help nonprofits and religious institutions protect themselves against terrorism and hate crimes.

The legislature unanimously passed a bill last year, HB 242, to start the process of creating a state fund for security grants, so that faith communities will not have to rely on the increasingly competitive race for federal dollars. But lawmakers won’t actually work out crucial details, like how much funding will be available, until the legislative session in March.

State Rep. Dustin Miller, D-Opelousas, sponsored the bill after his own district witnessed terrible hate crimes: the burning of several Black churches in St. Landry Parish in 2019. Aaron Ahlquist, a policy director for the ADL Southern Division, said that these incidents highlight how fighting hatred is a common cause across all faith groups.

“The crisis facing the Jewish community is shared by many in the broader faith community,” he said.

The hostage situation in Texas also brings to light a deeper, more existential issue for the Jewish community: how to remain welcoming and open while still maintaining security. “Welcoming the stranger” is a core Jewish value, and the rabbi at the Texas synagogue even made tea for the gunman before he was taken hostage.

“I think we can overarchingly characterize the position of the Greater New Orleans Jewish community as: how do we balance Jewish values with the clear and present danger of a marked rise in antisemitism?” said Caitrin Gladow, marketing and communications director at the Jewish Federation of Greater New Orleans.