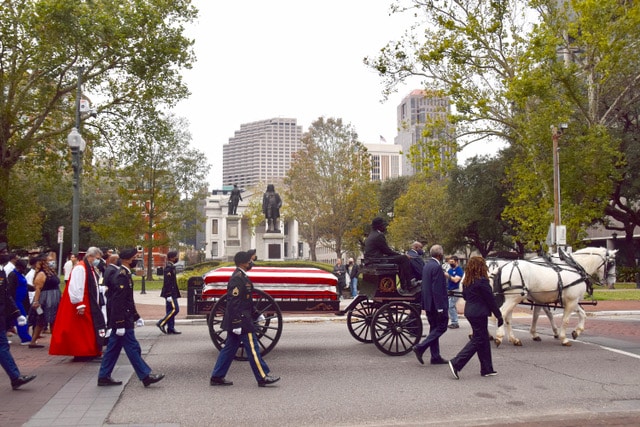 After the the eulogies, the gospel songs, the Victory Belles’ tribute and the solemnity of his funeral service, the men of Brooks’ former Army battalion carried his flag-draped casket outside of the National World War II Museum. The measured cadence of the honor guards’ heels pierced the silence as they slid Pfc. Brooks atop the wagon of his horse-drawn caisson.

That’s when I finally saw his daughter Vanessa. She was dancing.

A brass band that began quietly as the casket approached had erupted into a roar only seconds earlier. Vanessa Brooks joined a throng of second-line dancers on the corner of Magazine and Calliope. Mr. Brooks was going home, and his family was joyful on his behalf. He was 112.

A U.S. Army honor guard from the 91st Brigade Engineer Battalion escorted the caisson that would bear her father’s procession down the streets of the city.

The 91st faced stiff competition as other units vied for the mission. The soldiers told of how proud they were to have won out, and how they jumped in their vehicles, driving through the night from Fort Hood, Texas, to represent one of their own. The unit also provided a 21-gun salute at the burial, and their 1st Calvary bugler played taps at the service and the interment. 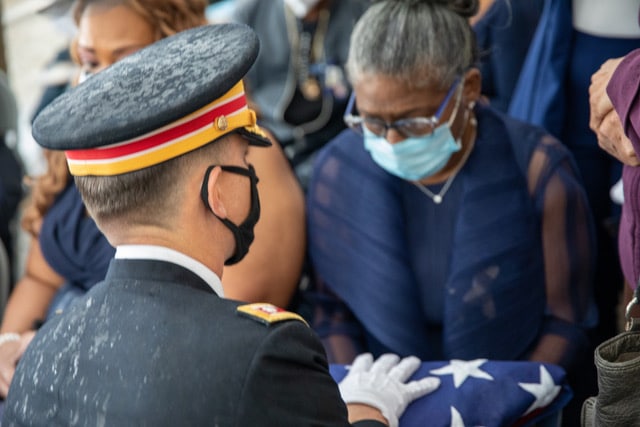 Vanessa Brooks receives the burial flag from a member of the 91st Engineer Battalion honor guard.

Mr. Brooks’ service meshed the very best of solemn military tradition and joyous New Orleans celebration as his family and friends danced a mile down Camp Street before entering the motorcade, followed by a parade of jeeps.

I had met Lawson and his toddler son at Mr. Brooks’ Central City house a few weeks earlier. He told of how his grandfather’s former pastime of sitting outside watching the world go by on the porch of his Clara Street shotgun had lost its shine and how he wanted to join his late wife Leona at Mount Olivet cemetery.

The delivery of Lawson’s anecdote recalled Mr. Brooks’ laughter. He was always laughing, and he was a master of the deadpan delivery.

Sadly, Mr. Brooks’ porch-sitting ended several months back. Though still cheerful, alert and talkative, he had spent the last few months of his life in bed, in and out of the Veterans Affairs Hospital, and then, gratefully, back at his house. He talked frequently of being ready to move on.

On the morning of Jan. 5, I received a text from Vanessa Brooks. The text included an emoji of a shining sun: “Good morning, my dad passed this morning.”

Later, Vanessa told me that he had died giggling. I was not surprised. 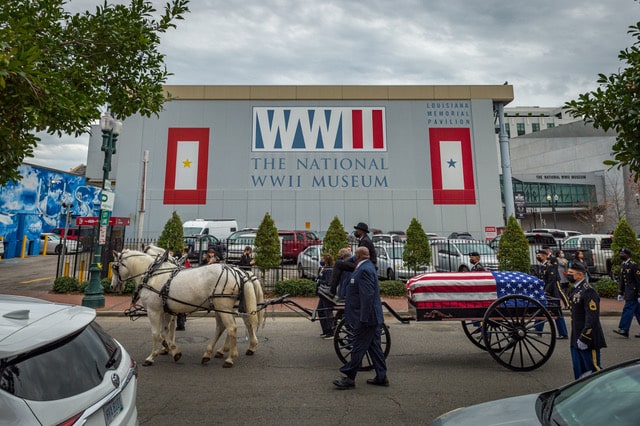 The funeral service for Lawrence Brooks was held at the National WWll Museum.

As with his birthday parties, Brooks’ service was fittingly held at the National World War II Museum under a suspended bomber much like the ones he flew inside over the South Pacific in 1942. The museum staff had become family friends in the six years since they began celebrating Brooks’ life on his birthdays.

Vanessa said the museum handled her father’s funeral for her and how grateful she was to them. During the service, Tom Gibbs, the museum’s special programs director, read a poem written in Mr. Brooks’ voice, “A Tribute to My Daughter Vanessa.”  The poem told of her personal sacrifice and the decades of her life she gave to care for her father and how much it meant to him. It ends:

“So once again, Nessa I thank you
For all your tender loving care
And God has a special place for you in heaven
And I will be waiting for you right there”

Mr. Brooks was such an appreciative soul, he would have enjoyed it. 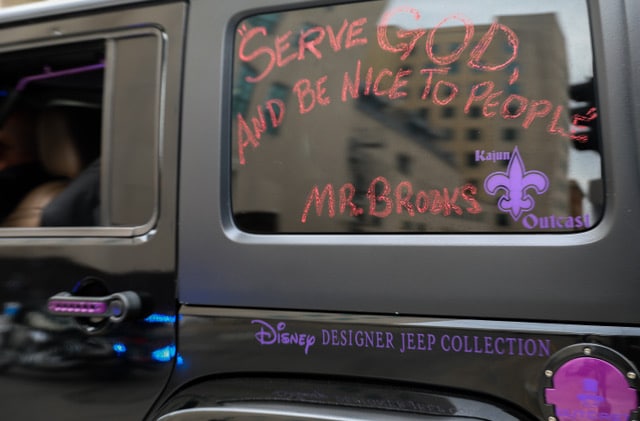 I was so lucky to meet him, interview him, attempt to bake his favorite apple jelly cake – “none of that sugary frosting.” When I learned he had no Army uniform and dearly wanted one, I spearheaded a fund and found him an accurate replacement summer enlisted WWII uniform. He was so delighted when he first saw it. I will never forget his turning his new garrison cap in his hands, over and over again, smiling, before he put it on his head.

My favorite moment occurred after days of research when I took him on a virtual map journey down the streets he once drove in Townsville, Australia. He was excited at the marvel and pointed out his old haunts.

I also found the names and photos of some of his officers and photos of his unit’s USO parties in New Guinea. He loved that and thanked me for bringing his old friends back to him. That really gave him a laugh, and his funny stories ensued.

I was fortunate to spend time with him and Vanessa. I will miss him dearly.

Mr. Brooks is survived by his three children, two stepchildren, 11 grandchildren, 22 great-grandchildren and many friends.

I will always remember the last thing I saw as I left the interment service. His personal motto written on the windows of a passing car: “Serve God and be nice to people.”