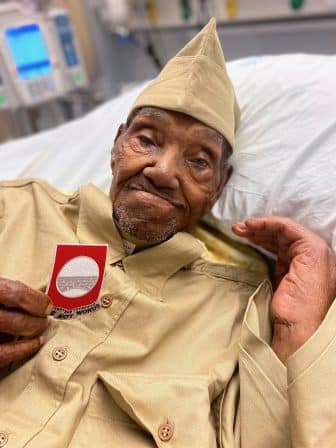 Brooks had been in and out of the Veterans Affairs Hospital several times in recent months, but was still alert, enjoying the holidays and watching his beloved Saints play until the end. He was able to relish the Saints’ win against the Panthers on Sunday.

He died as he had planned — in his own bed.

Brooks had become a local celebrity, celebrating his birthdays at parties thrown at and by the National World War II Museum. He’d received numerous gifts and over 10,000 birthday cards over the years in recognition of his service during the war.

On Nov. 11, 2021, Brooks received a call from President Joe Biden, wishing him a happy Veterans Day and thanking him for his service.

For his last birthday, due to the pandemic, the celebration was brought to his house in the form of a drive-by party last September. Brooks danced on his porch serenaded by the museum’s singing trio, the Victory Belles, while a military flyover banked down his Central City shotgun house. 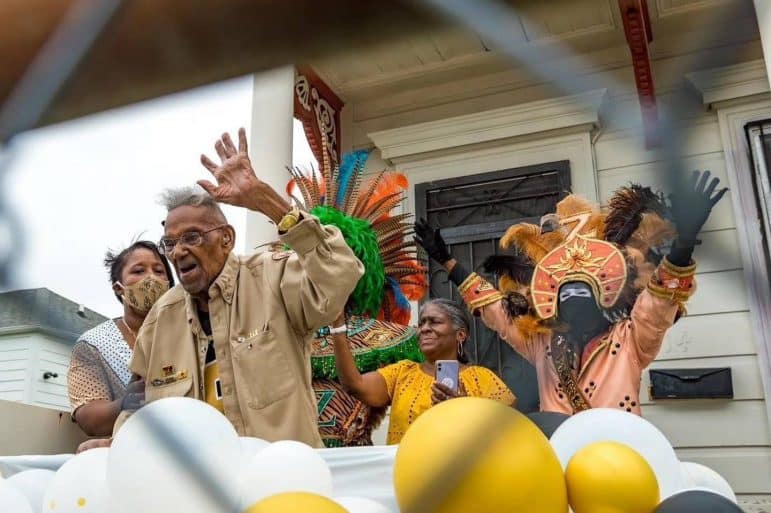 Lawrence Brooks celebrates his 112th birthday on Sept. 12 with friends and his daughter Venessa, left.

The son of sharecroppers, Brooks was one of 15 children. He was born in 1909 just north of Baton Rouge in Norwood and was raised outside of Stephenson, Mississippi, a small sawmill town where his family moved for work during the Depression.

He later moved to New Orleans to live with an aunt on Magnolia Street in Central City and was working at a Jefferson Parish service station when he was drafted. He first entered the Army in 1940.

Before the United States entered the war, he participated in the Louisiana Maneuvers, where 400,000 soldiers converged on the state for readiness exercises in response to Germany’s invasion of Poland and France.

Brooks was discharged after his obligatory year of service and was back at work in November 1941. A few weeks later, after the attack on Pearl Harbor, he returned to the Army. “There was no question,” said Brooks in one of his many oral history interviews. “They just came right back and got me again.”

He was sent by train at Camp Shelby in Hattiesburg, Mississippi, where he joined the 91st Engineer Battalion, a unit comprised of 1,193 Black enlisted soldiers and 25 White officers. 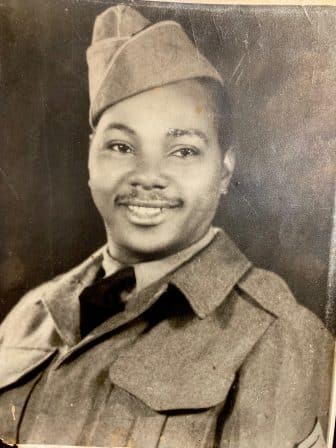 He said that he journeyed to Pennsylvania for vaccines and additional training before traveling to the South Pacific theater of operations. “Indiantown Gap is where I got my inoculations before we left,” said Brooks in an interview with Uptown Messenger late last year.

In March 1942, Brooks found himself in New York harbor heading to war aboard a “huge” converted ocean liner. He recounted that the voyage lasted close to a month amid a zig-zag course dodging submarines. His destination was Queensland, Australia, a key defensive area in the war against Japan.

Brooks’ unit arrived in Brisbane in early April and ended their journey in Townsville, Australia. The private first class loved to reminisce about the Australian people’s acceptance of the thousands of African-American soldiers who served there and the  absence of societal racial discrimination. He experienced a freedom unheard of in the Jim Crow South.

Brooks, like most in his battalion, didn’t see official combat, though he remembered digging and diving into foxholes on numerous occasions when the Japanese strafed his unit near Townsville and New Guinea.

He recalled rowing across a lake the size of Lake Pontchartrain to Thursday Island during nighttime bombing raids. The soldiers knew Thursday Island, the site of a sacred Japanese graveyard, wouldn’t be bombed.

He was put to work as a driver, valet and cook for three officers, two lieutenants and a captain. During an interview in November, Brooks spent the day looking at photographs of his old unit, their jazz band, USO parties and his favorite haunts in Townsville. He gazed at newspaper archives of some of his officers and laughed as he recounted what he termed “shenanigans.”

He cooked meals for the officers at the joint mess hall and delivered them back to their camp. The White officers ate separately from the Black soldiers. “We had our tents, and the Whites had their tents,” Brooks said. “They were next to each other.”

His unit built numerous frame buildings, Quonset huts, roads, hospitals, housing, shops and recreation centers. Brooks said they left the South Pacific in 1944 and that he separated from service in 1945. When he returned from service, he worked as a forklift driver until retiring in his 60s.

His daughter and caregiver has recently given several interviews lamenting how Black WWII veterans, including her father, were denied their GI Bill benefits. She said he often spoke of how much he wanted to go to school after the war.

“My father earned the Good Conduct Medal, Meritorious Service Medal and Presidential Unit Medal — then he was left behind,” Vanessa Brooks said. “He served the same five years. He was bombed and strafed in the South Pacific but was not offered a low-interest bank loan, a reduced down payment for a house, or an education.” 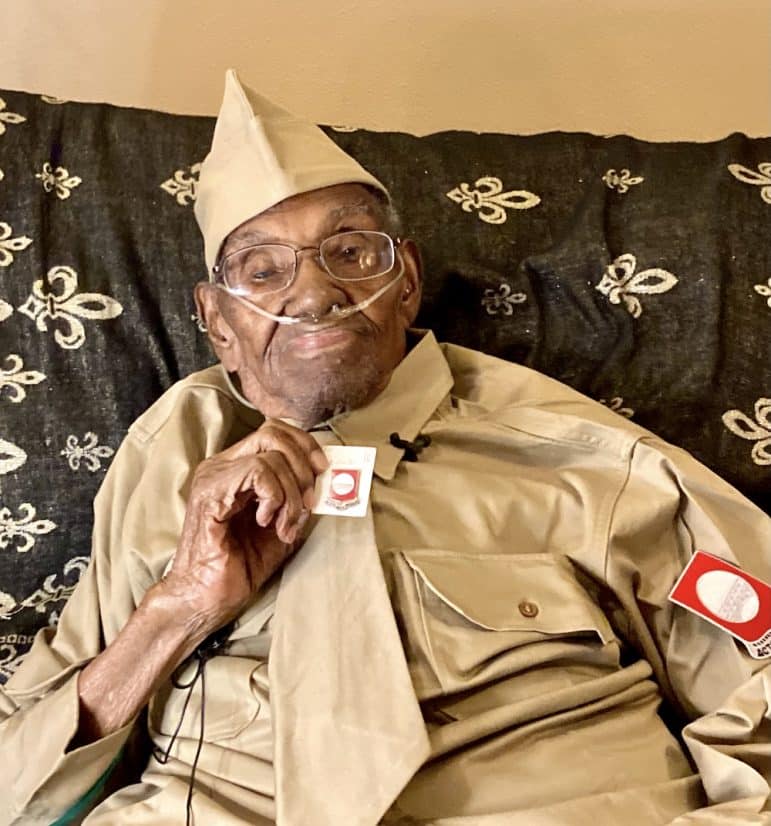 Brooks had recently requested a new U.S. Army uniform to replace the original he’d lost 16 years ago in Hurricane Katrina. He was presented with an authentic reproduction World War II uniform and his old unit’s badge during a short hospital stay in early November.

Brooks immediately recognized the components of the summer service uniform he wore while serving in the Pacific Theater. When he was back home at his house in Central City, posing in his khakis, he smiled, turning his new garrison cap over and over in his hands before placing it on his head.

He then inspected his unit insignia and badge. The current 91st Engineer Battalion recently sent him replacement medals and a certificate of appreciation for his service. But, unfortunately, his good conduct medal is still lost; his daughter was trying to find him a replacement.

When asked recently what he would like his legacy to be, his thoughts returned to the war. “I would like to be remembered as a strong man,” Brooks said, “a good soldier.”

Brooks is survived by five children, five stepchildren, and dozens of grandchildren and great-grandchildren, according to the Associated Press. He lost his wife, Leona, shortly after Hurricane Katrina.

The funeral arrangements are pending. Vanessa Brooks said she plans to bury her father wearing his new uniform, as he requested.