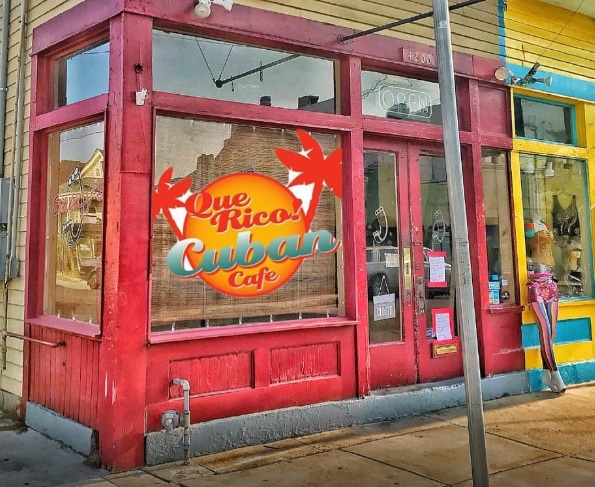 The owners of Que Rico! Cuban Cafe on Magazine Street say their restaurant’s future could depend on an alcohol permit.

Since the pandemic started, the small restaurant has lost 65% of its customers, said Iderlin Donna Carrillo, who owns the business with her husband, Richard Rivera. Last week, they closed temporarily, citing staffing shortages.

Carrillo and Rivera said they need an alcohol permit to increase sales and profitability during the pandemic but worry they won’t receive approval in time.

“We were rocking and rolling without liquor before the pandemic,” Carrillo said. “But we need it now to survive. People come in, then walk out when they realize we don’t serve cocktails with our meals.”

Que Rico! Cuban Cafe, a small Havana-inspired café on Magazine and Milan Street, is still achieving a bustling lunch service on Uptown’s restaurant corridor, the owners said, but they fear it’s not enough. They need to attract the dinner crowd and the higher profit margins associated with alcohol.

“I’m worried that if we don’t get a liquor license soon enough, we’ll have to shut down,” Carrillo said. “The permitting decision will make or break our small business. The liquor license would give us the edge to keep us open, keep us fully staffed.”

Although the building is in a HU-B1 zoning district, which permits restaurants to serve alcohol, it is also in the Magazine Street Use Restriction Overlay District — which requires the granting of a conditional use before they can apply for a license.

New Orleans’ permitting process has required the couple to hire attorneys, architects and a permitting consultant to smooth the way to a liquor license, which still has no guarantees, Carrillo said.

The restaurant owners have begun the process that they expect to cost more than $10,000, including the nearly $2,000 price tag for the application to sell wine, beer and hard liquor.

The restaurant originated in Slidell, where they had a successful run before losing their lease, according to Carrillo. “I got my liquor license in Slidell on my own — without having to pay anyone to represent us,” Carrillo said. “I got it in 45 days and paid less than $2K.”

After having difficulty finding another location across the lake, the couple relocated their business to New Orleans. They opened on Magazine and Milan in 2019, in a corner building that formerly housed the original location of Ignatius Eatery and, later, Saucy’s BBQ.

Those restaurants did not have a liquor license, which would have stayed with the building. So they need to first apply for a conditional use, which involves City Planning Commission review and City Council approval.

“If we knew this particular building had so many restrictions, we wouldn’t have signed the lease,” Carillo said.

“If the city had told me it was only a two-month wait, I’d feel better about holding on,”  Carrillo said.

Jenna Burke, land-use director for former District B Councilman Jay H. Banks, said eight months is the maximum duration for the process, but she doesn’t think it will take that long. “It will move more quickly than maybe six months, hopefully,” Burke said. “They can’t prioritize anyone over anyone else. That would push someone else back.”

The City Planning Commission, which oversees conditional use requests, is currently understaffed, Burke said, with only 40% of the staff it needs to review and analyze land-use requests, conduct studies and make recommendations.

So far, Carrillo and Rivera are on track and ticking off all the boxes. Following guidelines, they recently held a Neighborhood Participation Program regarding their pending request. “It was a very positive meeting, and the neighbors were very supportive,” Carrillo said.

The couple also approached other neighboring restaurants, who all voiced their support of the restaurant serving alcohol. “All of our neighbors have been great,” Carrillo said. “And we have great customers.”

Que Rico! markets itself as an authentic Cuban restaurant, the only Cuban restaurant located Uptown. The menu features the famous pressed sandwiches known as Cubanos and dozens of other Cuban foods such as tamals, ropa vieja, fried yuca and entrée dinner platters of the island’s cuisine.

Carrillo, who first learned to cook from her Cuban mother, laments not being allowed to serve mojitos and daiquiris, both traditional cocktails invented in Cuba. The café currently serves alcohol-free mojitos and is BYOB with no cork fee.

Since Que Rico! Cuban Café Uptown temporarily closed last week due to staffing issues, Carrillo said, they are using the downtime to put the finishing touches on a second location in Slidell. Carrillo said they’re 85% ready with their north shore restaurant.

The restaurateurs hope to reopen on Magazine Street.