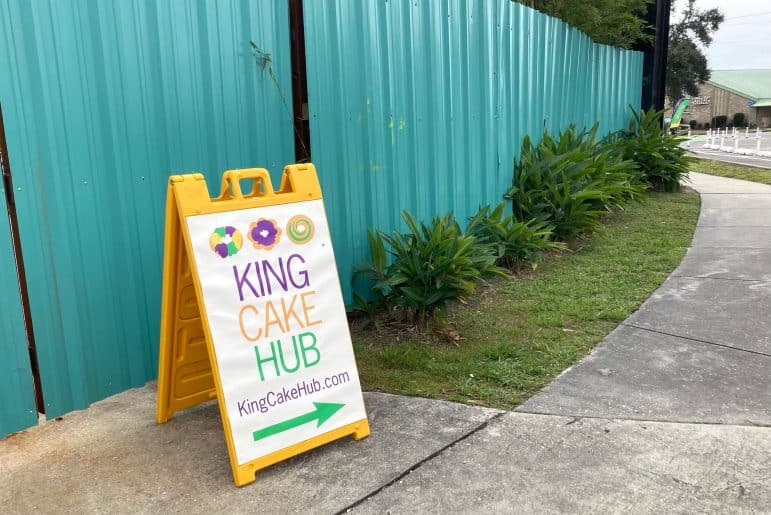 The King Cake Hub is open through Lundi Gras at 1464 S. Broad

The King Cake Hub, a Carnival pop-up, opened for its fourth season Jan. 6 with its traditional Twelfth Night kickoff party at a new location next to the Zony Mash Beer Project at South Broad and Thalia Street.

There was something missing, however: the energetic presence of King Cake Hub co-founder Will Samuels.

Samuels died in September 2021 at 52. His widow, Jennifer Samuels, is carrying on the tradition in his absence. The two shared an unbridled love for all things Carnival, and she plans to continue infusing King Cake Hub with that enthusiasm.

The King Cake Hub is the brainchild of the Will and Jennifer Samuels. Samuels gives most of the credit to her late husband, but the seeds were planted when she began making king cake at their home, perfecting it by the time the 2011 Carnival season rolled around. At that time, the couple was operating two businesses, Pizza Nola and La Dolce Nola.

“Will and I used to try a lot of different king cakes with our daughter, Livia,” Samuels said. “We then thought of the concept of selling them out of Pizza Nola. From that, it developed into having a dedicated seasonal space to sell king cakes from many different bakeries all in one location. So the King Cake Hub was born.”

The couple founded the King Cake Hub as a standalone pop-up in 2019, taking over the Mystère Mansion, home of the Mortuary Haunted House, near the cemeteries on Canal Street. By the second year, it was carrying 50 different king cakes from 12 bakeries.

During the 2021 season, the year Covid halted many Carnival traditions, the King Cake Hub gave New Orleanians a taste of Mardi Gras from a new home at the then-shuttered Broad Theater.

For 2022, it has more than 60 varieties of king cake and two locations: the Zony Mash spot 1464 S. Broad and a smaller outlet in The Historic New Orleans Collection gift shop in the French Quarter. 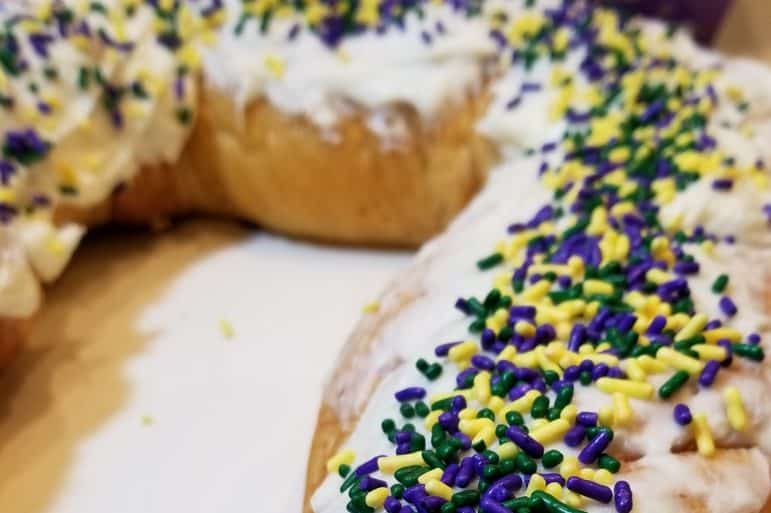 The Epiphany King Cake, a best-seller, was a collaboration between the King Cake Hub and Gambino’s Bakery.

Samuels has past sales to guide her as to how many and what flavors to stock. In the event that the pop-up runs out of that day’s king cakes, she posts a notice on Facebook,  Instagram and Twitter, so customers can check before starting out.

“Ideally, we want to sell the last king cake right at closing time,” Jennifer said. She tells customers to get there early — as the day progresses, the choices dwindle.

The high volume means the king cakes tend to be fresh. And the Hub often has some unique offerings from bakers trying something new to gauge customer reaction.

Customer Bill Harris was planning on Sunday to buy the cream cheese filled cake that his daughter Violet likes. “But we saw a posting about the goat cheese and apple filling that we had not tried, so we both changed our minds,” he said. 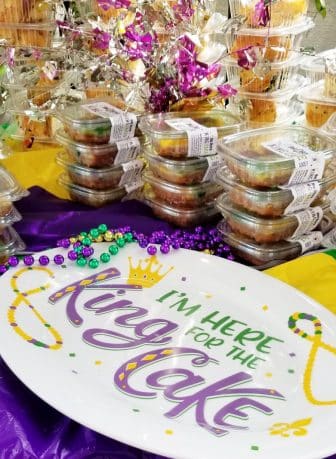 He also likes the fact that customers chat with each other, which offers a good source of information about the wide choice of cakes.

“I’ve been coming for two years,” he says, “and it gives you a chance to try new king cakes. The social media postings are so valuable; they tell you a lot.”

Uptown resident Patricia Ogden also likes the wide selection, she remarks as she stands in front of the floor-to-ceiling shelves. “I like the idea of a hub and to just be able to go to one place instead of running around to different shops — and you might get there and they are sold out,” she said.

Ogden, who has hosted king cake tastings for her friends, said the King Cake Hub allows customers to try different varieties, adding, “Why didn’t I think of this?”

Jay Forman, who co-owns Gracious Bakery with his wife, Megan Forman, said Gracious has been selling its king cakes and its DIY King Cake Kit at the Hub for the past two years.

“I just think it’s a great idea,” Forman said, “and partnering with Zony Mash was a good plan.”

The Zony Mash location is open seven days a week from 8:30 a.m. until 6 p.m. It will stay open through Lundi Gras, Feb. 28. Masks (those that cover the nose and mouth) are required.

Will Samuels presents the King Cake Hub selection in 2020.