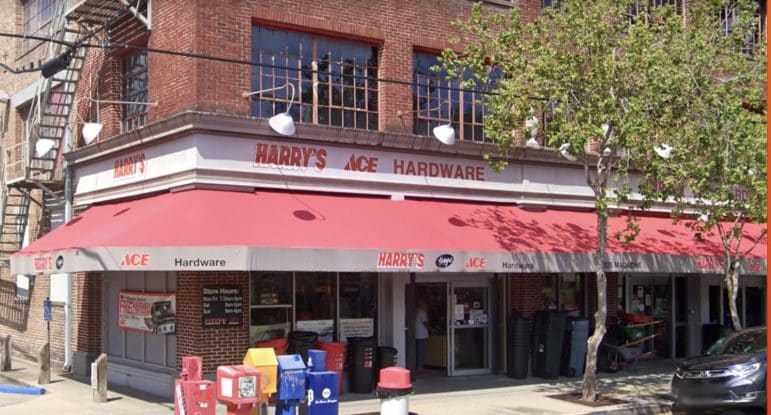 It turns out that grabbing a Hubig’s Pie on the way to the register at Harry’s Ace Hardware was a small pleasure we took for granted. For over six decades, Uptowners assumed the store with the friendly staff  — and the pies – would always be there.

Harry’s Ace, like the fried pies that used to be on their top shelf, is soon to be filed under the most dread of New Orleans idioms, “ain’t dere no more.” The latter hopes to return next year, but after more than a century, the former, Harry’s, is hanging up its hat.

Sometime next spring, the familiar shop under the red awning on the corner of Magazine Street is shutting its doors.

The closure was announced Dec. 2 and quickly spread on social media sites, with thousands of locals lamenting the news. “Harry’s closing is such a loss,” tweeted Kevin Pedeaux, owner of CR Coffee across the street from the hardware store. “Everything that breaks is going to take a lot longer to repair at the coffee shop. What will I tell everyone the coffee shop is near now?”

For almost a lifetime, anything the neighborhood needed, including the kitchen sink, was only a jaunt down Magazine Street. Generations of New Orleanians headed to the store for more than the long matches to light the floor furnace —  it was all the extras found roaming the aisles. A bus ride to Harry’s with a grandparent was the equivalent of going to the mall. Children knew that after the keys were made and the paint mixed, the rows of candy and pies were the last stop before paying the bill.

The store’s owners have an amazing knack for knowing exactly what we need and when we need it. When a hurricane is in the Gulf, everyone runs to Harry’s. Building materials, kitchenware, appliances, hardware, paint, cleaning supplies, shelf paper, toys and even groceries are only some of the 30,000 products that fill the store’s shelves.

If you’re moving in or out, a quick trip to Harry’s equals an entire day of shopping in the suburbs. Need Mardi Gras ladders, a new tin trashcan, a washtub for the dog, porch swings, clotheslines, tomato seeds, and an emergency can of Raid? Uptown’s answer is Harry’s.

“I’m very sad about the store closing,” said Central City resident René Dugar. “It’s a great resource for people with older homes. They have knowledgeable personnel helping. Home Depot is not the same.”

The neoclassical building that Harry’s leases was initially listed at over $7 million. It was purchased by Verdad Real Estate and Construction Services, a real estate development corporation owned by local Joe Mann Jr. and partners, who plan to renovate the existing structure.

“We’re restoring the building façade back to its original 1920s look,” Mann said. “It will be a complete historic renovation.”

Mann said that the second and third floor — now used to store Harry’s inventory — will become residential. Part of the rear first floor will become parking. The building’s storefront on the ground floor will continue to be retail space facing Magazine.

Construction will begin in the summer of 2022 and is planned to take over a year. Mann said the company’s goal was to reduce Harry’s lease to the ground floor and keep the hardware store, but after 100-plus years, the family-owned business declined the offer of a smaller footprint and decided to close.

A Harry’s Ace representative told Uptown Messenger that the reduced footprint did not affect their decision. The family has pointed instead to “rising costs, natural disasters and increasingly stiff competition from e-commerce outlets.” 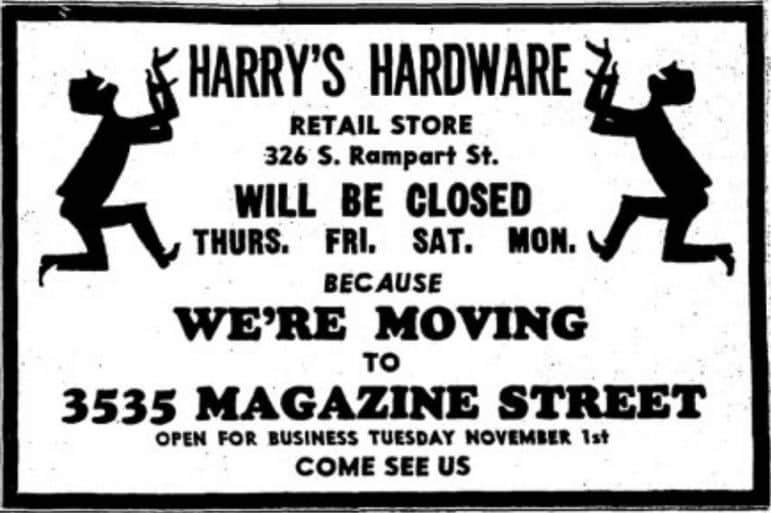 “In 1910, Harry Offner opened a small hardware store on S. Rampart,” reads the 75th-anniversary announcement the store ran in the Times-Picayune in 1985. “With hard work and dedication, the business grew and prospered.”  One hundred and eleven years later, the hardware store is still operated by the third-generation descendants of Harry Offner.

Offner ran that business until his death in 1951. It was the next generation — his sons-in-law Jake, Charlie and Sid — that moved Harry’s Hardware to the corner of Magazine and Foucher streets, opening on Nov. 1, 1960. A 1961 ad in The Times- Picayune touted “free parking, free delivery and charge accounts invited at Harry’s Hardware.”

By 1985, there were six Harry’s Ace Hardware stores in the New Orleans metro area. Today there is only one; soon, there will be none.

“It was our honor to have served the city of New Orleans for 111 years,” said Scott Fox, a family member and vice president of operations. “It’s sad to go, and we’re even sadder for our employees.”

For Uptowners, now would be a good time to gather the knives that need sharpening and the torn door and window screens that need to be repaired and bring them to 3535 Magazine.