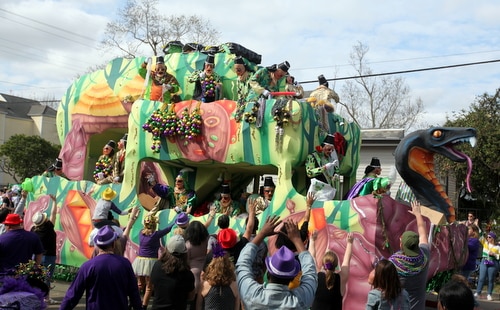 The Krewe of Thoth rolls on Magazine Street in 2020.

The Magazine Street leg of many parade routes has been eliminated, she said at a press conference. Magazine Street — where neighbors gather for a more laid-back parade experience — is a favorite viewing spot for many Uptown residents.

The changes are necessary, officials said, because of staff shortages in the city’s public safety agencies, including the police, emergency medical and fire departments.

On Mardi Gras Day, Rex will start at Napoleon and Carondelet and then roll on its original route. The Zulu parade will begin on Jackson Avenue.

All krewes are asked to make sacrifices, Cantrell noted. Officials were able to accommodate most of the idiosyncratic routes of Zulu and Endymion, though both are taking a shorter path through the Central Business District.

One Uptown krewe with a famously idiosyncratic — and altruistic — route is the Krewe of Thoth, which presents a meandering daytime parade on the Sunday before Mardi Gras.

Thoth’s historic Uptown route was created to pass in front of 14 institutions, such as Children’s Hospital and the Lighthouse for the Blind, for people with disabilities and illnesses, people who are not able to experience Carnival parades on the streets and neutral grounds.

Penny Larsen, spokesperson for the Krewe of Thoth, issued the following statement on Tuesday:

“The Krewe of Thoth is very disappointed with the City of New Orleans that they would not give our route serious consideration since it passes Children’s Hospital and many Uptown facilities where we have brought a touch of Mardi Gras since 1947.