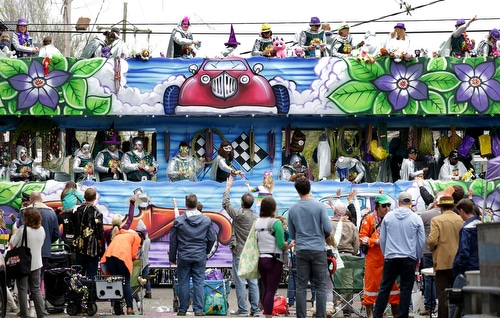 While most New Orleanians are glad the parades will return to the streets for the 2022 Carnival season, the route changes will hurt many of the small businesses along Magazine Street.

The 2022 routes, announced on Tuesday by Mayor LaToya Cantrell, eliminate the  stretch of Magazine Street from Jefferson to Napoleon Avenue, where nine krewes begin their procession, and the longer stretch of Magazine from Henry Clay Avenue that the Krewe of Thoth commands. Instead, these parades will all line up at Napoleon and Prytania Street.

The owners of Tito’s Ceviche and Pisco at 5015 Magazine were expecting the revenue from the parade-viewing crowds to help with their financial recovery from the pandemic.

The other businesses along Magazine Street, she said, also are displeased with this decision.“We were counting on this revenue from parades to help get us back on track, especially because, as you know, the pandemic has had such a negative effect on the restaurant industry.”

And the expected crowds meant that Tito’s could staff up and increase employees’ hours. “We are not going to lay anyone off,” Lock said. “But the lack of parades means that we will not have the anticipated business because customers will go further down. So, ultimately, we will reduce staff hours — meaning they will suffer a loss of income.”

Le Bon Temps Roule, the iconic tavern on Magazine and Bordeaux Street, is a popular gathering spot for parade watchers, generating revenue the owners and employees count on.

Joe Bikulege, a partner in Le Bon Temps Roule, said that he uses the extra income from parades to pay property taxes and maintain a fund for emergencies. “You never know when something will go wrong with a building,” Bikulege said.

The money is especially needed now, he said, after the pandemic-related losses. The bar and music venue was closed for nine months, then operated at 25% capacity.

“This is now year three that we are having to suffer,” Bikulege said, adding that the relief for bars in the American Rescue Plan was little help. “The bar and restaurant restoration fund ran out almost immediately — and no one seems to care.”

And like other business owners, Bikulege lamented that it is the employees who will suffer. He thinks the city should have a plan to let business owners deduct sales taxes over the next five years as a way to give relief in these difficult times, times made more difficult for his business due to the change of the 2022 parade routes.

In a press conference on Tuesday, Cantrell cited public safety as the reason for the shorter parade routes. The parades strain the city’s police, fire, medical and other emergency departments, which are already enduring significant staff shortages.

Cantrell stated in a press release that the changes were made after extensive consultation with all involved public agencies and the Mardi Gras krewes. 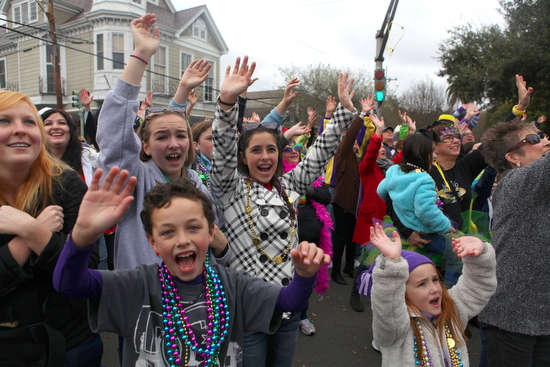 Crowds pack the corner of Magazine and Jefferson during the Okeanos parade in 2012.

Reginelli’s Pizzeria on Magazine and State Street, near the traditional Magazine route, gets a major revenue bump even when the parades don’t pass by the restaurant. And it is especially busy on the Sunday before Mardi Gras when the Krewe of Thoth rolls by its front door.

“We were disappointed, but not surprised” is how Reginelli’s Assistant General Manager Jay Smith put it, when asked about the shortened Uptown parade route. Are they usually busy during parades? “Oh, yes!” Smith said. “This was going to be a big chance for us to make much needed extra money during the parades.”

Like Bikulege and Lock, he cited the adverse effect the pandemic has had on restaurants and restaurant workers. When the Reginelli’s further down Magazine in the Garden District closed in May 2020, the franchise owner cited pandemic-related hardships as one of the reasons for the shuttering.

Reginelli’s at Magazine and State is surviving, Smith said, but it will mean fewer staff hours, which will cause the workers to lose money.

“Thoth and Muses, and other parades, are big money makers for us,” he said. “Having them roll on Magazine would give us some leeway, and make a positive difference to our profit margin.”

Lock also said that Thoth and Muses were a boon to them, as well as Cleopatra the week before.

And they all said how much they love all the parades on Magazine Street. They make the customers and the staff happy.

On another note, Lock commented: “So the parade goers will be more packed into the shorter route. How can that be good in the time of the virus?”

2 thoughts on “After pandemic losses, Magazine Street businesses were counting on Carnival parade revenue. Then the routes changed.”