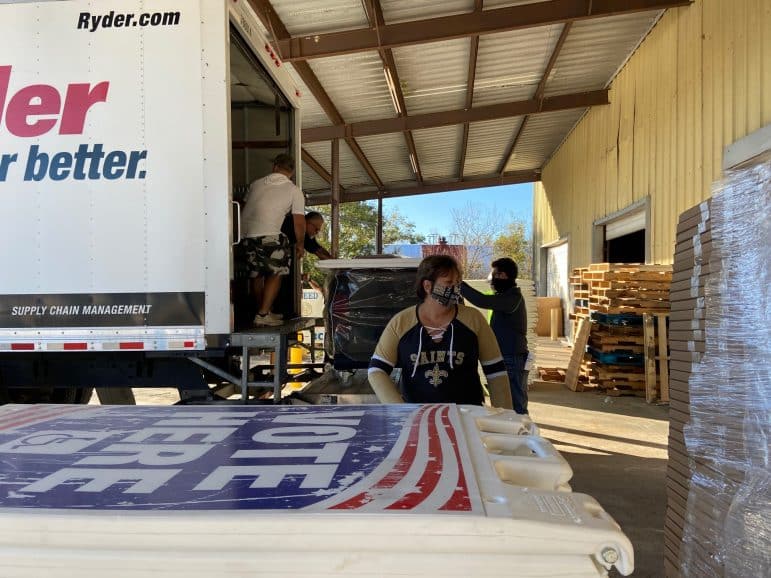 Voting machines and other equipment are loaded onto trucks to be delivered to polling locations in 2020.

With Covid-19 and Hurricane Ida, plus Jamie Winston’s torn ACL and Michael Thomas’ ankle injury, New Orleans voters are burned out. Although we are in the process of electing a mayor, City Council members and other municipal officials, many New Orleanians don’t even know or care about what’s on the ballot. The early polls are proof of this.

We’ve already passed the midway point in early voting for the Nov. 13 elections. As of Tuesday evening (Nov. 2), only 11,166 Orleans Parish voters (just over 4% of those eligible) had cast their ballots. By Wednesday evening, that number rose to 13,248 ballots cast. Optimistic pollsters are predicting that number could double before early voting ends on Saturday (Nov. 6).

Black voters make up 67% of those who have already went to the polls while White voters account for 29%. Women are outvoting men 61% to 39%. Democrats make up 82% of those who have voted versus 8% of Republican voters and 10% of voters who are registered with another political party or no party at all. Currently 60.5% of all early votes have been cast in person, with the rest cast on absentee or mail-in ballots.

Who is registered to vote in Orleans Parish? As of this week, New Orleans has 267,217 registered voters — more than any other parish except Jefferson Parish (276,566) and East Baton Rouge Parish (292,203). Black voters still comprise the largest racial group (55%) followed by White voters (36%) and voters of another race or ethnicity (9%).  Democrats have always had a stronghold in Orleans Parish and still account for slightly more than 64% of voters. Republicans currently represent only 10% of voters. The largest growth has been with voters who do not identify as either Republican or Democrat. They now represent 26% of all voters in Orleans Parish.

When the final votes are counted, who will have gone to the polls? Voters over the age of 65 are sure to turn out, just like they always do, as well chronic voters — the folks who vote in every election even if the office of dogcatcher is the only item on the ballot. Beyond that, it will be up to the candidates to have identified voters who agree with their platform and have sufficiently motivated them to cast their ballots. The most committed will likely vote early. That’s why targeted voters are receiving a plethora of mail pieces, social media posts and text messages.

Voters still have three more days to visit one of five polling locations in Orleans Parish to cast their votes: City Hall, the Voting Machine Warehouse, the Algiers Courthouse, the Lake Vista Community Center and the Lions Eye Room at LSU Health Sciences Center. Voting takes place through Saturday (Nov. 6) between 8:30 a.m. and 6 p.m. The deadline to request an absentee ballot is No. 9 by 4:30 p.m. All absentee ballots (other than military or overseas) must be received by the Registrar of voters by Nov. 12 at 4:30 p.m.

WHO ELSE IS RUNNING FOR ORLEANS PARISH SHERIFF?

Quentin Brown Jr., the owner of a landscaping company, is running as an Independent who believes he can best find solutions to the city’s crime problem. Brown is known for calling Gusman out during forums and his pithy quotes from Dr. Martin Luther King. He claims to be the only candidate who could beat Gusman in a runoff.

Janet Hays is the director of the nonprofit Healing Minds NOLA, whose mission is to address serious mental illness by creating alternatives to homelessness and incarceration. She was a strong proponent of turning the former Charity Hospital into a one-stop facility for the purpose of “critical mental health needs” across the region. Hays has been preparing to run for sheriff for three years and has been studying best practices in law enforcement. She would demand better screening of inmates during intake. Hays supports the need for special treatment facilities and said on her Facebook page that “building mental health jails is a national trend.”  Hays also supports the hiring of additional police officers to establish crisis intervention.

Susan Hutson is the progressive candidate in the race and Gusman’s most formidable opponent. She is supported by prison reform advocates and other like-minded groups who oppose the construction of a special needs jail. Before serving 11 years as the city’s independent police monitor, she was a police oversight official in Austin and then Los Angeles. Hutson is also relying on her previous experience as a criminal defense attorney in Houston and a prosecutor in Corpus Christi. She misses few opportunities to talk about the many problems at the Orleans Justice Center during Gusman’s tenure. By its very nature, a jail is not an easy place to run. Hutson’s mission is to convince voters that she can do a better job than the current officeholder.

Christopher Williams has more than 30 years of law enforcement experience, having served as a deputy under former Sheriff Charles Foti as well as chief of police at Dillard University and the local Veterans Administration. He retired from the VA just days before announcing his candidacy. Williams wants to fight crime and vows to transform the Sheriff’s Office into a “world-class” law enforcement agency. He would also like to dedicate space in the new jail for inmate vocational training to better prepare them for life beyond incarceration.

With so many races and constitutional amendments on the ballot, voters are urged to study their choices carefully before entering the voting booth. A sample ballot is available here. The League of Women Voters New Orleans Voter’s Guide is a good source of information.

Editor’s note: The district vote counts were updated after posting.