By Corinne A. Williams, guest columnist

The pandemic along with the racial reckoning in our country and, most recently, Hurricane Ida have all put New Orleans’ kids in a position to experience a collective trauma — much like people my age experienced after Hurricane Katrina. In addition to traumas already thrust upon them, children attending Lusher Charter School are attuned to many internal school-related traumas. Their school leaders have put their best interests last for one of the simplest things that they have control over: the name of their school.

Lusher Charter School is named for Robert Mills Lusher, a Confederate tax collector, segregationist and unabashed member of the Crescent City White League. By today’s standards and any anti-racist standard, Mr. Lusher would be someone who should be unequivocally rejected as a person to name anything after. He was a white supremacist who wrote that Black children were unworthy of being educated. However, the school’s leadership has taken decades to remove his surname from the program.

In 2005, Lolis Eric Elie wrote an opinion column in The Times-Picayune about the name of this school. In 2017, Lusher student Tamir Bryant started a Change.org petition urging the administration to change the name of this school. And in 2020, in the wake of George Floyd’s murder, a Change.org petition was started by parent Vasy McCoy in addition to an Instagram page that highlights students’ experiences with racism and the need for systemic changes in school policies and culture.

In the Lusher community, there has been overwhelming support to completely distance the school from the name of this person. However, the Advocates for Arts-Based Education Board, the charter board that governs Lusher, has made the process painstakingly difficult in the past year.

In virtual AABE meetings, parents, alumni, teachers and students as young as 10 have spoken out about how deeply offensive and racist this school’s name is. Then came some relief — or so we all thought. The AABE, after a nearly 90-minute closed-door executive session, voted to change the name of the school and set a timeline as to when it should be changed.

Lusher added a renaming page to its website and sent out an email to its community members asking for open input. The email stated:

EVERY VOICE MATTERS
On September 30, 2021, the Advocates for Arts-Based Education Board voted to rename Lusher Charter School and denounce any association with Robert Mills Lusher, a strong proponent of segregation. This is a significant decision in our school’s history, and we need to hear the voices of our faculty, staff, families, students, alumni and community. The Board hopes to decide on a name in November. This is a monumental change for our school, and we need YOU. LET’S HEAR YOUR VOICE!

A follow-up email after the responses were collected via Google Forms stated:

YOUR VOICE MATTERS!
Thank you for the 594 responses submitted using the Name Nomination form. The Renaming Study Group reviewed all nominations and is requesting community input on the short-list options…
The options presented to the Board for consideration will be those thought to best represent the school’s mission, vision and values, not necessarily those with the most votes.

So, out of 594 responses to an online form from the community, how does the shortlist include two options that are still Lusher?

The short blurb under each Lusher-based option says, “The name addresses community concerns about a loss of branding and the anticipated financial impact.” This “concern” was not voiced at any of the public board meetings where a name change was discussed. Where has this concern come from?

And what about community concerns about racism? The entire point of removing the name “Lusher” from the school is about the long-standing culture of racism within the Lusher community. From interpersonal racism in the classroom to deeply systemic racist policy issues in admissions, the dress code and disciplinary procedures, Lusher has a culture of racism that starts at the top.

This summer, Lusher’s CEO was accused of repeated discriminatory behavior. Lusher’s former high school Principal Steven Corbett, now the CEO at Audubon Schools, wrote a  letter asking the AABE to investigate CEO Kathy Riedlinger for alleged discrimination, according to The Times-Picayune / New Orleans Advocate, The 12-page letter detailed racist incidents over a six-month span of Riedlinger’s nearly 40-year tenure. The most disturbing part of the newspaper’s report is how children were intimidated and felt the need to protest and boycott some of their school experiences that were supposed to celebrate them. 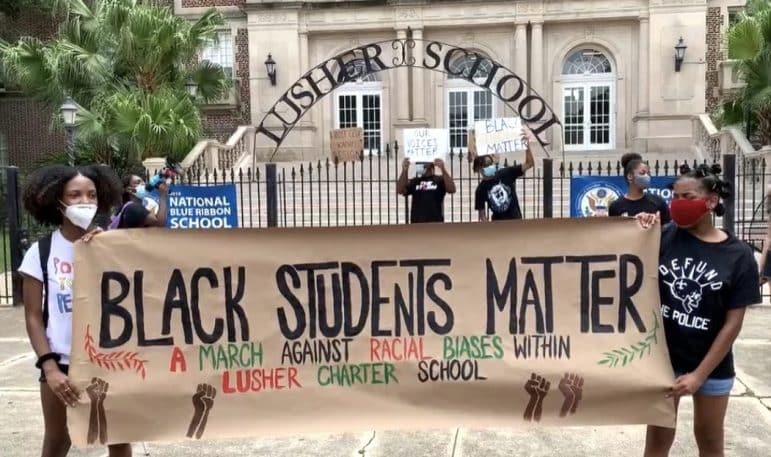 Lusher students protest outside the Willow Street campus in July 2020.

If anything, this name-change saga is a failure by Kathy Reidlinger and the AABE. A potentially easy process has been extremely difficult and clouded by drama by adults who should instead be ensuring the safety of our children in a supportive environment. This failure by the board and the administrators truly speaks to the racist legacy that Lusher has built. It is one thing to reflect on the actual white supremacy that Robert Mills Lusher touted during his time on earth, but his legacy is perpetuated through his namesake institution.

It is time for a complete anti-racist makeover for this institution. As Lusher School has led the area in so many arenas, its leaders have continuously lacked the will to do an internal audit of its culture and policies.

We need to see the AABE act as a leader in diversity, equity and inclusion before the institution solidifies a legacy of racism just as Robert Mills Lusher did in his writing and actions in the Reconstruction Era. They need to show every one of their students that they are all valued, their voices have been heard and change is not only possible — it is necessary.

Lusher alumna Corinne A. Williams was a member of the school’s Class of 2014.