The St. Catherine’s Day Hat Parade will return to Uptown after its 2020 hiatus due to the pandemic. The Catherinettes and other participants will march on Sunday (Nov. 21) gathering at the corner of St. Charles Avenue and Pleasant Street.

Participation in the parade is free and open to women and girls of all ages. Marchers should wear a hat — one they’ve made, or decorated, or pulled from their closet. Men and boys are welcome to join in.

The 2021 grand marshal will be Laura Dinopolis, who won the grand prize for the best hat on Nov. 24, 2019, the last time the march took place. The winner of the hat contest serves as the grand marshal for the following year’s parade.

The theme for this year’s procession is “It’s a Pun-demic!”

“After having cancelled last year’s parade, the decision to go ahead with it this year feels very special,”  said parade co-founder Claudia Lynch, “and we are all looking forward to seeing the Pun-demic themed hats they will come up with.” 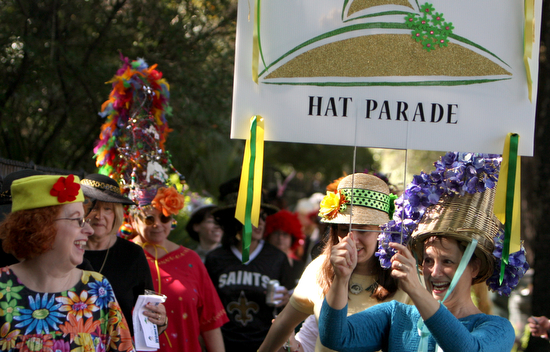 The first Catherinettes parade  travels down St. Charles Avenue in 2010.

The route is less than a mile, and begins at St. Charles Avenue and travels to Washington Avenue, then up Prytania Street and back to the neutral ground at Pleasant Street. Due to the unevenness of sidewalks and unpredictability of animals, no bicycles or pets are allowed in the procession.

This French celebration of St. Catherine (of Alexandria) honors the patron saint of hat-makers and single women. In Paris, milliners and seamstresses from the major fashion houses commemorate the fourth century princess and scholar with the annual Catherinette parade in Paris, showing off elaborate hats of their own design — traditionally using the colors yellow (faith) and green (wisdom).

This festive parade was the inspiration for the New Orleans St. Catherine’s Day Hat Parade.

The parade is always scheduled for the Sunday before Thanksgiving. Marchers gather at at 10 a.m. on St. Charles and Pleasant, and the walking parade begins at 10:30 a.m.