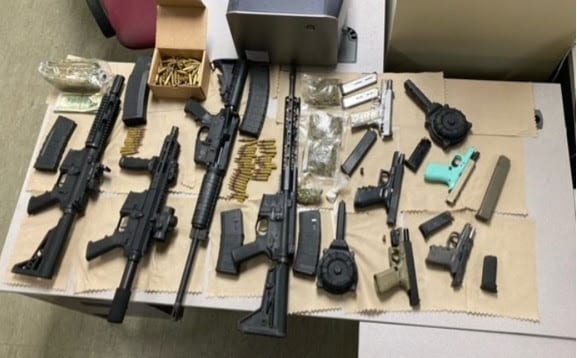 Firearms, including four assault rifles, and narcotics were confiscated during the arrest.

The NOPD’s Homicide Unit and Violent Offenders Warrant Squad arrested Dalton C. Bennett Jr., 22, on Wednesday (Nov. 24) in the investigation of a July homicide and triple shooting in Central City.

During a search of the location where Bennett was apprehended, detectives secured four assault rifles, five handguns, several bags of narcotics and a large amount of cash and ammunition.

Bennett is accused of opening fire at a group of people gathered on Rev. John Raphael Jr. Way and Josephine Street just after 10 p.m. on July 20.

Danyell Fox, 38, was struck by the gunfire that also injured a 34-year-old woman and a 21-year-old man. Fox died from her injuries on July 21.

Sheriff’s Office records for Bennett show one other arrest in New Orleans; he pleaded guilty in 2017 to illegally carrying a firearm and served six months probation.

Anyone with additional information on this incident is asked to contact NOPD Homicide Detective Matthew Riffle at 504-658-5300.