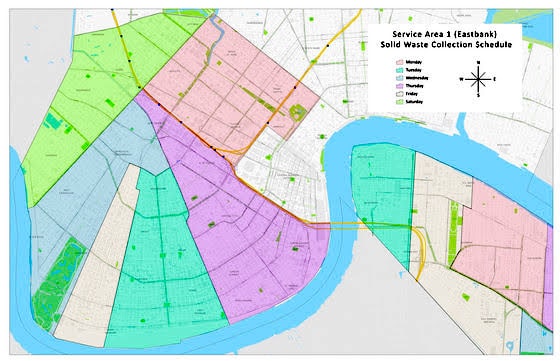 While officials are working to straighten out the city’s trash troubles, garbage will be collected only once a week, the Mayor’s Office announced Saturday (Oct. 9)

The temporary change, which took effect immediately, was implemented “to bring a level of consistency to residents,” a press release stated. “This approach will effectively enable twice the number of trucks to operate in the designated area on each service day.”

The service day for the Lower Garden District, Garden District, Irish Channel, Central City, B.W. Cooper and part of Gert Town (from the Pontchartrain Expressway to Palmetto Street) will be Thursday. This is the purple area on the map above.

In East Riverside, Touro, Milan, Uptown, Freret, Broadmoor and part of West Riverside (to Jefferson Avenue) — the neighborhoods shaded in turquoise — trash will be picked up on Tuesdays.

The area in white from the Mississippi River to Fontainebleau Drive and from Jefferson to Calhoun Street will have a Friday trash day.

The Audubon, University, Black Pearl, East Carrollton and Fontainebleau neighborhoods, in blue, will have a Wednesday pickup day.

The West Carrollton neighborhoods, including Leonidas, Hollygrove and Dixon, will have their garbage picked up on Saturdays. They are shaded in green.

The map of the service days is also available here.

During the once-a-week collection, the hoppers will be grabbing more than just the 95-gallon roll cart. Up to six trash bags and eligible bulky items will be picked up, the press release states, and additional personal trash cans will be emptied.

Residents can put out their recycling cart — filled with household trash. Any recyclable items on the curb will go into the landfill.

City officials have not released information on when the city will again pick up recyclables, stating: “Curbside recycling remains suspended as the city works to stabilize solid waste collections.”

Residents can bring recyclables to the transfer station at 2829 Elysian Fields Ave. every other Saturday from 8 a.m. until 1 p.m. The next drop-off is Oct. 23. See here for more information.

The city has also announced the sanitation fee will be suspended for the month of November and reflected as a credit on the Sewerage & Water Board bill.