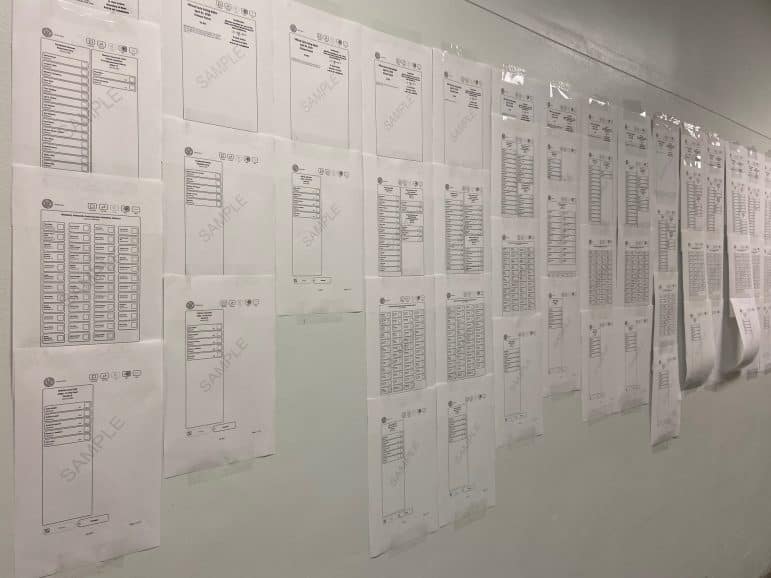 Sample ballots line the hallway outside of the Registrar of Voters in 2020. If ballot measures are too confusing, voters will often skip them.

With the unusual level of apathy that has pervaded this year’s election cycle, supporters of the four constitutional amendments on the ballot are naturally worried that the few citizens who plan on voting will just skip over them. “Voters tend to ignore ballot measures that they know nothing about,” said one consultant yesterday. Still, supporters and opponents of the various initiatives are pushing ahead toward election day, Saturday Nov. 13.

Ballot language can be confusing — and sometimes even misleading. Voters should read and study the amendments carefully.

“I encourage people to read about all of the amendments and visit information sources like the Public Affairs Research Council and the Louisiana Budget Project,” said state Rep. Aimee Adatto Freeman.

Constitutional Amendment 1 would streamline how state and local sales taxes are collected by creating an electronic filing and remittance system. Part of a legislative package of tax bills signed into law in 2017, the amendment has broad support across much of Louisiana.

Mayor LaToya Cantrell has been encouraging New Orleans area voters to defeat the measure because it will take sales tax collections out of the city’s hands. She fears that state government could hold back the redistribution of funds collected on behalf of Orleans Parish. Though New Orleans doesn’t enjoy the level of sales tax our friends in Jefferson Parish generate from malls and big box stores, the city’s budget still is heavily dependent on income from the 4.75% tax.

Good government organizations, like the Louisiana Budget Project, that serve under-represented communities are adamantly opposed to this amendment. LBP Director Jan Moller has said the amendment will cut taxes for wealthy people and corporations, who they already consider not to be paying their fair share. They say it will also make it harder for the state to invest in services such as quality schools, child care and health care.

Constitutional Amendment 3 will allow levee districts created since Jan. 1, 2006, and before Oct. 9, 2021, whose electors approve the amendment to levy an annual tax not to exceed 5 mills for the purpose of constructing and maintaining levees, levee drainage, flood protection and hurricane flood protection.  If passed, the districts will not have to seek further voter approval to raise up to a 4 mill tax.

The Orleans Levee District’s annual tax cap is currently set at 2.5 mills on all taxable property “situated within the alluvial portions of the district subject to overflow.” The amendment clarifies that any levee district created since Jan. 1, 2006, that does not have the authority to asses up to 5 mills but seeks to have the 5 mill option could do so if voters statewide approves the amendment along with citizens who are directly impacted by the tax.  In lay terms, support for this amendment will make it easier for levee districts to put in place improvements they need to make.

Constitutional Amendment 4 would increase the amount that can be redirected from the state’s dedicated funds to the general fund from 5% to 10%. Current law allows the legislature to establish a procedure to determine whether appropriations will exceed the official forecast and an adequate method for adjusting appropriations to eliminate a projected deficit. The proposed change will give state government greater flexibility in forecasting and addressing fluctuations in the state budget.

In lay terms, a vote for this amendment will allow more dedicated funds to be used to fix a state budget gap. A vote against the amendment will keep the cap at 5%.

See here for the Public Affairs Research Council’s guide to the amendments.

“Understanding constitutional amendments are just as important as understanding a candidate’s platform. It’s vital for citizens to really pay close attention to these amendments and the effect they will ultimately have,” said state Rep. Jason Hughes, D-New Orleans.