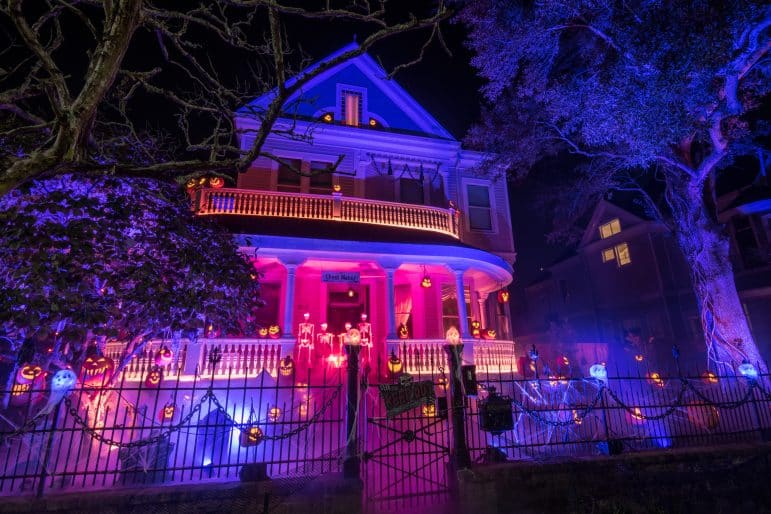 The display at Magazine and Second streets had spooked New Orleanians for the past decade.

Ghost Manor, the animated light show that allows ghosts, ghouls, witches, skeletons and zombies to show off their dancing skills, is back for a limited engagement this year at 2502 Magazine St.

The animated display took a break last year due to Covid and was scheduled for another break this year, but owner David Gentry decided to set the ghosts free for their annual romp.

“The ghoulish denizens of Ghost Manor are taking over once again,” a statement on Facebook reads. “Although the human inhabitants are still dealing with significant damage from Hurricane Ida, the ghosts and ghouls were not content to remain silent this year. We tried. But who wants to argue with ghosts? The singing skeletons were especially insistent.”

Ghost Manor started as a small technical challenge in 2011 and keeps growing in size and inspiration.

At Ghost Manor, ghosts and witches dance to songs like “Thriller” and seem to fly from window to window of the home. Skeletons sing along with the music and 61 jack-o’-lanterns throughout the property light up and keep time with the beat.

The house has become one of the highlights of Halloween, not only for the people in Ghost Manor’s neighborhood but for Halloween lovers all over the New Orleans metro area.

Gentry and his wife, Jessica Douglas Gentry, create the annual display. He enjoys the challenge and rightfully sees the display as an art form. The work isn’t easy — bringing the various scenes to life can take as long as 18 months; Gentry does all of the sequencing by hand.

Although he has some computer science training, he is self-taught in animation, audio-editing and other specialties that give Ghost Manor its magic. It can take up to 10 hours to program the sequences to sync with a single minute of a song. The lighting — which moves with the music and adds another dimension to the experience — can take another 10 to 20 hours.

“It all comes together, and it’s a unified display from top to bottom,” he said. “I use theater techniques and I treat it all as a stage production. It’s not just one single display—there are different scenes and different songs. It all tells a story.” 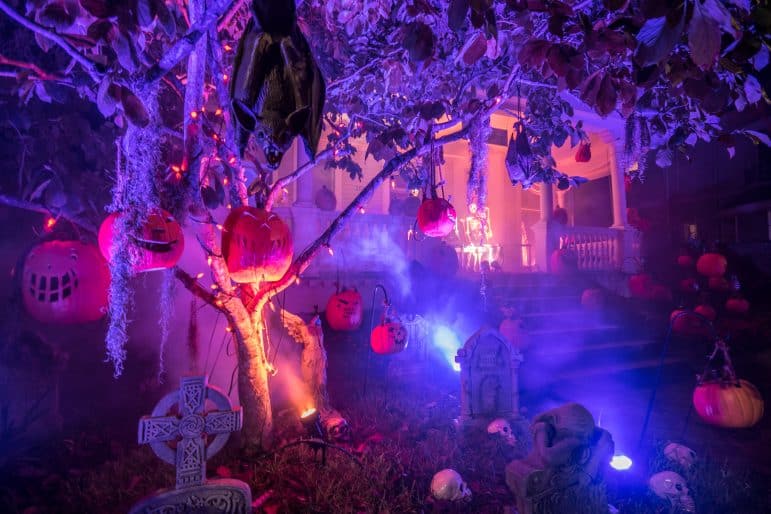 The Ghost Manor animated display is back after its 2020 hiatus.

Gentry and his wife designed Ghost Manor so that the display is more whimsical and magical than scary.

“My idea was that this is what the ghosts do at home once they are done haunting people,” he said. “They like to entertain each other with songs and dancing. They like to have a good time.”

Last year, Ghost Manor took a break to avoid drawing crowds during the pandemic, but Gentry knew that Ghost Manor had to do something to acknowledge the season and everything that was happening in the world.

“Last year, we covered the house in spiders,” he explained. “It was a type of metaphor for feeling cooped up. We had a sign that read, ‘We’ll be back next year after we deal with this spider problem.'”

Gentry’s original plan for 2021 was to bring Ghost Manor back in full force, but Hurricane Ida put a dent in those plans.

“We had windows that were blown out and roof damage from Ida,” he said. “We had water damage, and we figured we would skip it again this year. Then I realized that Ghost Manor needed to happen this year.”

Blame it all on the ghosts that didn’t want to be cooped up another year. Ghost Manor will return for a limited engagement Oct. 22 through 24 and Oct. 29 through 31 from 6:30 pm to around 10 pm, weather permitting.

“If any year is important to do it, it’s this year,” Gentry said. “2021 was difficult in so many ways and the community needs it. We want to show perseverance and optimism. Halloween is good for people because they allow themselves to let their imagination go.”

Gentry hopes that the return of Ghost Manor will bring a little joy back to the season, especially because the last 19 months have been difficult for so many.

“People wanted Ghost Manor to come back; they needed something to enjoy,” he said. “This is a free show that everyone can enjoy. It’s a brief distraction from reality, and I’m excited to be doing it.”