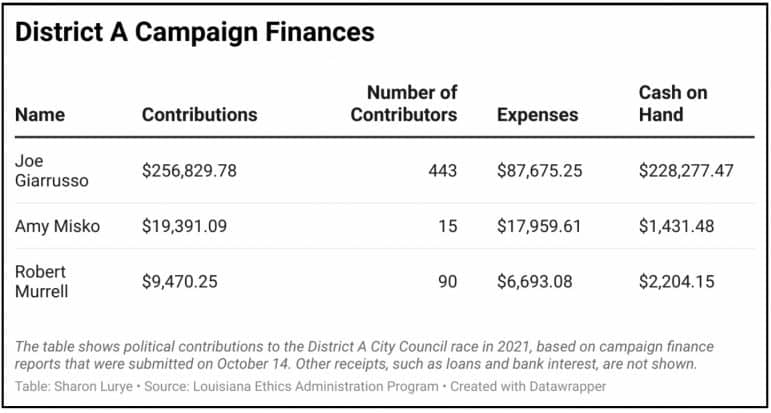 With less than a month to go until the primary election, the three candidates for the District A seat on the City Council have collected more than $285,000 in campaign contributions. Unfortunately for two of those candidates, nearly all of that money has gone to incumbent Joseph Giarrusso III.

The councilman raised almost $260,000 this year for his campaign and still has roughly $230,000 cash on hand, according to the latest finance reports candidates submitted Thursday (Oct. 14) to the Louisiana Ethics Administration Program. And he’s also spent over three times more than his two opponents, Amy Misko and Robert Murrell, combined.

Key contributors to Giarrusso’s campaign include political action committees that represent the real estate and hospitality industries and controversial landfill magnates Jim Ward and Fred Heebe. With the election coming on Nov. 13 — delayed by Hurricane Ida from its original Oct. 9 date — there’s little time for the other two candidates to catch up to him in fundraising.

To find out who’s bankrolling each of the candidates in the District A race, read on.

Overall, he’s received $256,829.78 in campaign contributions from 443 sources in 2021, including $6,250 from PACs and $9,700 in-kind contributions, such as dinners at restaurants that hosted fundraising events. He also received a bit over $800 in loans and bank interest.

Giarrusso’s strongest base of support was in the western side of Uptown that includes the Carrollton area; he received 98 contributions from addresses with a ZIP code of 70118. The Lakeview ZIP code of 70124 came in second with 77 contributions. But he also had some support from outside District A as well as well, including 41 addresses in Metairie.

Giarrusso has received the maximum contribution of $2,500 from 31 donors, while 118 donors gave $200 or less. Political action committees that gave the top-dollar amount include the Louisiana Realtors PAC and the New Orleans Hospitality Coalition PAC.

Another set of top contributors are A.J. Ward Jr. and Frederick R. Heebe, prolific donors to political campaigns and co-owners of the River Birch Landfill, which has been mired in controversy for a decade. Heebe’s wife Jennifer S. Heebe, a former Republican state representative and Jefferson Parish Council member, and Ward’s wife Karen K. Wood also gave $2,500 each.

In addition, Giarrusso, an attorney, received massive support from the law community. Lawyers and law firms that gave $2,500 to his campaign include Kiefer and Kiefer, Liskow & Lewis (Giarrusso’s former firm), Jennifer Neil, Darleene M. Jacobs-Levy and Thomas B. Lemann.

In an interview with Uptown Messenger, Giarrusso said the people who donated the most to his campaign were old family friends or people he has known for decades through his law practice.

“This isn’t like people write checks because of getting something in return,” he said. “It’s because I have long, existing relationships. In a couple of those cases, of lawyers writing checks to me, much of my career has been adverse to them.”

Other notable contributions include $2,380 from Ralph’s on the Park (an in-kind contribution as it hosted a fundraiser), $1998.92 from the Louisiana Restaurant Association, $1,000 from the New Orleans Redevelopment Fund, $500 from the Home Builders Association of New Orleans, $150 from School Board member and former Giarrusso communications director Katherine M. Baudouin, and $125 each from Elizabeth and Carlos Zervigon, also a School Board member.

The candidate hasn’t been hoarding all that cash. This year his campaign has spent $87,675.25, a large chunk of which went to campaign consultants. Since July, for example, he’s paid $13,200 to Holly Friedman for consulting fees.

Other consulting fees since July include $5,000 to the Shultz Network and $5,000 to BDPC LLC. He also gave $10,000 to Fire on the Bayou for campaign filming, $8891.72 to the Printer’s Wholesale Group for campaign signs, stickers and office supplies, and $6,093 to Brown Public Relations.

Amy Misko is a Libertarian and a semi-retired real estate professional living in Lakeview. Her campaign promises include lowering taxes, requiring all budgets to be pre-approved by voters, eliminating the City Planning and Permits departments and dismantling the Sewerage & Water Board.

The long-shot candidate’s campaign finance filing shows she’s received contributions of $19,391.09 — of which $17,351.09 came from her own pocket. The only other major contributions are $448 from an anonymous donor; $500 from the Philip and Leslie Tyessier Family Trust in National City, California; and $500 from engineer Jonathan Brazzell of Sulphur.

Bob Murrell, a software developer who lives in Lakeview and a member of the Democratic Socialists of America, promised in an Uptown Messenger questionnaire: “I won’t be bought by wealthy interests — unlike the incumbent, I refuse campaign contributions from oil and gas, real estate developers, charter schools and owners of city contractors.”

Does Murrell’s campaign finance report show that he lives up to his promises? The majority of his 90 campaign contributors are small donors: 77 gave less than $200, and no one contributed that maximum donation of $2,500.