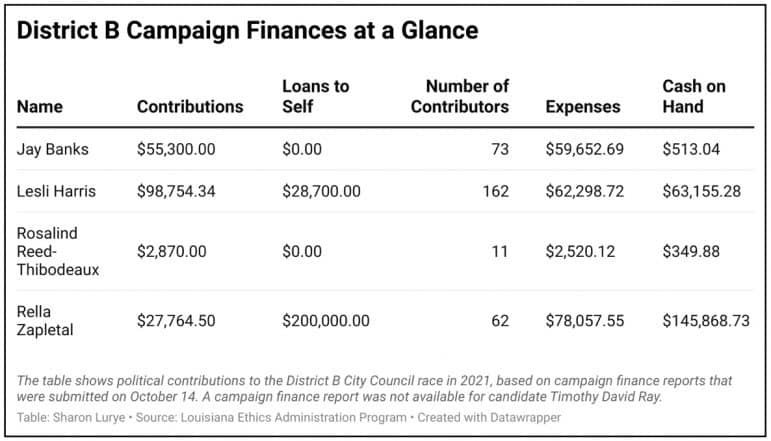 With the primary election for City Council less than a month away, the candidates for the District B seat have spent more than $200,000 battling for a seat, according to the latest campaign finance reports filed with the Louisiana Ethics Administration Program.

But it appears that several candidates have had to reach deep into their own pockets to finance an extra month of spending after election day was pushed from Oct. 9 to Nov. 13 due to Hurricane Ida.

Both incumbent Jay H. Banks and one of his four challengers, Rosalind “Roz” Reed-Thibodaux, have only a few hundred dollars left in cash on hand, while challenger Rella Zapletal, the biggest spender in the race, is relying on a $200,000 loan she made to herself.

Candidates Banks, Lesli Harris, Reed-Thibodaeux and Zapletal have received a total of $184,688.84 in campaign contributions in 2021, with more than half of that amount going to the Harris campaign.

As of Wednesday morning (Oct. 20), the Louisiana Ethics Administration website did not show a campaign finance report for candidate Timothy David Ray, an adjunct professor at the University of New Orleans.

Read on to find out who each candidate’s biggest donors are. 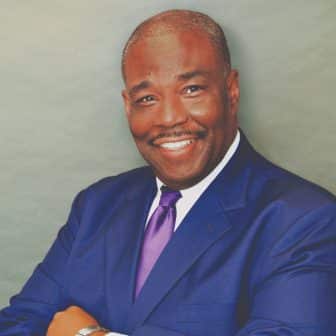 District B Councilman Jay H. Banks won his seat in a 2017 runoff with the slimmest of margins — 128 votes, to be exact. He’s in for a tough battle yet again, as his campaign finance filing shows he had only $513.04 in cash left on hand.

The donors who gave Banks the maximum contribution of $2,500 are:

Another donor who gave $2,500 was Randall Moore, president of ETI Inc., which performs government contracting work. According to news reports and a filing from the federal department of Housing and Urban Development, Randall Moore pleaded guilty in 2005 to taking part in a government kickback scheme in Mayor Marc Morial’s administration and paid a $3,000 fine. At the time Moore defended himself by saying he was the victim of extortion.

ETI Inc. provided janitorial services at Louis Armstrong International Airport, but the Aviation Board voted to end the contract in early 2020, according to a NOLA.com article.

A representative for the Banks campaign said the councilman was not aware of events that occurred 16 years ago and declined to otherwise comment.

Banks has spent almost all the money he’s collected, with $59,652.29 in expenses. Major expenditures include: 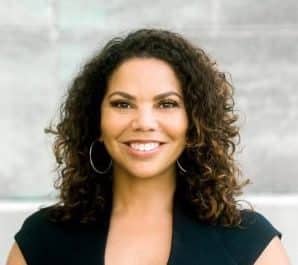 Lesli Harris, an attorney specializing in entertainment and sports law, has represented the Saints and the Pelicans. She is also the former chief of staff to the president of Loyola University.

Harris has taken in more in contributions than all the other candidates combined. So she has a bit more cushioning in her bank account.

Harris’ experience in entertainment law may have won her some friends on Frenchmen Street. She received $2,000 from live music venue Café Negril, and four separate companies tied to Jeffrey Bromberger, owner of Marigny music clubs The Maison and the Dragon’s Den, donated a combined total of $10,000:

Although the contribution limit for a district council race is $2,500 per person per election, Kathleen Allen, administrator of the Louisiana Board of Ethics, told Uptown Messenger that donating via multiple LLCs is allowed as long as they are legitimate businesses and are not all owned 100% by the same person.

“Lesli Harris is a first-time candidate and has received support from family, friends, attorneys and community leaders from across the country,” said Victoria Coulon, a spokesperson for the Harris campaign. “In filing this report, we have complied with all campaign finance rules.”

Other companies that gave $2,500 to Harris’ campaign are:

Couples and individuals who gave $2,500 are: 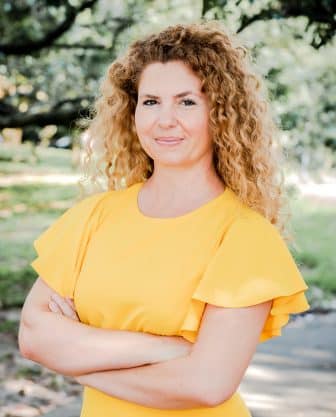 She also got some love from a few Carnival organizations, getting $300 from the NOLA Nyxettes dance troupe and $200 from the Krewe of Pandora, an all-female krewe that parades in Jefferson Parish.

The only non-Democrat in the race, Reed-Thibodeaux is running as an Independent. 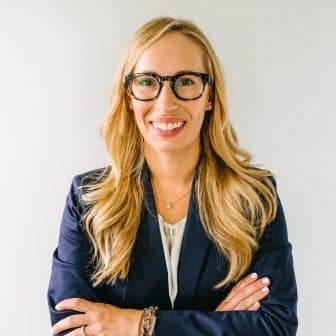 One major focus of her campaign has been taking on Entergy: she has promised that if elected she would introduce an ordinance to require an annual independent audit of the utility’s profits, and one of her latest campaign mailings attacked the incumbent as a “machine politician” who “refused to hold Entergy accountable” for power outages.

According to her campaign finance report, Zapletal had only four donors who gave the top amount of $2,500:

Other notable contributions include $1,000 from the Louisiana Realtors PAC and $1,500 from business and banking consultant Ann C. Middleton.

In addition, she’s paid $5,023.76 to Printers Wholesale Group for yard signs, $4,700 to Milman Research and Consulting for campaign research, $3,630 to Winston Bergeron LLP for legal services, and $3,244 to the postal service for mailers.