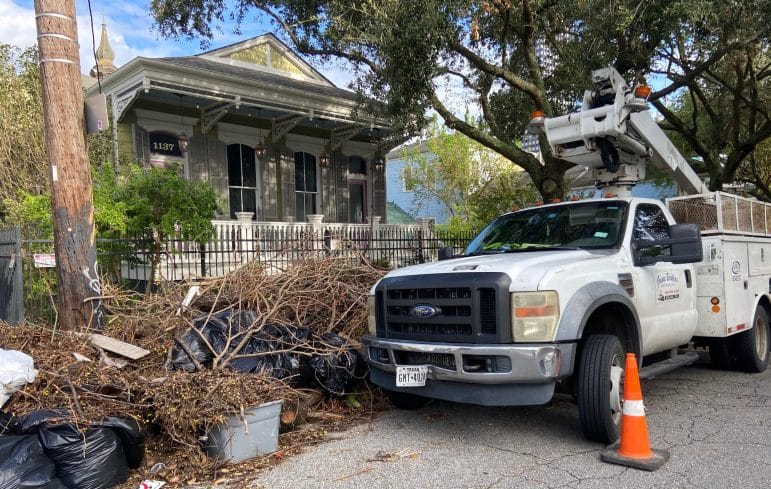 Lines are repaired on Thursday (Sept. 16) in Central City amid piles of debris.

The Big Easy ain’t so easy no more. Across the board, almost all of today’s citizens are paying for 150 years of benign neglect during which those who had money led a “laissez les bon temps rouler” lifestyle while many others struggled just to get by.

What’s gotten under my skin? Evacuating during Hurricane Ida to a town where potholes are at a minimum; no one is looting, panhandling or carjacking; and residents are not automatically carrying concealed weapons for personal protection.

I stood in a long line at Walgreens on St. Charles Avenue yesterday to fill a prescription and listened to local residents complain about the piles of garbage and debris in front of their homes while also claiming much of the Garden District and St. Charles has been cleared. I heard them label Sidney Torres IV as a “money grabber” because his firm stepped up to assist with garbage collection. I heard folk grudgingly compare how long it took for them to get their electricity and internet restored. Everybody’s got an Ida story to tell.

Some were discussing the upcoming municipal elections and saying Mayor LaToya Cantrell deserves re-election because of the great job she’s done during the pandemic. Others, entirely stressed out by Ida, weren’t so sure.

Many of New Orleans’ major problems — including a crumbling infrastructure, climate change and an unstable electrical transmission system — must be linked to political leaders who lacked either the vision or the backbone to plan for the city’s long-term future. The pipes and the transmission towers didn’t rust overnight.

I personally cleared the path to my street drain to ensure the water could get there. How many hundreds of catch basins were never cleaned out in advance of hurricane season? I placed dozens of sandbags in front of my building to keep the water out; unfortunately, it enters far too often.

A perpetually underperforming public education system, severe lack of affordable housing, continuous food insecurity and a plantation-style economy that failed to keep up with the need for diversification are — to a great degree — the result of the ever-widening gap between the haves and the have-nots.

Hurricane Ida taught us what wind can do to transformers, power lines, trees and roofs. It taught us that relying on any single means to generate electricity for New Orleans — basically an island in the Gulf — can lead to hardship. Hurricane Katrina and almost every major storm, and even mere rainfall, since then put the fear of flooding in us. And yet, change is too slow.

Once evictions begin again, New Orleans’ perpetual lack of affordable housing will be in the spotlight. Disaster food stamps are a great stop-gap measure but won’t last forever. Better-paying jobs are available, if workers have the training needed. Our public school system basically failed students last year. This school year didn’t get off to a great start either. How will our kids ever catch up?

When will we have more recreational and mentoring programs to help guide juveniles away from a life of crime?  After a long hot summer of robberies, carjackings and vehicle break-ins, looting suddenly became an issue. A savvy business owner can hopefully spot a shoplifter but catching looters is an entirely different matter.

Despite my pessimism, all I have to do is click on to Nextdoor to find fellow New Orleanians who are thankful, appreciative and even optimistic. “While the culture, cuisine, architecture are wonderful, what makes our city special is the people. While I hope to never experience a ‘panduricane’ again, I can say, there is no better community to take on a natural disaster with than this one,” wrote John Brissette from the Upper Rickerville neighborhood.

David Moreau in the Black Pearl said his neighbors on Dominican Street are phenomenal.  Kate Argote of Central Carrollton gave a shout-out to a neighbor she had never met before who helped her cut up a small fallen tree. Kim Barnett from the Garden District said, “You are never alone in New Orleans.”

Freret’s Kaija Reiss even expressed her admiration for the trash collectors who “work in the extreme heat lifting our heavy stinking garbage. Next time you see them working pause and take a look. They are incredible.”

Perhaps the best reflection are the historic words of the 19th century writer Lafcadio Hearn — great, great uncle of Irish Channel resident Martin Hearne — who once said of New Orleans: “Times are not good here. The City is crumbling into ashes. It has been buried under taxes and frauds and ‘maladministrations’ so that it has become a study for archeologists … but it is better to live here in sackcloth and ashes than to own the whole state of Ohio.”

How many more hurricanes or disasters, natural and otherwise, will it take before New Orleans gets its education system right, diversifies the economy beyond tourism, fixes the infrastructure and adequately plans for climate change? Ida is causing more people to reflect on whether living in the Big Easy is still worth all of the trials and tribulations. Let’s all work to make the changes needed before the rest of the tax base floats away into the Gulf. 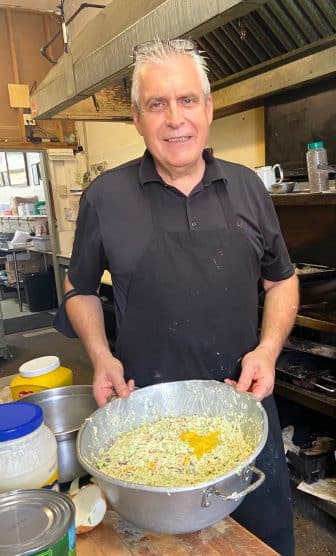 Thousands of New Orleanians have stepped up to help their neighbors since Hurricane Ida decimated the region, especially lower Jefferson, Plaquemines, Lafourche and Terrebone parishes. On Saturday, a contingent from New Orleans’ Greek-American community will be preparing 1,000 hot meals in Raceland for law enforcement personnel and crews involved in the cleanup and recovery. Led by restaurant owner Pete Patselikos and funded by the Galatoire Foundation, the team is standing in solidarity and support for those working to speed the recovery.

5 thoughts on “Viewpoint: Hurricane Ida exposes what it means to live in New Orleans”