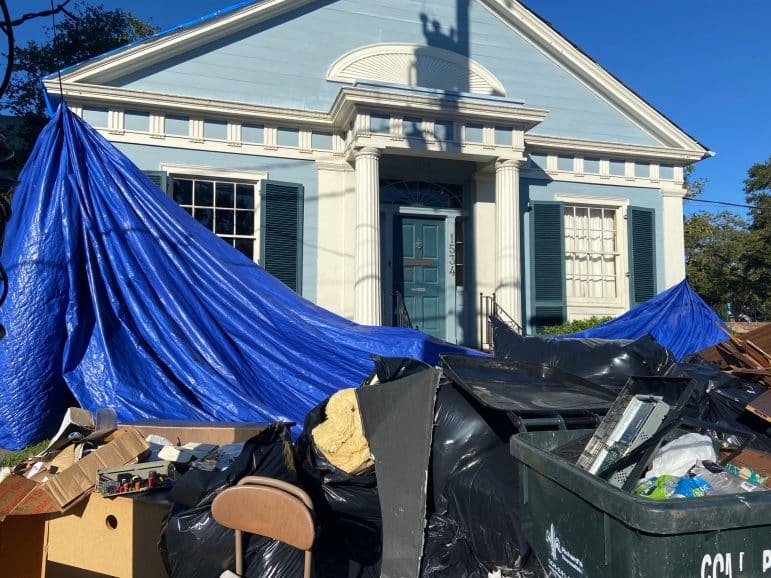 Tarps are being installed at the dental office of Jonah Moore at 1534 Aline St. A generator is also in use to dry out the building.

Many members of the legal community are aggressively marketing their services in the wake of Hurricane Ida to assist businesses or homeowners and renters with getting the money they deserve from insurance companies. After all, most of us pay thousands of dollars annually for coverage and should be compensated whenever legitimate claim arise.

Not so fast, say other lawyers. At least two local attorneys, Megan Kiefer and Sal Brocato, are advising that citizens retain lawyers only if they feel their insurance carrier is not operating in good faith. “It’s premature to hire a lawyer right now,” Kiefer said. “Most insurance claims are not at that point yet.”

Kiefer and Brocato say they don’t want to take money from citizens who have relatively simple claims they can settle on their own. If you hire a lawyer too early, the lawyer’s fee will cut into your ability to make all the repairs with the funds provided.

Brocato estimated that perhaps 500,000 insurance claims will be filed as a result of Hurricane Ida winds, flooding and other storm damage. “The trajectory of the storm was very odd. For the most part, it really wasn’t a water event in metro New Orleans,” he said.

Even before Ida heavily flooded the Northeast, the Consumer Federation of America estimated that the federal flood program would handle as many as 100,000 claims totaling more than $7 billion, according to The New York Times.

After a claim is made, carriers have 30 days to initiate an adjustment. If carriers do not perform during that time period, that’s the first reason someone would need a lawyer. If a client is able to come to an agreement with their insurance carrier and the carrier does not subsequently present a check during the required timeline — that’s the second reason to retain a lawyer.

“If the insurance carrier denies the claim in full or in part due to some policy language exclusion, then a lawyer can come in and analyze the policy to determine if the denial is valid,” said Kiefer. In most cases, people open a claim and the insurance company , investigates the loss and recommends a payment. If the payment amount is undisputed, the client should accept it, she said.

“You should not sign a release, and then at that point you should contact a lawyer to see if more money is available. That way a lawyer isn’t taking a fee on the amount the insurance company was already going to give you — just an amount you couldn’t get on your own. Most people don’t realize that just because the insurance company determines you should get ‘X’ doesn’t mean that the end of the road. You can accept ‘X’ and still get a lawyer to fight for more,” Kiefer said.

In essence, the property owner is self-insured for the amount of the deductible and can only collect for costs beyond the deductible amount. That amount is set higher for named storms, like Hurricane Ida.

For large, complicated claims, the role of the lawyer is to help get clients the most money possible. “Insurance companies are not always going to intentionally try to underpay customers. But it’s going to happen here. Companies are overwhelmed. They need to get checks out. They need supporting information quickly,” Brocato said. “Sometimes insurance companies are not a good neighbor. They are only looking for a resolution and for the property owner to sign a release.”

Kiefer recommends that property owners hire their own contractor to prepare a damage estimate and check prices of materials and services. Request a re-inspection whenever your contractor’s estimate does not line up with the adjustor’s recommendation.

“It’s a symbiotic relationship. Insurance companies have a duty to pay legitimate costs — minus the deductible — to restore the property to its prestorm conditions. This is what you pay insurance premiums for,” Brocato said. “If the insurance company misapplies part of the policy or comes up with other exclusions, that’s a whole different matter. Everyone has unique issues. Know what your issues are. Understand your policy. If you are still unhappy at that point, call a lawyer to help get you more money.”

Consumers can expect insurance premiums to rise next year by approximately 5% to 6%, according to Louisiana Insurance Commissioner Jim Donelon. Those increases are not directly attributable to Hurricane Ida. In fact, making a storm claim will not cause a policy to increase. Rather it’s a reflection of rising costs by carriers who are always striving to make a profit.

In some cases, financial assistance for rebuilding is available through FEMA, especially if someone is uninsured or underinsured. But if you have insurance, FEMA requires that you file a claim with your insurance carrier first. Blue tarps are being installed for free on houses with roof damage. Low-interest loans from the Small Business Administration are also available.

Recent media attention has been focused on the maggot-infested trash and debris on New Orleans streets and on Entergy’s flirtation with a possible exit from oversight by the City Council. So it might be easy to forget that 99 Louisiana residents still died from Covid-19 on Tuesday alone, bringing the state’s total death count to 13,657, according to the Louisiana Department of Health.

About 53% of the dead were male and 62% were white. They had a median age of 74 and probably also suffered from hypertension, diabetes or cardiac problems.

With the start of fall and that bit of cooler air we are experiencing this week, some of us might be wondering if it’s OK to let our guard down. It’s not. Covid-19 is not seasonal like the flu, and only 44% of Louisiana residents are fully vaccinated. Slightly more than 2 million Louisiana residents have received the vaccine; 4.3 million total doses have been given.

That leaves an additional 2 million-plus still hanging out there unprotected. It’s mostly those unprotected folk who are filling up the hospital beds, although breakthrough cases are still occurring.

Between our large rate of unvaccinated residents and the number of potentially unvaccinated leisure visitors who – festivals or no festivals – will be streaming in for Saints games, Halloween, Thanksgiving, Christmas, New Year’s Eve, the Sugar Bowl and Mardi Gras, New Orleanians are still going to be vulnerable.

Slightly fewer than 2,000 new cases were reported Tuesday in Louisiana with 1,221 people in the hospital and 225 on ventilators. The numbers are trending downward here and in other parts of the South but trending upward along the coasts. Though many health care professionals are somewhat optimistic that the Delta variant is fading away, there is no way to know whether a more transmissible new variant isn’t lurking right around the corner. Increased rapid testing might slow down the spread.

Last year, the worst surge hit midwinter. Another winter Covid surge in Louisiana could be preventable if more people were willing to get the shots. Yet, there is still significant vaccine skepticism in our state. National experts say that the pandemic won’t be under control until 85% to 90% of the U.S. population is vaccinated. That means all of the adults, all of the adolescents and a large number of young kids. We still have a long way to go.

Until then, wear a mask and stay healthy.

Editor’s note: An earlier version of this column misquotes Megan Kiefer on whether to sign a release. Policyholders should not sign a release until they believe the terms are accurate and fair.