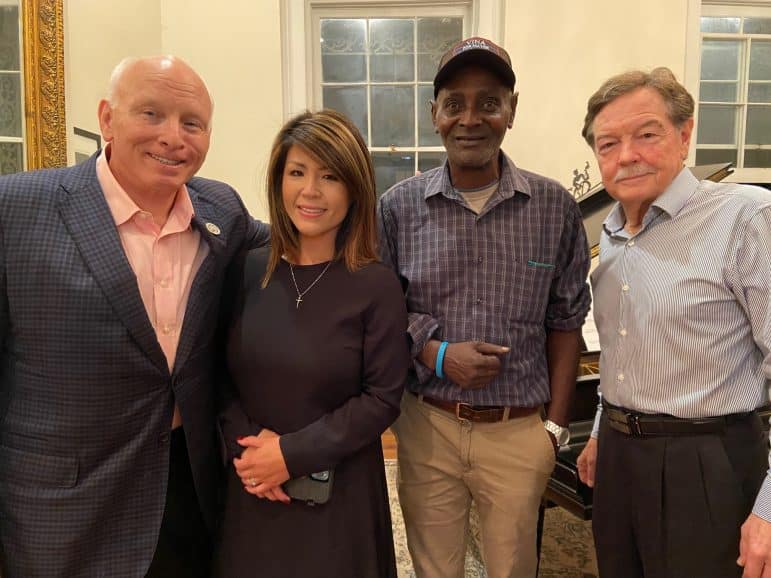 Republican mayoral candidate Vina Nguyen was excited for the opportunity to address a group of supporters Wednesday night (Sept. 29) at a fundraiser in the French Quarter. “I promise to be a different leader — one who comes from a long road of obstacles that has taught me to be kind to others and listen to their concerns,” Nguyen told the packed crowd that included Republican State Party Chairman Louis Gurvich, entrepreneur Gregory Holt, Council District C candidate Stephen Mosgrove, and Juliet and Tim Laughlin, who hosted the event. “We can’t treat our citizens the way this mayor does, and I promise we will do better. We should show businesses looking to continue commerce here, or locate here for the first time, that the past four years of indecency are over. The sun will rise again on our great city.”

A small-business owner, Nguyen has developed a finely tuned platform that focuses on crime and infrastructure. “Together we must build a safer, stronger and better New Orleans,” she said. Without significant resources and paid media, many potential voters may never get an opportunity to hear Nguyen’s platform. That’s why events like Wednesday night’s fundraiser are so important.

One of 14 candidates who qualified to run for mayor, Nguyen and her fellow non-incumbents are struggling to raise money and get their messages out at a time when media attention continues to be focused almost exclusively on current office holders. While some challengers were visible before the storm, Hurricane Ida changed the trajectory of the races.

It has also put a damper on most fundraising. With the election just six weeks away, the challengers — especially those in the race for mayor — are locked in a battle to raise what few dollars are still out there and gain visibility in whatever way possible. “Our campaign recognizes the unfair amount of free media the incumbent has received during this election,” proclaimed Nguyen, who recently organized several days of trash pick-up in Lakeview.

“The campaigns seem to be in suspended animation. They seem to be running in place,” said University of New Orleans political scientist Edward Chervenak, director of UNO’s Survey Research Center. “Opponents to the incumbents don’t seem to be able to get any traction.”

While most citizens are still assessing damages from the storm, Chervenak said he believes New Orleans will get back to normal relatively quickly.  He also believes that as the post-Ida era continues, citizens could become angrier regarding the city’s failure to deliver essential services. Though he hasn’t seen any current research, Chervenak suspects that voter support for Cantrell, who has enjoyed high approval ratings, could have decreased due to the recent “sanitation pick-up disaster.”

At least one mayoral challenger, Belden Batiste, has chided elected officials for continually receiving media attention by distributing water, food and tarps to impacted citizens – supplies that may have been donated by aid groups and others rather than paid for by the politicians passing them out.

He advocates that elected officials should “keep it real” by doing the necessary work instead of always campaigning and posing for photographs. “People have been playing a lot of games,” said Batiste. Several mayoral candidates are “working for the same goal of getting rid of Mayor Cantrell” and will be taking the highly unusual step of canvassing together in the coming weeks, Batiste claims.

Chervenak considers distribution of hurricane supplies to be simply a part of an elected official’s responsibilities. “They are out in the community serving their constituents. They are doing their job,” he said. The media is naturally drawn to publicize incumbents’ activities because they are better known, he said.

Until 1987, the Federal Communications Commission had a fairness doctrine in placing — requiring balanced news coverage of controversial ideas and equal time for opposing candidates. Many challengers wish the mainstream media would still embrace the concept as a good faith measure.

Other challengers’ concerns about the races vary. Mayoral candidate Leilani Heno said she has been waiting for someone to call out this year’s candidate forum process. Although Mayor Cantrell has not been present at many forums, she has received almost every endorsement.

“The existing mayor blatantly disrespects the forums by not showing up, and yet they still endorse her,” Heno said. “Some of the people on the committees tell me behind the scenes that they feel like the organization ‘has to support’ the incumbent. When I ask about supporting the city, they just shrug their shoulders.” Heno said one group was more interested in who was donating to her campaign and how much — and less interested in her policy positions.

Council District B candidate Roz Thibodeaux also was critical of the preference endorsing groups give to candidates with the most funding. “Organizations support whoever has the money, not who has the plan,” said Thibodeaux. She said leaders in one group told her she was their preferred candidate but added: “You will never get the money you need to win, so for that reason we cannot support you.”

“The donor class in New Orleans see political donations more as investments than donations; they are hedging their bets in favor of the incumbents like Mayor Cantrell. Few business owners can afford to go against her,” said Matthew Hill, an Independent making his second run for mayor. “The political machine has shaken down the citizens so bad that no one knows where to turn to next. You have a situation where citizens want massive change but don’t know who their torch bearer will be.”

Council at-large candidate JP Morrell has a different take. He views this moment as an advantage for those “challenging the broken system” and the people who perpetuated it. “Free earned media isn’t helpful if it’s just reminding voters that all the problems we now face were foreseeable and preventable,” Morrell said.

“We know so many things haven’t been working for years — from trash pick-up to unfinished street construction to spiraling housing costs,” Morrell added. “People can see now we need a new direction, a better way and a new urgency to get things done.”

None of the non-incumbent challengers in the race for mayor and other municipal offices will be able to raise as much money or garner the free media attention that is generally available to incumbents. Yet, the challengers push ahead toward election day.

More candidate forums are being scheduled in the coming weeks by the Urban League of Louisiana (Oct. 5-7), the Broadmoor Improvement Association (Oct. 6), and other organizations.  Check them out to learn more about all the candidates running in our Nov. 13 primary elections. Early voting will take place Oct. 30 through Nov. 6. Mail-in ballots are currently available.