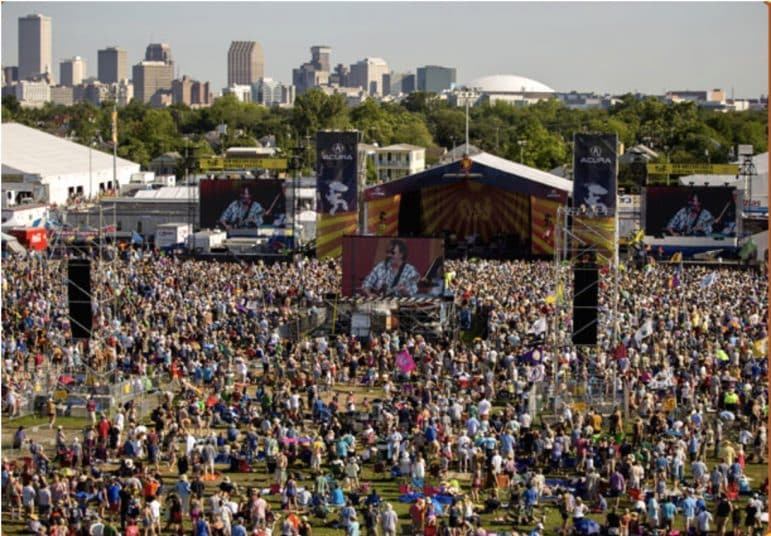 The Delta variant is quickly overtaking America. It already accounts for 93% of Covid-19 infections. To combat it, government and the private sector are announcing new mandates almost daily. Anyone planning to pay $200 or more to see the Rolling Stones at Jazz Fest in October must surely be wondering if a vaccination card or a recent negative Covid-test will be required for admission. Without such precautions, the Jazz and Heritage Festival, French Quarter Festival, Saints games and other fall special events could become superspreaders unlike any seen before.

Jazz Fest producer Quint Davis has always said the Fest will adhere to the prevailing Covid guidelines. Mayor LaToya Cantrell hasn’t announced a decision about fall festivals. No word about any special requirements for the upcoming Saints season either. Yet, if the percentage of vaccinated Americans and Louisianians doesn’t vastly improve, it’s hard to believe that extraordinary measures won’t be put in place during our much-needed fall football and festival season.

Already Tip’s, the Maple Leaf and d.b.a are requiring vaccinations certificates. By doing so, they can reduce (but probably not eliminate) their number of Covid-positive customers — which could keep the clubs operating and earning money for employees and owners. Will other clubs, museums, indoor stadiums, concert halls or even hotels be far behind?

What’s all the fuss about? Just call me a naysayer. Covid-19 and all the viruses to follow are changing our lives forever – not just in New Orleans but around the world.  Mask-wearing could become of permanent feature of everyday life in America, as it already is in some Asian countries. Hand sanitizer may become as essential as lipstick. Hand-shaking could go by the wayside forever.

Health officials claim the Delta variant should dissipate by the end of October, but there is already another variant, Delta Plus, making headway. First identified in Europe or India, it is traveling to other countries including South Korea, the United Kingdom and the United States. This newest variant is thought to spread more easily and bind more easily to lung cells. It’s never too early to order more ventilators.

Sure, there will be booster shots available by year’s end for Americans and most Europeans. But what about the millions of people in Asia, South America and Africa who are crying out for the vaccine but can’t get even the first shot. Those folks will continue to get sick and die; new variants will spring up like nasty weeds and will eventually find their way to our community. Until richer countries take care of poorer countries, Delta and its descendants will continue to bring death and destruction to our planet.

Unfortunately for us all, Louisiana remains at the top of the infection rate and unvaccinated citizens. The state’s hospitals are running out of beds; desperate calls have been put out for more medical professionals to help. Yet too many Louisiana residents still have nonsensical excuses as to why they won’t get the shot:  “I’m young and healthy. I don’t know what’s in it. It might make me sicker than if I got Covid.”

The Kaiser Family Foundation released a study this week that basically said that the people most likely not to get the vaccination are 49 or younger, White, registered as Republicans, only attended high school, earn less than $40,000 per year, and live in the suburbs.  Seventy-one percent of women reported they had had at least one shot, compared with 63% of men. More men than women say they will definitely not get the vaccine.

Getting vaccinated really isn’t that difficult. It’s free and basically available anywhere. Already 65% of New Orleans adults are fully vaccinated, though there are neighborhoods where resistance is strong. Children under 12 are still not eligible, but they – and teenagers – are ending up in hospitals much more frequently with the Delta variant.  Children and teens now represent 19% of reported cases.

Mayor Cantrell already mandated that the city’s 4,000 employees get vaccinated. The RTA has created a similar rule as did Sheriff Marlin Gusman earlier this year.  Many but not every employee at companies like McDonald’s, Home Depot, Dunkin Donuts, Kohl’s, Sams, Walmart and Target are getting vaccinated. After all, it’s good for business.

Vaccinations or monthly testing are also becoming the order of the day at LSU, Dillard, Loyola, Tulane, Xavier and the city’s charter schools. In colleges where it is not mandated — like UNO, SUNO and Delgado — it is highly recommended.

The state health department says Orleans Parish has a high level of community transmission. City data shows a dangerous number of new cases — a seven-day average of 312 per day — have been reported. This week more COVID patients than ever before filled Louisiana’s hospitals.

The Delta variant has changed everything. Don’t become its victim. Get your family and friends vaccinated, social distance, avoid big crowds. As Gov. John Bel Edwards says: “The life you save might be your own.”

“If you are unvaccinated, you are much more likely to one, get Covid-19; two, get hospitalized; and three, die if you get it. This is a tragedy,” said President Joe Biden this week.

4 thoughts on “Viewpoint: Will proof of vaccination be required for festivals and Saints games?”