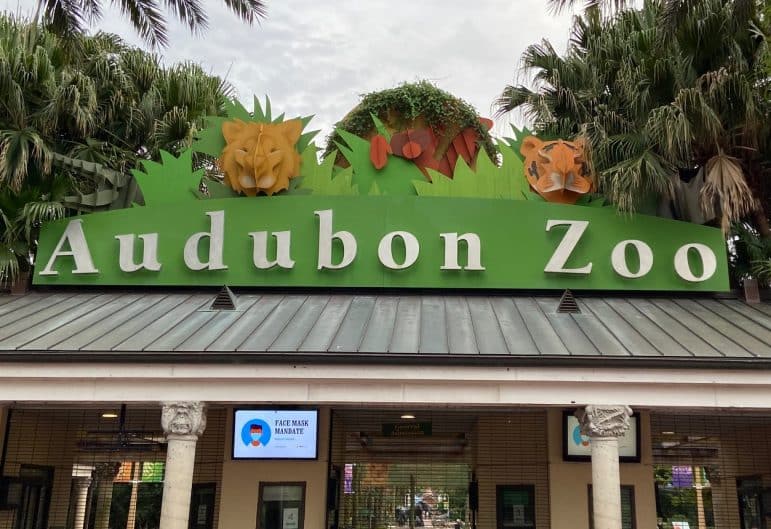 Signs announcing a mask mandate greet visitors to the Audubon Zoo. No zoo residents have been diagnosed with COVID-19, and the zoo is working to keep it that way.

I’ve been waiting for a savvy organization like the Audubon Zoo to announce plans to vaccinate vulnerable animals against COVID-19. Since the virus might have started in wild animals and was later transmitted to humans, it makes good sense that the zoo’s four-legged residents — and even our family pets — could catch the virus.

Mike VII, LSU’s live tiger mascot, is probably the best-known animal in Louisiana to be vaccinated against COVID-19. He got his second dose earlier this week and will again be available for close-up visits later this month.

Mike’s vaccine was donated by the drug manufacturer Zoetis, which is also providing more than 11,000 vaccine doses for mammalian species residing at the Audubon Zoo and dozens of other conservatories, sanctuaries, zoos and academic institutions around the country. Audubon will use their doses to inoculate at-risk animals including apes, big cats, and such mustelids as ferrets, according to WWL-TV.

Most of us don’t have an ape or big cat at home to protect, but we do have domestic pets.

The federal Center for Disease Control and Prevention reports “a small number of pets worldwide, including cats and dogs, have been reported to be infected with the virus that causes COVID-19, mostly after close contact with people with COVID-19.” In an informational bulletin on pets and COVID-19, the Mayo Clinic explains that the virus can spread from people to animals.

With the Delta variant causing a tremendous number of new cases, including among thousands of young children, it may be time for families — especially those with unvaccinated members — to pay closer attention to their furry companions’ health.

Does your companion animal have a fever, coughing, difficulty breathing or shortness of breath, lethargy, sneezing, runny nose, eye discharge, vomiting or diarrhea?  These are all signs that your four-legged family member might be sick with the COVID-19 virus.

Just last month, Scientific American reported that two new unpublished studies show that dogs and cats with COVID-positive owners frequently have SARS-CoV-2 antibodies, indicating that they had been infected with the virus at some point.  “Dogs or cats that live in a household with people who have COVID often become infected and sick themselves,” the report states. Though symptoms are usually mild, occasionally the pet’s infection can be severe.

In one Canadian study the risk of infection in cats was higher in those that were closely cuddled by their owners. This cuddling correlation was not observed in dogs. Texas A&M veterinary epidemiologist Dr. Sarah Hamer said that, given the closeness of person-pet relationships, “it’s just not that hard for those animals (dogs and cats) to get infected.” Hamer also said she believes that cats become infected at higher rates than dogs and pass the disease on to fellow felines. 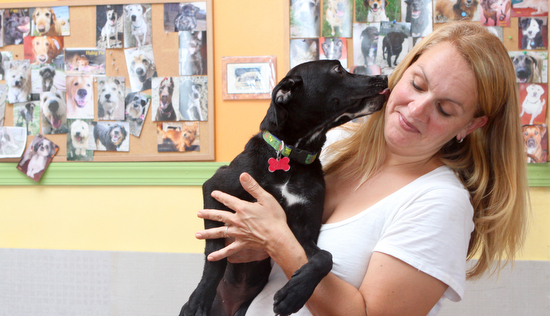 The risk of animals spreading the coronavirus to humans is low, but humans diagnosed with COVID-19 should avoid close contact with pets while contagious.

According to the CDC, “We are still learning how they (pets) are affected by the virus.” The risk of animals spreading the virus to people is considered low, based on available information to date. Netherlands research veterinarian Dr. Els Broens concurred: “There is no evidence of re-transmission from dogs and cats back into humans.”

If a person inside the household becomes sick, isolate that person from everyone else, including pets and other animals, the CDC recommends. In other words, if you are sick with the Delta variant, don’t allow your dog or cat to kiss or lick you or share food or bedding.  There seems to be little indication that birds catch the virus.

The CDC advises pet owners not to put masks on their animals because they might harm the pet. Pet owners also should keep their four-legged children away from unvaccinated people outside the household if possible, the CDC states.

A stranger thinks your doggie is cute and wants permission to pet him or her? I don’t think so.  Your friend from work invites you and your pet to a doggie meet-up? Not this month. A neighbor says you all should walk your pets together.  Wait until the Delta variant subsides.

People who regularly take long walk with their dogs or frequent dog parks might want to temporarily change that practice. Limit walks to bathroom breaks and stay close to home. Keep your dog on a leash and away from other people. The CDC also recommends that cats should be kept inside and that gloves be worn whenever cleaning up after pets. Pet waste should be sealed in a separate bag.

Though an important amenity for many working pet owners, doggie day care is another place where an unvaccinated pet parent or asymptomatic pet could pass the virus around.

“There is no evidence that the virus can spread to people from the skin, fur or hair of pets,” the CDC states on its website. “Do not wipe or bathe your pet with chemical disinfectants, alcohol, hydrogen peroxide or other products such as hand sanitizer, counter-cleaning wipes or other industrial or surface cleaners.”

Most — but not all — pets who have gotten COVID-19 can be treated at home. Your pet might need to be isolated in a separate room and cared for by someone who has been vaccinated.

Mayo Clinic’s infectious disease specialist Dr. William Marshall III warns that if a person is sick with COVID-19 and his or her pet becomes ill, don’t take the animal to the veterinary clinic. Instead notify the vet by telephone and determine if a telemedicine consultation or another treatment plan is possible. “Testing is only recommended for pets that have symptoms and have been exposed to a person with COVID-19,” Marshall said.

Probably contracted from a zookeeper, lions and tigers at the Bronx Zoo were diagnosed last year with the SARS-CoV-2 virus that causes COVID-19 in humans. The San Diego Zoo Safari Park reported a break-out of COVID among gorillas in January. Last month two of San Diego’s rare snow leopards also became ill.

Zoetis’ COVID-19 vaccine has been authorized for experimental use only by the U.S. Department of Agriculture.  It has already been distributed to the Oakland Zoo, where vaccinations were given to tigers, black bears, grizzly bears, mountain lions, chimpanzees, fruit bats and pigs.  The Zoetis vaccine is not intended for humans and will not affect the number of doses available for the public.

By no means will Delta be the last COVID-19 variant. Perhaps a vaccine that will protect house pets and other animals will soon become widely available in the U.S. Vaccinations for Russian dogs and cats began in March, 2021 utilizing a home-grown vaccine called Carnivac-Cov.  Trials showed the vaccine also generated antibodies in foxes and mink.

Dr. Nancy Welborn, a professor with the LSU School of Veterinary Medicine, told WWL-TV on Tuesday that the ultimate goal of vaccinating animals and people is the same.: “Try to build up that immunity to help prevent the virus from actually causing infection.” A worthy goal, indeed, for people and pets.