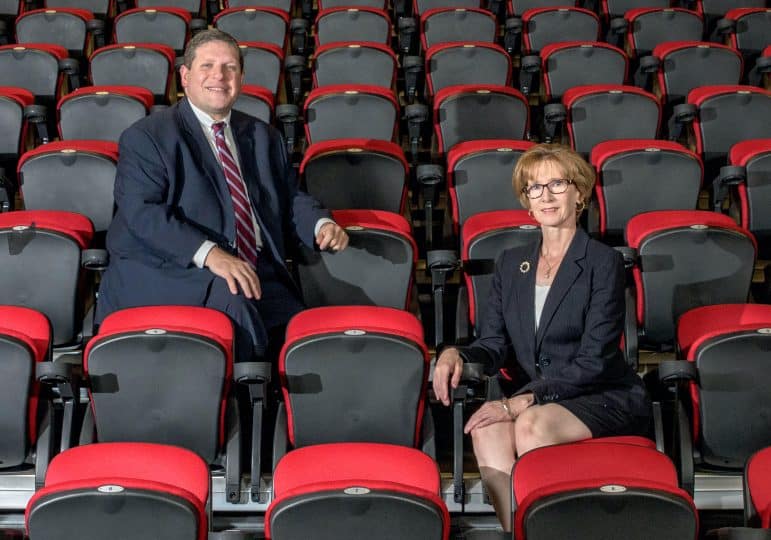 Dominic Massa and Robin Cooper at the performance studio in the WYES headquarters on Aug. 18.

With the recent retirement of WYES president Allan Pizzato, two native New Orleanians who are driven to broadcast excellence, Robin Cooper and Dominic Massa, have taken the helm to bring new ideas to the Crescent City’s iconic public television station.

Leading the station since 2013, Pizzato oversaw the station’s tricentennial coverage, the creation of new shows and documentaries, and the construction of the $17 million headquarters that opened in 2017.

“WYES was built by some of the city’s best and brightest leaders, who believed in the power of television to educate, inform and inspire. That mission couldn’t be more important or needed today,” Massa said.

By all accounts, Massa is one of the hardest working and most respected broadcasting professionals in New Orleans television. While still a student at Jesuit High School, he yearned for a career in television.

Over the years Massa not only developed a nose for news but evolved into a natural storyteller and historian with an encyclopedic knowledge of New Orleans’ 300-year history and all the characters, great and small, who made the city what it is today.

Massa began his career as a newsroom intern with WWL-TV during his years studying at Loyola University’s fabled journalism program. He worked his way up to executive producer over a 27-year period. WWL’s viewers have Massa to thank for such documentaries and specials including “Bless You Boys: Gayle Benson,” “Fats Domino: Eric Paulsen Remembers,” “Eye on Hurricanes,” “The Talk,” and “Moon at 90: Landrieu Looks Back.”

A natural fit for WYES Channel 12, Massa began volunteering at the station’s Showboat Auction fundraiser more than 30 years ago while still in his teens. From there he became an intern and a production assistant on Peggy Scott Laborde’s “Steppin’ Out.” He then worked on dozens of WYES documentaries and local programs, including “New Orleans Parades From the Past,” “Jefferson Parish Stories” and “New Orleans TV: The Golden Age.”

“I have been fortunate to work on so many of the station’s cultural and historical documentaries alongside Peggy Scott Laborde. These programs are enormously popular and have done so much to preserve and document the area’s history,” Massa said. “One of my goals will be to strengthen and expand our commitment to local programming and continue that work.”

Massa also talked about the transformation currently underway in public media and digital media, which is presenting challenges as the audience becomes more fragmented. “It also offers real opportunities for using technology to reach new audiences in different ways. WYES has always been more than just a place on the dial, and with the changes and updates in technology, I hope we can capitalize on that and deliver content to our audience in the ways that are most convenient and appealing to them,” Massa said.

Massa said he feels privileged to join the WYES team Cooper is building to carry the station to new heights. He is currently completing a master’s in business administration at UNO.

“Dominic has been a valued asset to WYES through the years and has demonstrated his dedication, passion and support for the station,” Cooper said. “His unique perspective of both public and commercial television broadcasting, his leadership abilities and strong local community connections will make him an invaluable member of the WYES team.”

A graduate of UNO, Cooper started at WYES 32 years ago, straight out of college. She gravitated to public television because of its programming and the station’s viewers. “At its core, public broadcasting is a rich source of educational, artistic and cultural programming. It touches people’s lives and is truly inspiring.”

Cooper said that navigating the Covid-19 pandemic was probably her defining challenge and accomplishment. “Through tactical planning, adjustments and execution, we have maintained a favorable financial position, a steady and committed working staff, and continuity of our productions,” she said.

The pandemic also forced Cooper to navigate the uncertain and remain flexible “while always pulling together to ensure that WYES delivers its best services for our viewers – no matter what obstacles.” They pivoted fundraising activities from in-person to virtual, which also led to developing new initiatives to engage and connect with viewers and donors.

Cooper is looking forward to a new WYES documentary, a music chronology of Irma Thomas’ life scheduled to air Oct. 4. It will be offered nationally to public television stations later this year. Other new programming in the works is a special on the founding of the World War II Museum as well as a new national cooking series. “We have a lot of things in the pipeline but it is too soon to reveal them,” Cooper continued.

Since 1957, WYES has served as the custodian and ambassador of New Orleans unique culture and traditions through its award-winning local and national productions. Cooper looks forward to continuing that tradition and at the same time, taking advantage of new broadcast technology that will enhance and extend their educationally based services.

“I believe that leadership is more than just the technical know-how. It is also a sentiment — the feeling of connection to the community and to the beneficiaries of one’s work,” Cooper said. “Both Dominic and I have deep roots in the New Orleans community and share the commitment to always ensure that the end result of our work is one that will strengthen our community and our region. We look forward to working together to lead WYES forward both now and for future generations.”

WYES is the 12th oldest public television station in the U.S., having begun operations 64 years ago. It provides innovative cultural and education-centered programming for southeast Louisiana and the Mississippi Gulf Coast.