The corner of St. Charles and Louisiana is getting a little greener.

“We’re seeing this now as a great opportunity to not only increase the quantity and quality of public space, but to improve on the previous design,” said Ken Gowland of MetroStudio Architects in his presentation to the committee.

This was the fourth meeting about 3401 St. Charles before the architectural committee. They had deferred the application twice before, due to concerns over the size of the planned development and details of the design. In the last meeting in February, the committee voted for conceptual approval of the plans but recommended adding an exterior garden.

The designers responded by updating plans to include two courtyards, each roughly 60 feet long, that can also function as stormwater reservoirs. In addition, they increased the number of trees along Louisiana Avenue. Gowland emphasized that the expanded green space will be accessible to anyone walking by.

“In terms of addressing open space and landscape features, these are definitely improvements going in the right direction,” noted committee member Beth Jacob at the online meeting on Wednesday.

Other members agreed, but said that they wished the architect had provided a more detailed renderings that would show the development from an eye-level perspective.

“There’s been good progress made. I think the elevations are in a good spot. What I would like to see is more detail,” said committee member Tracie Ashe.

The committee voted unanimously for conceptual approval of the plans, as long as the designers continue to present additional details to the committee. 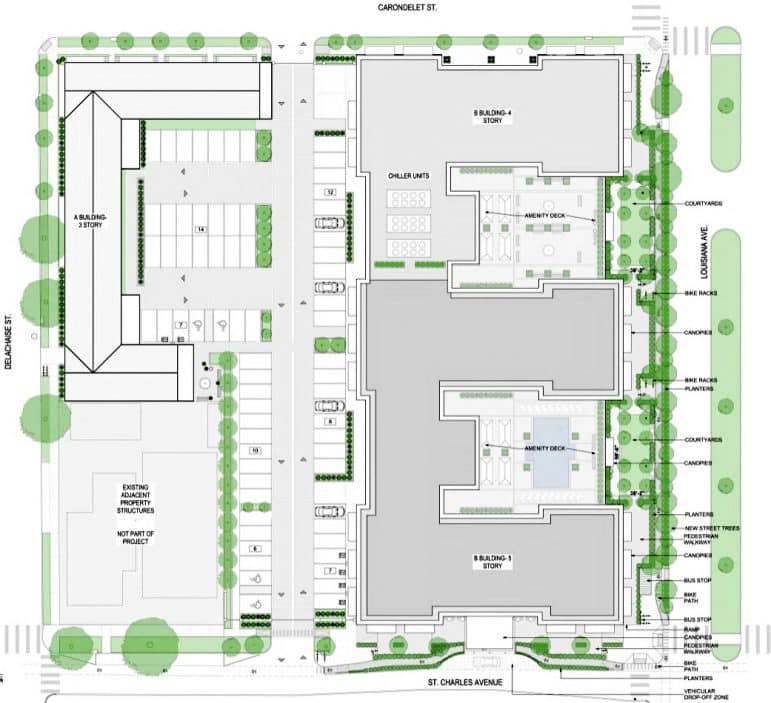 The residential complex will consist of a five-story apartment building on St. Charles and Louisiana and smaller townhouse-style apartments on Delachaise and Carondelet streets, plus 19,000 square feet of retail space. The project will replace a former Rite Aid store that has been vacant since 2018.

That former Rite Aid was originally a K&B drugstore; now the descendants of K&B founder Sydney Besthoff, daughter Valerie Besthoff and grandson Andrew Marcus, are leading plans to turn the site back into apartments.

Although some neighbors expressed concerns about the height of the planned development, the Board of Zoning Adjustments voted in June to let the project go forward.