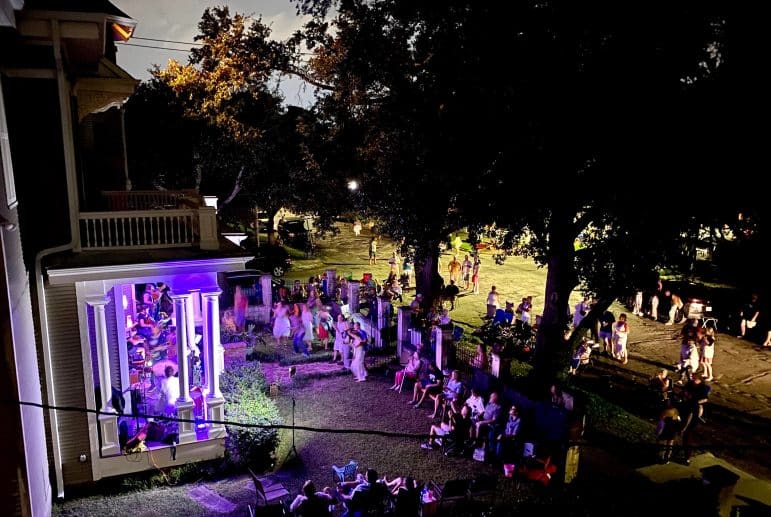 The audience spills into Marengo and Dryades streets during a recent concert.

Porch concerts had been popping up throughout the city when Milan area residents Natalia and Guy Gonzalez began hosting concerts on their Marengo Street front porch.

The tradition started for the Gonzalezes in the fall of 2020, after a musician asked Natalia’s 94-year-old mother if she would put on a porch concert to help out the Radio Bird Quartet. She agreed, and then Natalia took on the project.

“We have had Radio Bird, of course, as well as The Walrus, a Beatles cover band,” Natalia Gonzalez said. “In fact, recently when their Zony Mash show got canceled, they came to our porch and played the concert there.”

They are now presenting shows twice monthly, with Mia Borders booked for an upcoming show. Other established Uptown porch venues include the Constantinople Stage, on the street of the same name, and Harmony Street in the Garden District.

These private venues have been hosting music for friends, neighbors and passers-by almost weekly for many months. The musicians often livestream the concerts to increase their audience and their tip income.

“And fortunately for musicians, there are organizations and individuals in our community who are stepping up to fill in the gap of lost income,” Natalia Gonzalez said. “It is so fabulous that our community is coming together to support musicians at this time. They provide us with so much joy, it’s the least we can do to pay them back.”

One of the more high-profile organizations stepping in is the Krewe of Red Beans. When the krewe’s founder, Devin DeWulf, heard about the canceled fall 2021 festivals, he thought of the musicians whose livelihoods depend on festival performances. Thousands of musicians — and the people who work with them, such as the sound engineers — have lost revenue with the festival cancellations.

So the Krewe of Red Beans created FestFest. “Like when Carnival parades were canceled, and we sponsored ‘Hire a Mardi Gras Artist,’ we are working as a team to support our musicians,” DeWulf said.

By Friday (Aug. 20), the initiative garnered more than 880 donations. With the first $40,000 raised, 28 porch concerts will be raffled off to those who have contributed. FestFest will create a porch or backyard pop-up concert for these winners in Orleans Parish. Everyone who donates can win as long as their location fits safety protocols.

FestFest includes a crowdfunding page to donate fees for musicians whose income has been slashed with the cancellation of the Jazz and Heritage Festival and the French Quarter Festival. Each Friday, winners will be chosen by raffle to be awarded the opportunity to host a concert, and the krewe will help make the arrangements. Musicians will be paid the same amount as for their Jazz Fest performance.

Another organization is Front Porch Gigs, headed by Aaron Wilkinson of the Honey Island Swamp Band, who is also helping the Gonzalezes with their concerts. Hosts pick the time and place, and the organization does the rest. Its website highlights the role of music in New Orleans: “Now more than ever, we all need the healing power of music. Our mission is to bring that power to the people.”

Wilkinson started Front Porch Gigs after a successful birthday party for a 10-year-old whose parents, close friends of his, wanted a trumpet player for a parade at the socially distanced occasion in the spring of 2020. Afterward, they all got to talking about expanding the idea to bring live music into neighborhoods.

“Porch concerts seem to ebb and flow,” Wilkinson said, “depending on the pandemic, and on what is open. I have to say — with the surge in Covid cases these days, the porch concerts are surging as well.

“I think that porch concerts will become part of the New Orleans’ musical landscape.” 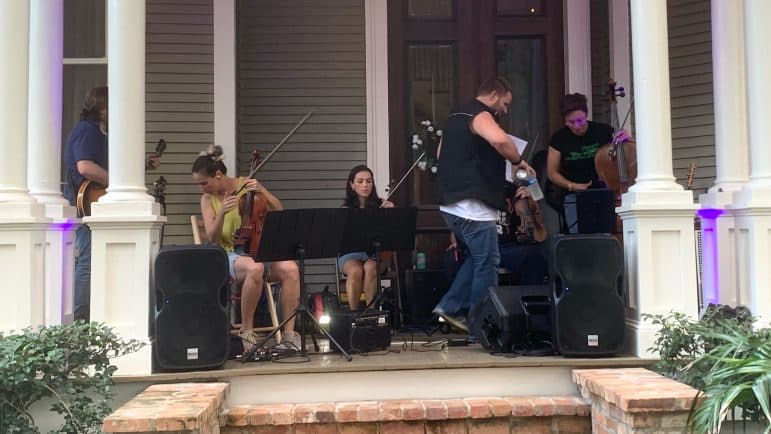 Members of The Walrus and Electric Yat Quartet – Jonathan Pretus, Amelia Clingman, Natalia Cascante, David Pomerleau and Jack Craft — prepare for a concert on the Marengo and Dryades stage on Aug. 7.

Also part of the new musical landscape — doing porch concerts before there were porch concerts — is Piano on a Truck. When Jacques Ferland came up with this idea in the summer of 2019, it was difficult to find willing piano players. And it was too hot.

So it wasn’t until the pandemic hit and clubs closed in March 2020 that it really took off. “Think of it as a piano rental that happens to be on the back of a truck,” Ferland said. There are solo piano player gigs, pianos that accompany a band, in front of porches, in backyards and in public parks.

André Bohren, who plays both drums and piano, is one of the piano players who has played Piano on a Truck. “This is not my usual club scene,” he said. “But it shows New Orleans’ love of music, and it brings a sanity to our lives. I must have done 100 porch or other alternative outdoor concerts in the last year and a half.”

A versatile musician who plays everything from classical music on piano to percussion and back vocals with Johnny Sketch and the Dirty Notes and The Walrus, he started a band called the Desert Nudes to respond to the demand for private outdoor house concerts.

Vanessa Niemann is lead singer of Gal Holiday and the Honky Tonk Revue, one of the bands now on the FestFest roster of music groups to be booked in the Krewe of Red Beans’ donor raffle. “I was so looking forward to festival season,” Niemann said.

“As people may know, this is when many musicians make a lot of their income. So for the Krewe of Red Beans’ initiative FestFest to help us recoup some of the loss is wonderful,” she added. “My heart also goes out to all those visual and crafts and other artists who would have had booths at Jazz Fest, and also to all the temporary workers who earn money working behind the scenes as well as out front at the Fest.”

An earlier version of this story misspelled the Electric Yat Quartet violinist’s name. It is Natalia Cascante.