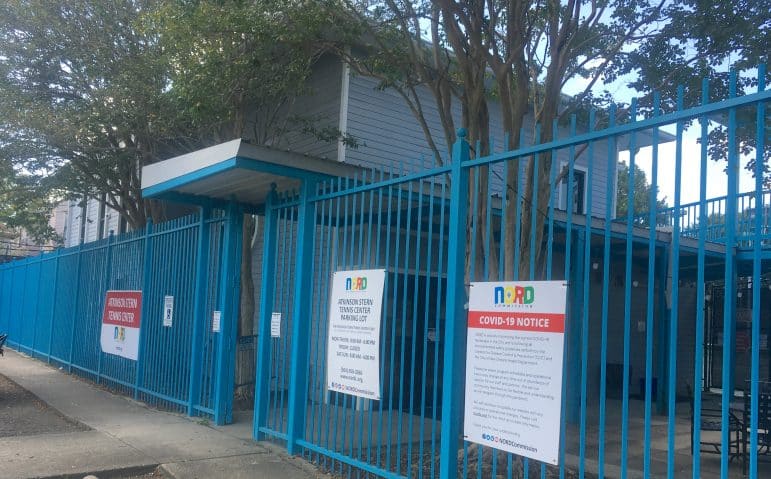 Calling Uptown’s Atkinson-Stern Tennis Center one of the city’s jewels, Larry Barabino Jr., CEO of the city’s recreation commission, said NORD is moving forward with its renovation plans for the historic tennis venue.

Barabino told the City Council’s Community Development Committee last week that the renovations that began in late 2020 are expected to continue until at least the end of this year. That information session will be discussed tonight (Aug. 17) at the Delachaise Neighborhood Association meeting.

Opening in 1897 as a private club, Atkinson-Stern is one of the nation’s oldest tennis centers. The city has owned and operated it since 1973, when it brought in local tennis pro Nehemiah Atkinson to manage the center.

For the next two decades, Atkinson, the first African-American to be inducted into the Southern Tennis Hall of Fame, trained and coached countless young New Orleanians.

Across from the historic tennis facility and its nine Hart-Tru clay courts is the Saratoga Playspot, with a hard-surface court that is popular with neighborhood families.

The Saratoga Playspot got new fencing, wind screens and improved lighting, Barabino said, but crews stopped short of a needed resurfacing. That project will resume once the 2021 bond funds are released, he said. If they are released in August, it will be finished by the end of 2021.

The area is used for children’s tennis, yoga and more, including community events, neighbors said at the meeting. It closed down as crews tore out overgrown vegetation and the old fence, and it has remained closed through the summer, although the work stalled as NORD waits for the funding to resurface the court.

“It may not be in great condition for Serena Williams to go play on it, but is it OK for kids to play or for it to be used for some of those other children’s activities?” District B Councilman Jay H. Banks asked Barabino. “I don’t want to put anyone in an unsafe position, but I don’t want to sacrifice good waiting for perfect.”

Barbino said he will work with the Atkinson-Stern management to open the Playspot  until work begins on the court.

That court is especially important because it’s the only free court at the center, said Donna Robertson of the Delachaise Neighborhood Association.

“It is thereby the only court that is accessible to many of the people in the neighborhood,” she said, “and in particular to the children in the neighborhood who may not be able to pay the five or seven dollars for the clay courts across the street.”

Robertson pointed out the court not only needs to be resurfaced, it needs drainage work. “Even in the slightest rain, it holds and pools water hours after the rain, making it unusable,” she said. Barabino assured her that the resurfacing will include drainage improvements.

The Playspot court is a hard court, the most common surface for tennis. If the children learning on that court go on to compete, they will need to play on hard courts.

Once it’s resurfaced, the court will be multipurpose, Barabino said. It will be restriped not only for tennis but for pickleball, and pickleball equipment will be available at the site.

Pickleball, a 56-year-old paddle sport, has been quickly picking up enthusiastic new players. It grew by more than 21 percent last year to an estimated 4.2 million U.S. players, according to USA Pickleball.

At Banks’ request, Barabino previously met with neighbors about developing the youth tennis program at Atkinson-Stern. NORD is working with the U.S. Tennis Association’s Southern Section, he said, to strengthen its after-school tennis programs.

NORD is also in the early stages of hiring a tennis pro who will develop the programs and schedule tournaments, Barabino said.

Milan-Delachaise resident and avid tennis player Helene Barnett, who said she is on the Atkinson-Stern courts several times a week, told the committee that she owes her skills and her years of enjoyment to the public venue and its founding manager.

“I had the unique pleasure of actually being introduced to the sport, many, many, many years ago, by Mr. Nehemiah Atkinson,” she said  “It was very important to him that inner city youth, like myself, be introduced to a sport that for a very long time had been out of reach. He was gentle and fierce and passionate about that point.” 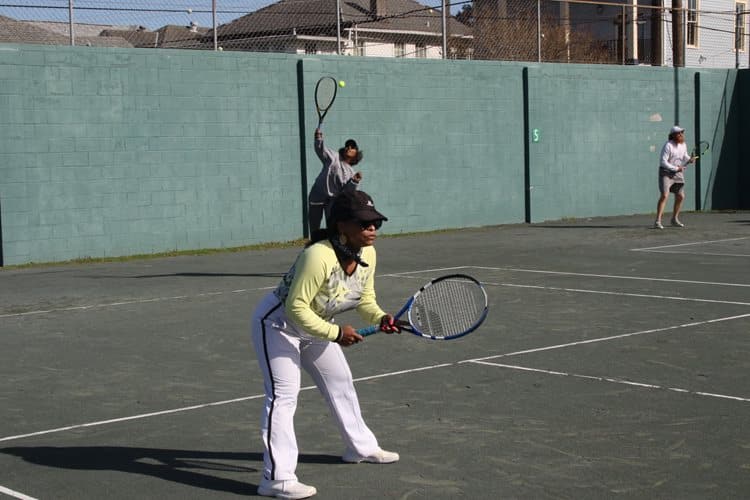 Atkinson-Stern Tennis Center is nestled into a residential neighborhood.

On the other side of Saratoga, NORD crews repaired a busted pipe in the men’s locker room, the HVAC system, the elevator and the roof railing around the cupola; replaced some lighting and fans; and gave the clubhouse and fence a fresh coat of paint.

NORD was helped by two anonymous donors who gave $50,000 to restore and maintain the clay courts. That work is slated to start in September.

Drainage for the courts, which also hold water after a rain, is part of the improvement plan, as is a new sprinkler system to help with maintenance.

After Atkinson-Stern was damaged by Katrina’s winds and the levee failure’s floodwaters, the facility underwent a $2.2 million renovation in 2009.

In addition to the current physical improvements, NORD plans to add some basic conveniences. Now, players reserve a spot online and pay in cash when they arrive at the center. An hour on the clay courts costs $5 on weekdays and $7 on evenings and weekends.

NORD is working to set up an online payment system, so that players can pay when they reserve their court. A plan for a monthly memberships is also in place, Barabino said.

Barabino said he’ll meet again with the neighbors, probably in mid-October, once the ball is rolling on the renovations and other improvements.

“The location of this facility is phenomenal,” Bartlett said, while asking for the additional public meeting before the renovations are complete. “It deserves to be a really stellar facility and compete with City Park, and compete with Audubon. I see no reason why it shouldn’t.”