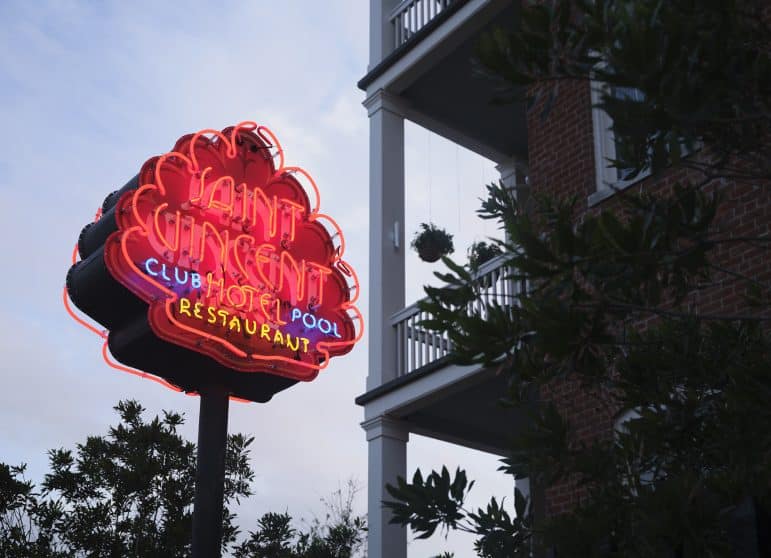 The stage was set on a balmy summer night when musician, vocalist and indie favorite St. Vincent captivated the audience in a courtyard that once saw saints of another sort.

It was the opening night party for Hotel Saint Vincent in June, and it seemed like the A list was out in full force for one of the more posh hotel opening celebrations the city had seen in a long time.

The party was also a revelation: It showcased the long and winding road of the building complex constructed as an orphanage just after the Civil War into its current incarnation as a 75-room hotel developed during another seismic cultural and economic shift, the COVID-19 pandemic.

Hotel Saint Vincent is a project of MML Hospitality, helmed by Larry McGuire, Tom Moorman and Liz Lambert, whose expertise in developing hotels and restaurants — transforming, might be a better word — is seen in Austin, Texas, where the company is based.

The group worked with local developers Jayson Seidman and Zach Kupperman, who are part owners and developers. They are co-founders and developers of The Drifter in Mid-City, and Seidman is a co-owner and developer of the Columns, a late 19th-century Thomas Sully designed house turned hotel and bar that just went through its own re-do in 2020 and early 2021. Also part of the Hotel Saint Vincent ownership is real estate developer Christian Strobel.

The Austin-based developers said they feel at home in New Orleans. “It means so much to be part of New Orleans — it is real. There is grit and humor, kindness and Southern charm,” Liz Lambert said.

“People call you ‘baby’ and it feels so right. People root for each other,” she continued. “I couldn’t imagine a better place to be a host – to bring people together in respite from the everyday, locals and visitors alike, to give them a place to slip on a silk robe, to slow down and have an Aperol Spritz by the pool.” 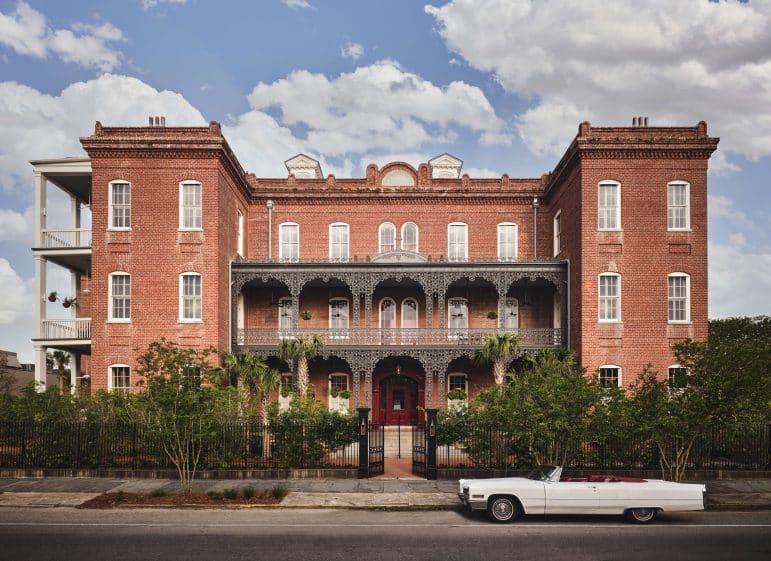 Located in the Lower Garden District, the monumental four-story red brick complex on the corner of Race and Magazine streets (uptown, lake side) was designed by Thomas Mulligan, with the cornerstone laid in 1864. The building held the St. Vincent Infant Asylum, founded at the request of the Daughters of Charity to be an orphanage, because many children had lost parents during the Civil War.

It was on the site of an old farmhouse, and was built in three stages, with the orphanage constructed first, followed by a building for expectant mothers, then a laundry and stables (“carriage house”) in the back. The federal government saw this institution as important to post-war recovery and paid the labor costs, including those of the former slaves who worked on it, according to “Margaret, Friend of Orphans,” by Mary Lou Widmer.

The Margaret of the book was Margaret Haughery, renowned in New Orleans for her philanthropy, with much of her money coming from her bakery. She was instrumental in initially funding the construction of St. Vincent’s, and set aside money in her will to maintain it and continue its mission after her death.

Facing Magazine Street, there are two wings connected in the middle, which is highlighted by cast-iron galleries. Those wings go back toward Camp Street (but not all the way) then are connected by another building, creating a courtyard. There is a gate on the Race Street side.

Changes to the exterior included gallery ceilings painted a traditional sky blue and hanging ferns were added. Bevelo gas lamps harken to the building’s 19th-century roots. Palm trees and a neon sign proclaiming the hotel give it a 1930s Los Angeles vibe. 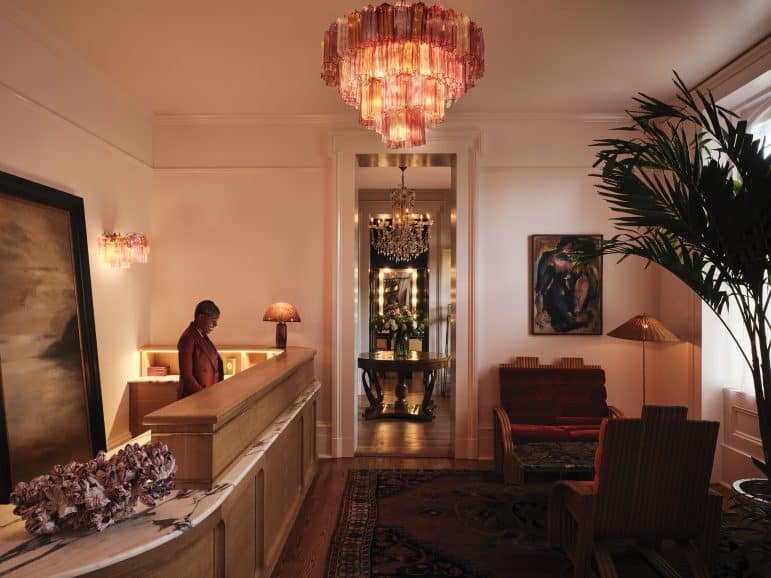 It’s the interior that has seen the biggest changes, of course. Lambert McGuire Design, the sister company of MML Hospitality, turned to Italy for its design inspiration.

A mid-century feel starts in the lobby and check-in area adorned with vintage Murano glass chandeliers and furniture that look like it was plucked from a chic Roman villa.

The Paradise Lounge’s mural hand painted by local artist Ann Marie Auricchio is a light and airy tropical scene highlighted by Bird of Paradise flowers and is the backdrop for hotel guests or cocktail enthusiasts to sit and enjoy libations. The custom tile floors are a recreation of tiles found elsewhere in the building. Right now, it looks like management is still fine-tuning the layout of the furniture, as subsequent visits have seen different configurations.

The lounge also has access to the front porch and to the courtyard, where there is a statue of the Virgin Mary in her own grotto.

The Chapel Bar is at the opposite end and, as of now, open to hotel guests only. It was, as the name indicates, the former chapel and according to lore, it was where unwed mothers would drop off their children.

Strictly for cocktails and late-night lounging, the feel here is lush velvets and deep, rich colors. 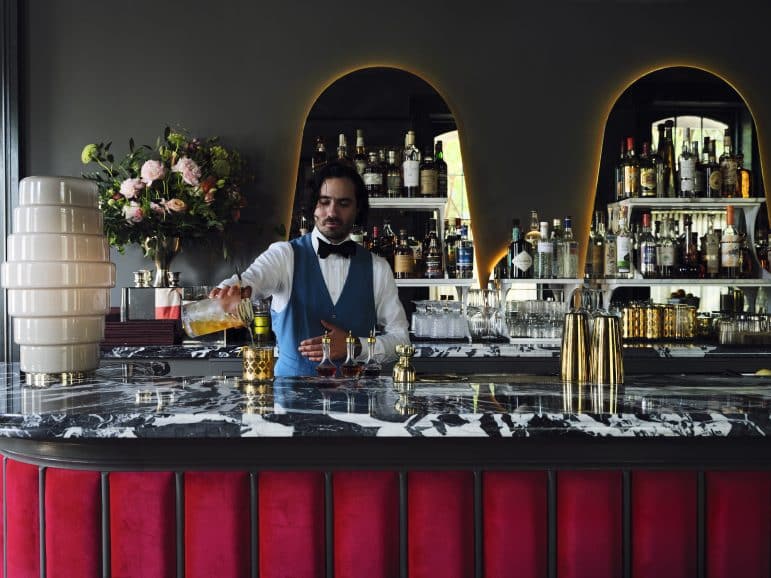 The former chapel is now a bar for hotel guests.

Also for guests only (for now) is the Saltillo-lined pool and pool bar in the courtyard. Look up towards the back building and you will see a gargoyle by artist Thomas Randolf Morrison. It was there before the hotel renovation, and it has stayed, no doubt checking out the scene below.

San Lorenzo restaurant has a coastal Italian coastal flair in design and in cuisine, with touches of New Orleans with a menu (at publication) that includes a flounder piccata, summer truffle risotto, fresh linguine vongole and a raw bar that includes oysters and snapper tartare.

Rounding out the restaurant offerings is the Elizabeth Street Café New Orleans – an offshoot of an Austin café — which serves French-Vietnamese style cuisine and has a bakery.

The café has a direct view of the modern addition constructed to host special events, including art exhibitions, with the developers hoping to start community initiatives to utilize it. 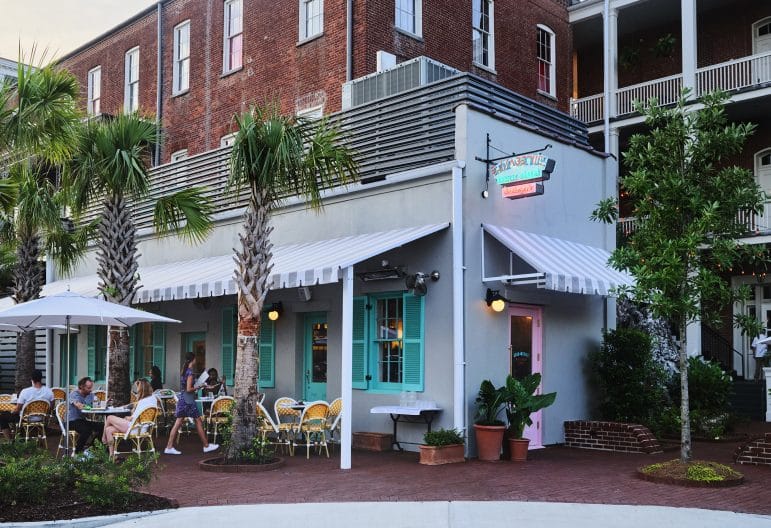 “I am most excited for the hotel to become part of the fabric of the city, for the music that will be played there, for the mothers who will be brought for brunch, for the reunions, the first dates, for the events, big and small, that wed a place to a city, and make it belong,” Lambert said.

There are a variety of rooms and suites, such as the Mary Suites which face the Virgin Mary grotto and Courtyard Kings that provide easy access to the pools. Rooms are painted in a gray achieved by mixing Farrow & Ball Elephant’s Breath with the company’s deeper Mole’s Breath creating a serene canvas for the artwork, decorative pieces, and beds so comfortable that luxuriating in the morning is almost a given. 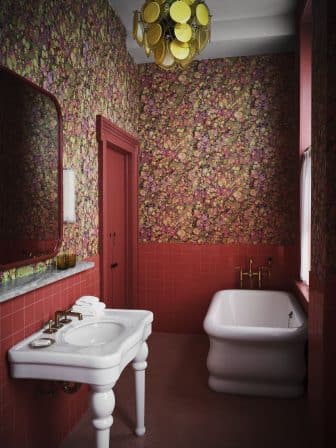 The bathroom’s Voutsa wallpaper is in a red-and-pink traditional Florentine marble bookbinding pattern found within one of Haughery’s ledgers.

The designers liked the patterns so much they also used it for guest robes, as well as what the check-in staff wears as shirts or as other elements. And if you really like it, robes in that design are for sale at the in-house store ByGeorge — also an Austin import — a place to get luxurious clothing and items.

The location of the building in the Lower Garden District was part of the claim by Jean Baptiste Le Moyne Sieur de Bienville, who founded New Orleans in 1718.

His property included land upriver from the French Quarter, extending along the east bank to about Nine Mile Point, then referred to “the bend above Chapitoulas.” Nine Mile Point is now unincorporated land in Jefferson Parish between Westwego and Bridge City, across the river from Ochsner Medical Center.

On the east bank, the area comprises Uptown, including the land between present-day Howard Avenue, Jackson Avenue, South Claiborne and the river, as well as adjacent areas of Jefferson Parish,

The land was granted to him by the Superior Council of Louisiana on March 27, 1719, and was confirmed by the Company of the Indies, proprietors of the Louisiana colony, in Paris on Feb. 6, 1720.

But before the Company of the Indies could confirm that, another royal order was issued Nov. 7, 1719, which forbade governors, lieutenant governors and intendants in the colony to possess plantations, allowing them to only have vegetable gardens.

Bienville’s way around this was order was to rent some of the land to settlers, including Germans who had been displaced by a hurricane in 1722.

He retained for his “vegetable garden,” the land between Canal and Felicity streets.

In 1726, Bienville sold 20 arpents to the Jesuits, who purchased an additional five arpents through Bienville’s nephew, the Sieur de Noyan, in 1728, to create a plantation. Following the end of the French and Indian War in 1763, the Jesuits were kicked out of the area with their possessions and lands seized and sold at public auction.

From there the land was sold and resold as part of plantations, parts of which were subdivided into faubourgs by Creole architect, city planner and surveyor Barthélemy Lafon.

Hotel Saint Vincent is located in what was named Faubourg de Annunciation. 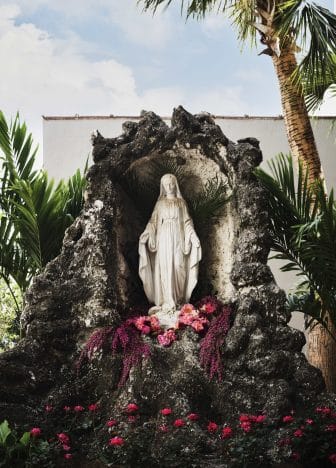 After it opened its doors as St. Vincent’s Infant Asylum in 1867, the building continued the mission set for by the Daughters and Haughery. Adoptions took place through the early 1980s. A quick look on social media has shown quite a few former adoptees have gone back to the building to check it out.

In 1992, Sally and Peter Schreiber purchased the building, renovating it into a bed-and-breakfast and hostel. Some may remember it also featured a teahouse.

Now, travelers and those looking for a dose of subliminal cool are now gracing the porches, courtyards and rooms of Hotel Saint Vincent. And maybe they will run into ghosts of orphans and mothers past — as a truly New Orleans hotel always has a spirited past.