Three rundown ranch-style buildings that the Historic District Landmarks Commission recently approved for demolition were classified by HDLC staff as “non-contributing,” a label given to buildings found to be “not historically or architecturally significant.”

To the Faubourg Delachaise neighbors who addressed the commission on Aug. 4, however, the one-story four-plexes at 900 Aline St., 901 Foucher St. and 909 Foucher contributed to the neighborhood in ways that may not be evident to a casual observer or HDLC commissioner.

“I live right across the street from this property,” said Laurel Street resident Debby Pigman. “And although I will not be very distressed to see the buildings disappear, I am very distressed that a lot of my friends in the area were forced to move.”

The loss, she said, is not just personal — it’s a loss to the entire neighborhood. “This development,” she said, “allowed our neighborhood to have a diverse and very interesting culture, and we are losing some of that with the demolition of these buildings.”

The rents in the 1960s-era brick buildings were below the market rate for the area, said Pigman, who serves as president of the Faubourg Delachaise Neighborhood Association. That allowed the 12 families who lived in those homes to have convenient access to transportation, groceries and drugstores, and amenities such as the multi-service Lyons Recreation Center.

An Aline Street neighbor, P. Adam Kelly, addressed the effect such demolitions have on the city’s housing stock for low-wage workers.

“Each of these events is a small part of a growing crisis of affordable housing in our city,” Kelly said, “and it seems to me like nobody within the city or state is doing anything at all to address this crisis.”

He said he knows it is not within the HDLC’s purview to address the city’s affordable housing crisis, but wanted his concerns to be on the record in connection with the demolitions.

“This represents a loss of affordable housing in Faubourg Delachaise in the Uptown area with no attempt whatsoever to replace this housing with any other affordable housing,” he said, “and to me that is a true loss for the city.” 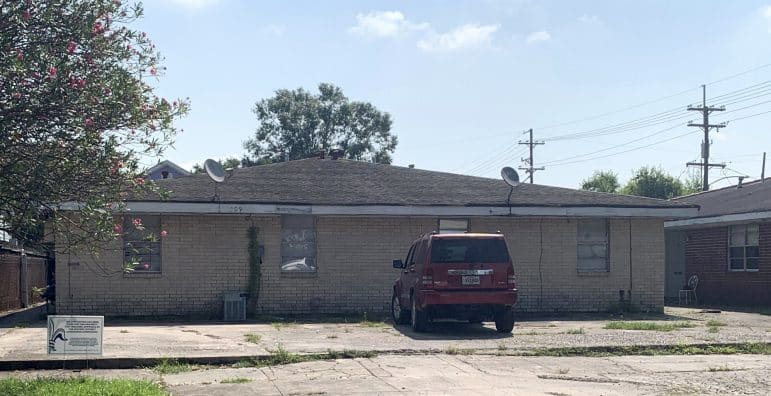 The commission, which bases its demolition decisions on a building’s architectural qualities, considered each of the buildings separately and voted unanimously each time to allow them to be razed.

The commissioner for the Irish Channel, Greg Hackenberg, recused himself from the hearing and vote  — he is slated to be the architect for the project.

Developer Scott Powell of Butler Holding Co., who is working with a group that includes James H. Brown III of Baton Rouge, told the commission the developers plan to build single-family homes on the contiguous lots.

He noted that by replacing the nonconforming four-plexes with the single-family residences, the developers will be working within the district’s zoning.

According to an application filed with the city, the developers plan to subdivide the 14,375-square-foot lot that holds the two Foucher Street buildings into four long, narrow lots, the kind typically found in New Orleans’ 19th century working-class neighborhoods. The homes on those lots will have Laurel Street addresses.

The new homes are likely to enhance the aesthetics of the block, but Pigman and Kelly said they are still saddened by the development.

“Plans for the development of this parcel,” Pigman said, “will change not only the physical landscape, but the composition of our neighborhood.” 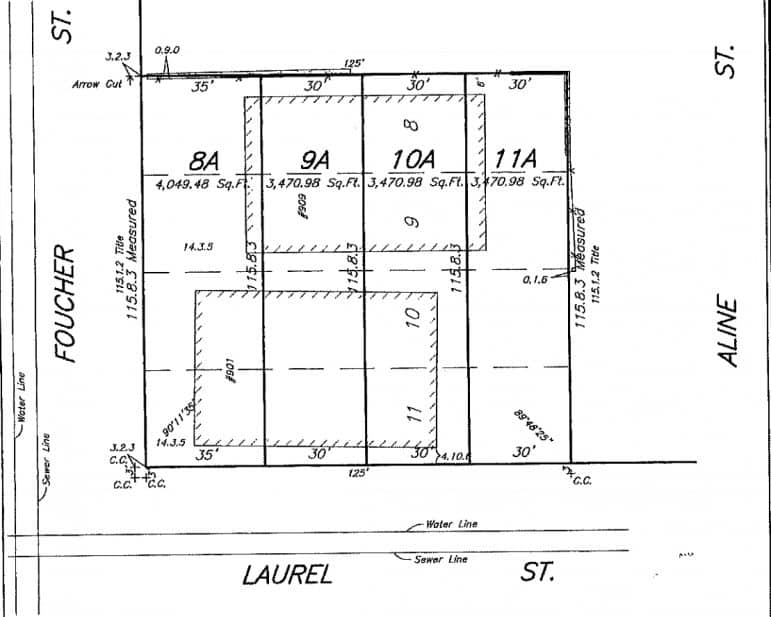 Detail from the resubdivision survey showing the two Foucher Street buildings and the four proposed lots.