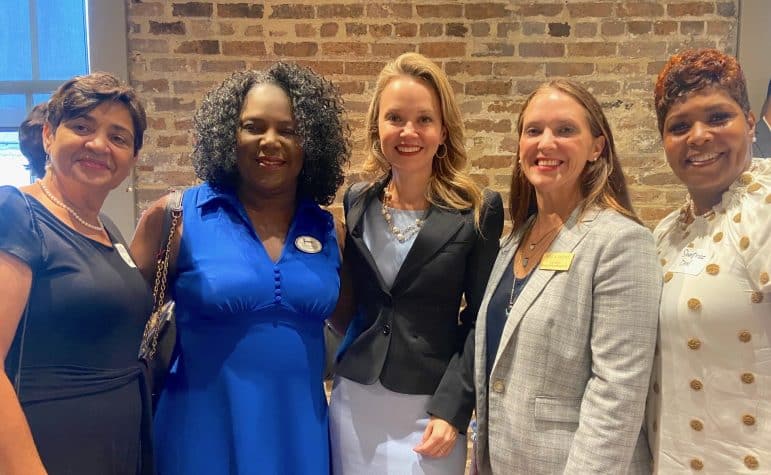 A large crowd gathered Wednesday evening (July 7) at Calcasieu in the Warehouse District to show their support for City Council President Helena Moreno, one of dozens of candidates who will be qualifying next week for various municipal offices. Popular with voters, Moreno has put together a substantive war chest, which makes her a formidable candidate. Only affordable housing activist and former candidate Kenneth Cutno has signaled he will run against her for the City Council at-large position.

There is lots of competition in many of the other races. Former state Sen. J.P. Morrell will face off for the other council at-large seat against two current City Council members: Kristin Gisleson Palmer and Jared Brossett, who is term-limited. Morrell is well-situated financially. Brossett will try to overcome his negatives from his 2020 drunken driving incident. Some people (but not this writer) think Palmer might make a last-minute decision to run for re-election in District C.

The District C race has already drawn a big field of possible contenders, including attorney Freddie King III, who would be an early favorite. Attorney and nonprofit executive Stephanie Bridges, who almost won a judgeship last year, will also be a strong candidate. Others who say they will qualify include Treme businessman Alonzo Knox, French Quarter LGBTQ+ activist and writer Frank Perez, and City Hall neighborhood engagement liaison Stephen Mosgrove.

One high-profile candidate who hasn’t made up his mind yet is real estate broker Eugene Green, who has previously run for City Council and for the State Legislature. Some pundits thought School Board President Ethan Ashley, who is also facing term limits in a few years, would seek the seat. Ashley said yesterday he is not interested in the council race but would be looking at other possibilities in the future.

If Council District B member Jay Banks is not re-elected, his replacement could be a woman.  Real estate broker Roz Thibodeaux, and attorneys Lesli Harris and Rella Zapletal have all been talking about the race along with former Clerk of First City Court Timothy David Ray. Banks is well liked by his constituents but may have been damaged by the Dryades YMCA controversy.

Harris recently resigned from her position as chief of staff to Loyola University President Tania Tetlow and returned to private practice. Zapletal has made a name for herself as a Southeast Louisiana Legal Services staff attorney. Harris and Zapletal are thought to have met to decide which of them has a better chance to defeat Banks. For the first time in many years, Black voters are no longer the majority in District B. Banks, Harris and Ray are Black; Thibodeaux and Zapletal are White.

Assessor Erroll Williams will once again face Jamaican-born electrical contractor Anthony Brown, who disagrees with New Orleans system of taxation. Four years ago, Brown was removed from the ballot for failure to pay taxes. Williams has been a district or city-wide assessor for 36 years.

Sheriff Marlin N. Gusman has drawn former Independent Police Monitor Susan Hutson as his only mainstream opponent. First elected sheriff in 2004, Gusman is seeking a fifth term. He has modernized facilities at the Sheriff’s Office. Running as a progressive alternative, Hutson served as police monitor for 11 years. She opposes Gusman’s efforts to build an 89-bed facility to house inmates with psychiatric problems or other special needs.

Clerk of Civil District Court Chelsey Richard Napoleon is completing her first term after having served as deputy clerk for many years. Napoleon is not expected to draw strong opposition. Coroner Dr. Dwight McKenna, also in his first term, should be easily re-elected.

With the announced retirement of long-time Clerk of Criminal District Court Arthur Morrell, several candidates have voiced their intention to seek this position. Darren Lombard currently serves as Clerk of Second City Court and previously worked in Morrell’s election division.  He has strong ties with the Louisiana Secretary of State’s Office and is the nephew of Appeals Court Judge Edwin Lombard.

Lombard will face Austin Badon, currently Clerk of First City Court. Badon previously served as a state representative and also ran for the City Council. Under Badon, the clerk’s office has undergone a major modernization to make it more efficient and customer friendly.

Mayor LaToya Cantrell appears to be sitting in the catbird’s seat. According to a recent poll by the New Orleans Crime Commission, 61 percent of voters support her re-election.  That means, of course, 39 percent would prefer a different mayor. Trying to expand that percentage are three lesser-known candidates – Belden “Noonie Man” Batiste, Luke Fontana and Leilani Heno.

Batiste, an activist, and Fontana, a civil rights attorney, have run for office previously. This will be Heno’s first race. Batiste gained a drop of notoriety recently from his dispute with Council member Jay Banks. The pair had a court date again today before Judge Jennifer Medley. Fontana is an environmental activist and president of Save The Wetlands. New Orleans born and bred, Heno is a life coach and personal trainer.  She has no qualms about criticizing Cantrell on crime and other key issues.

A winning campaign these days requires a solid message, great social media, an appropriate presentation style and plenty of cold hard cash. Let’s see which candidates are best able to put that package together.