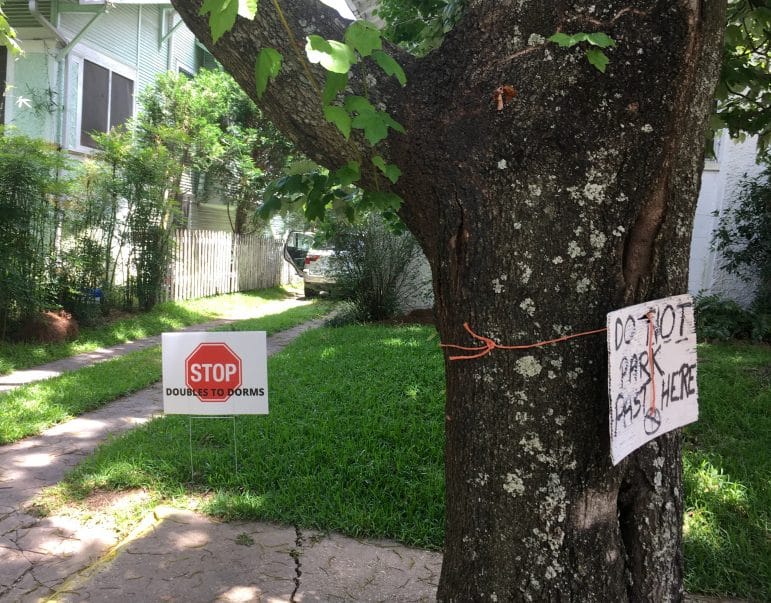 A Broadway Street resident expresses frustration with both parking and the student housing conversions in the neighborhood near Tulane and Loyola universities.

The City Planning Commission on Tuesday (July 13) gave a thumbs-down to continuing and expanding an off-street parking mandate in the University area aimed at stemming the tide of “doubles to dorms” conversions. The commissioners backed the city planners, who recommended denying the proposal, calling it “inappropriate, regressive and harmful.”

The concerns voiced by commissioners, the City Planning staff and advocacy groups have sent the proposal’s proponents, District A Councilman Joe Giarrusso and a host of neighborhood associations, back to the drawing board for further tweaks.

The measure would establish a zoning district, the University Area Off-Street Parking Overlay District, where developers are required to create an off-street parking space for each increase in the number of bedrooms.

The City Council will next vote on the proposal. In September, the council approved an Interim Zoning District with an off-street parking requirement despite the Planning Commission’s recommendation for denial. That IZD is set to expire in two months.

Before the proposal goes to the council, Giarrusso will be speaking with Carrollton area neighbors to refine the overlay, he told Uptown Messenger. “We have four to a half dozen ideas right now,” he said, “and some hybrids of those ideas.”

The overlay, which creates a district within the base zoning that has special requirements, is designed to deter developers from transforming historic homes into upscale student housing. The conversions are often created by building out to the setbacks or adding a second story.

7612-14 Burthe is one of nearly 50 on a list of properties designated as  “doubles to dorms” conversions.

The housing is marketed to affluent college students who lease it by the bedroom — a business model that can quadruple a building’s rental income. It creates an incentive to build as many bedrooms as can fit into a property; the overlay is intended to reduce that incentive.

Neighbors began noticing the conversions about three years ago and have been mobilizing to curb the trend, saying it strains infrastructure, prices housing above what other potential owners or tenants can pay, and multiplies the number of transient residents who have no vested interest in their neighborhood.

The temporary overlay, which has been in effect since March 2020, applies to the University area immediately surrounding Tulane and Loyola universities: from St. Charles Avenue to South Carrollton Avenue, Claiborne Avenue and Audubon Street.

While the proposed permanent overlay would be limited to residential areas only, no longer applying to properties zoned for commercial or mixed use, it also expands the area by about 3 square miles to include Pigeon Town and Hollygrove to the north and the Audubon and Black Pearl neighborhoods to the south.

The overlay area was expanded at the request of neighborhood leaders, Giarrusso said, who were concerned the student-housing conversions would start spreading as developers are stymied in the University section.

“For the more northern part, not only do you have to worry about expansion because of Loyola and Tulane — but Xavier is there,” Giarrusso said. 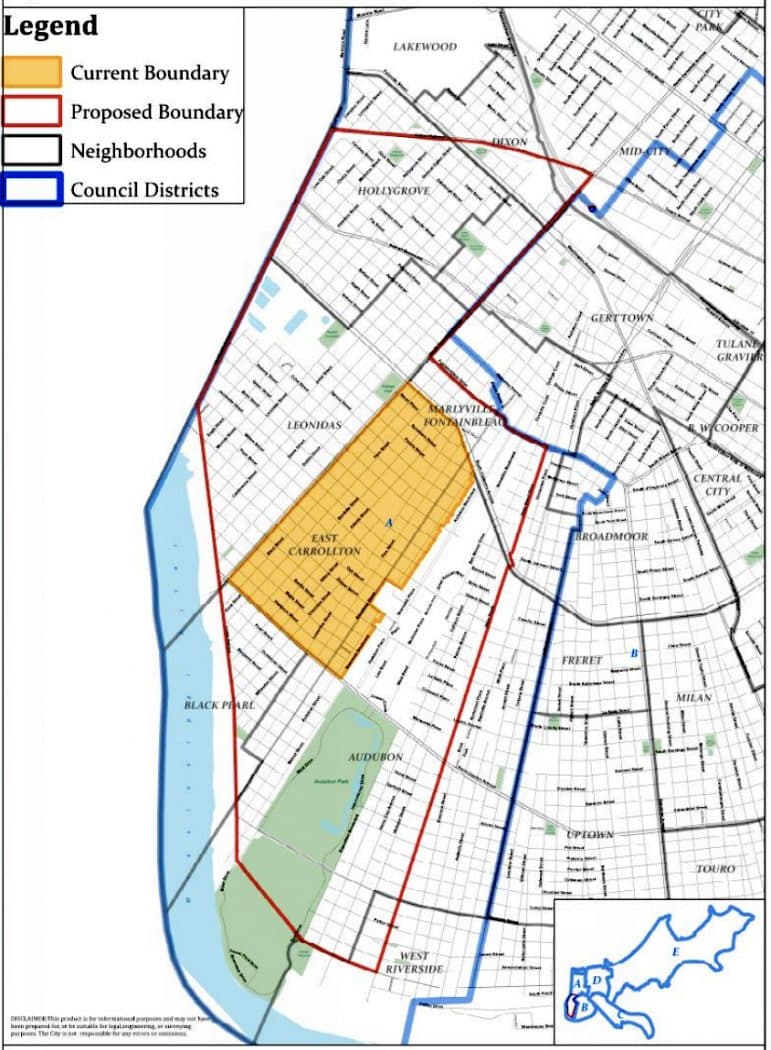 Proposed expansion of the University Area Off-Street Parking Overlay. The current area is shaded in orange. The expanded area is outlined in red.

Opponents and supporters of the measure agree that affordable housing is a priority for New Orleans, but they disagree fundamentally on the effect the overlay would have on the price of homes and leases.

Housing advocacy groups — Louisiana Fair Housing Action Center, the Greater New Orleans Housing Alliance and HousingNOLA — lined up to express their opposition at the hearing, agreeing with the CPC staff’s statement that requiring off-street parking would raise the cost of housing.

“The current practice of converting doubles to student housing likely increases prices for those units, but the solution of requiring parking spaces for new bedrooms will also increase construction costs and housing prices,” said Maxwell Ciardullo of the Louisiana Fair Housing Action Center.

Alex Posorske, director of public transportation advocacy group Ride New Orleans, told commissioners he believed the overlay would not only “incentivize car use to the detriment of transit riders” but make housing less affordable and less equitable.

“Parking regulations such as this are used nationwide as a form of modern-day segregation, something that has a long and sad history in New Orleans and something that the current leadership of the city has rightfully pledged to defeat,” Posorske said.

Giarrusso said he would like to see the fair housing advocates work with his office and the neighborhood organizations to seek equitable solutions.

“I understand advocacy groups want to take these principled positions,” Giarrusso said. “At the same time, we have to be solution-oriented for the people who are living there — looking at not only what is good policy but what is good practice.”

Audubon Street resident Keith Hardie, the vice president of Maple Area Residents, disagreed with the premise that parking requirements will always increase the cost of housing. These students developments are actually the antithesis of affordable housing, he said.

He notes that the developers outbid other potential buyers on properties and then buy out tenants who were paying affordable rents. They then convert the apartments to luxury units they can rent for $1,000 to $1,500 per bedroom, as much as the fair market rent for an entire apartment.

“The CPC staff seeks to impose the overly simplified notion that increased density is always good for affordable housing, failing to acknowledge that when there is a pool of renters willing to pay far above market rate, encouraging increased density will only drive out low-market units and reward developers,” Hardie said.

‘This is not a parking issue’

Before voting unanimously to deny the proposed overlay, several commissioners stated that, while taking issues with other aspects of the overlay, they did not agree with the staff assessment that it would hurt affordable housing development.

“I think this is styled as a conflict between affordable housing and doubles to dorms, and I think it’s really unfortunate that it’s framed that way,” commissioner Robert Steeg said. “I think that doubles to dorms, in general, are not creating affordable housing. They are taking advantage of a loophole in the law, and I think they are having a terrible effect on the neighborhood that they’re in.”

Steeg’s major concern with the overlay, he said, was the geographic expansion beyond the University section, saying it could affect affordable housing in areas like Pigeon Town and Hollygrove. He said he supported exempting any building with a homestead exemption, which is included in the current proposal.

Speaking earlier in the hearing, Robert Rivers, the executive director of the City Planning Commission, said the developers are taking advantage of zoning regulations that allow up to four unrelated people to live together by renting out individual bedrooms in one apartment under four separate leases. “The reality, though, is that this is not a parking issue,” he said, “although this neighborhood has historically had parking problems.”

Rivers said he supported greater control by the Historic District Landmark Commission and other measures, but not the parking overlay.

“The concern that we have this particular approach is that by basically using parking as a proxy to deal with a broader neighborhood change, it really does undermine a lot of very important planning policies that are built into the Master Plan,” he said, adding: “We are still are and always will be open to continuing the conversation and working towards a more reasonable solution.”

This story has been updated to correct a quote by Maxwell Ciardullo of the Louisiana Fair Housing Action Center and to remove an erroneous statement that the overlay currently includes an exemption for affordable housing.