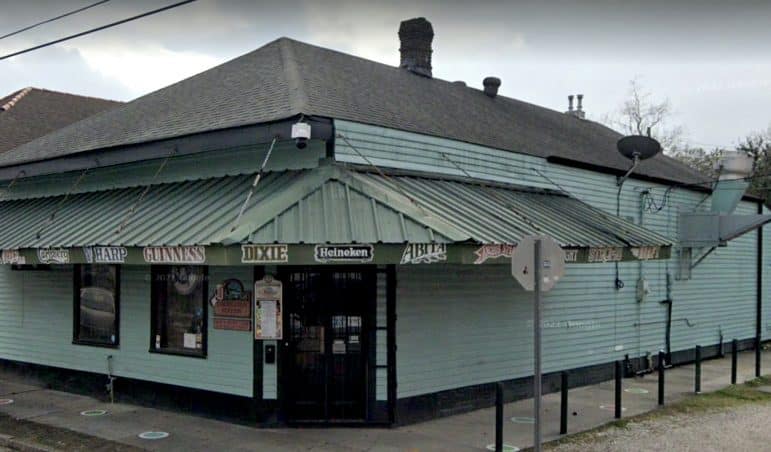 The open-mic show that boasts that of being “New Orleans’ (once) longest running uninterrupted weekly comedy event” has returned to the stage after its long interruption.

Back from the pandemic, “Think You’re Funny” at Carrollton Station. encourages comedians, both experienced and new, to take to the stage and work out their material in front of a live audience.

Cassidy and Mickey Henehan co-host the weekly show. Mickey Henehan said that the local open-mic has wandered from bar to bar over the course of many years. As he explained, the show has previously found a weekly home at spots such as True Brew, Lucy’s and Keystone’s, but has been settled at Carrollton Station since 2008.

“Each time a bar would ‘consciously decouple’ from comedy, whoever cared enough would find a new one,” Henehan said. “For Carrollton Station, my old runnin’ buddy, Brian Bonhagen, was the one who took the initiative and met the former owner in February 2008.”

The show itself has evolved over time and, although Henehan is a co-host, he acknowledges that many people have made the show what it is today.

“When [Bonhagen] got busy with some other projects, Scotland Green and I picked up the baton and picked out the name ‘Think You’re Funny,’” he said. “My brother Cassidy came in town soon after and helped tune up our process, share hosting duties and all sorts of other help, especially once Scot left town; we needed someone who could talk to humans, and I’m still developing that skill.” 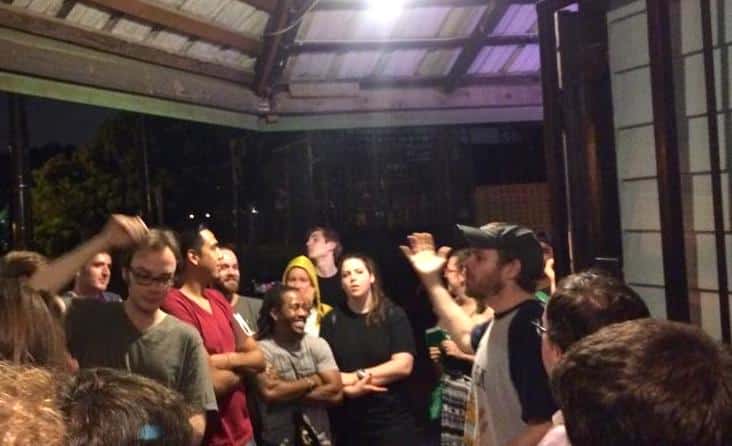 “Think You’re Funny” performers have a laugh outside Carrollton Station.

Henehan said that anyone is allowed to take the mic — no matter comedy skill level, as long as they come with a good attitude and a positive vibe. In order to make the show work, the event is a team effort and comics are expected to be supportive of each other,

“We do try to keep a great deal of openness  in the open microphone. That said, another mark we aim for at TYF is, ‘It works like an open mic, it feels like hanging out, but it plays like a showcase,’” he said. “So, those three things take a modicum of professionalism, respect and planning.”

He continued. “We don’t take ourselves too seriously, but to be sustainable for over a decade of weekly shows, we try to craft the show’s lineup order to maximize dynamics and diversity of style. We try to share as much information, as clearly as possible, to all of the performers gathered together, and encourage them to share with one another.”

Henehan explained that the secret to any successful open-mic is respect of the audience, the venue and other performers. While creativity on stage is encouraged, disrespect isn’t tolerated.

“If someone is routinely making audience members, bar guests, other performers or the bar management unhappy, on or off stage, that person will be asked not to sign up again,” he said. “If someone is seen by some as cringey or doesn’t always end up getting uproarious chuckles, but is attempting to somehow entertain, they are a friend. If they are there solely to be provocative or edgy, in a fashion only meant to confront, or to use the pretense of art or performance to pursue disrespectful or predatory social behavior — I don’t think anyone wants that sort of person there.”

Henehan, who lives in the Carrollon neighborhood, says that encouragement from neighbors and friends prompted him to get his team back together to restart the weekly tradition at Carrollton Station.

The first show back was July 7 and Henehan said it felt like no time had passed; he’s happy to welcome people back to something that has been important to so many.

“We’ve done one show back and it’s strangely like we never left,” he said. “Sign up opened at 8, we saw friends good and great, the same tables slid into the same spots, the show started shortly after 9, the one person at the second row table thought they were a lot quieter, sober and more relevant than they turned out to be. And I felt great on stage and nauseous off. I could have wept from the feelings of homecoming.”