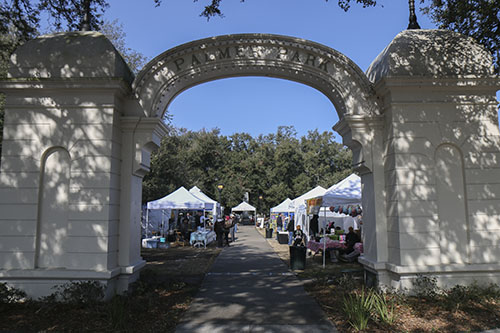 Palmer Park has been the longtime home of a popular art market.

The new name for the park, located where the Carrollton and Claiborne avenues meet, was chosen with input from community members, who eventually settled on “Marsalis Unity Park” at a meeting of multiple neighborhood associations early last month. “Marsalis Harmony Park” was the second most popular name discussed.

Palmer Park was named after the Rev. Benjamin Palmer, a prominent Confederate and vocal defender of slavery. The park’s new name honors the late renowned jazz musician and educator Ellis Marsalis, whose family still lives in the neighborhood.

The neighbors decided to honor Marsalis’ contributions to the city while also promoting unity, and harmony, as a positive gesture in a time of division.

District A Councilman Joe Giarrusso participated in the discussion at the neighborhood association meeting and sought the approval of the Marsalis family before bringing the new name to the City Council for a vote.

“I am thankful to the Carrollton residents who ran surveys, talked to neighbors, and attended public meetings about this change. And, I’m thankful for the Marsalis family for working with my office and suggesting ‘Harmony’ as a unifying idea. Honored to have had this opportunity,” Giarrusso said on Twitter after the vote.