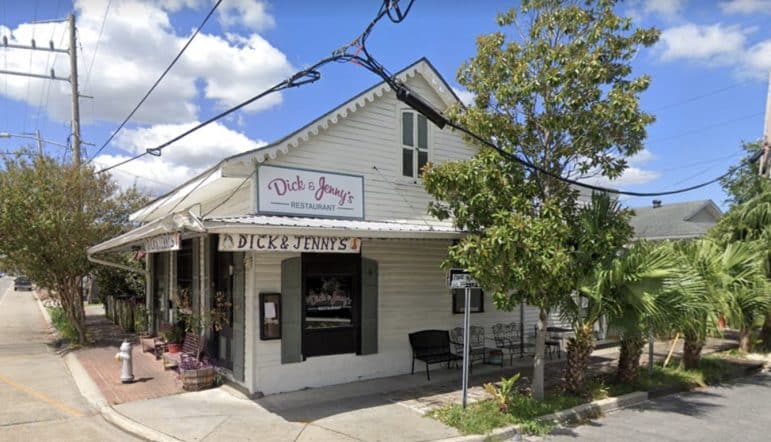 The casual, Louisiana-centric Dick & Jenny’s, a fixture on Tchoupitoulas Street, closed its doors in March 2020.

Mister Mao, a “tropical roadhouse” from chef Sophina Uong and husband/partner William “Wildcat” Greenwell, is set to open in the former Dick & Jenny’s spot on July 24.

“Wildcat and I are so excited to welcome our guests and let them experience first-hand everything I love about cooking – the ability to celebrate being together, experimenting with flavors and ingredients from around the world, and finally getting to savor it all,” Uong said.

Mister Mao will serve as Uong’s canvas, she said, a place where the Cambodian American chef will meld her expertise in collaborative cooking tradition from across the globe with her creative dissection of the Southern plate.

After fleeing with her family as a toddler from war-torn Cambodia and finding refuge in Long Beach, California, the self-taught chef grew up surrounded by families and friends of all backgrounds. She spent her time in kitchens, watching as mothers cooked traditional American suppers with delicious pot roast and abuelas made tortillas and stewed Mexican guisados.

Since then, Uong has worked in some of the San Francisco area’s most acclaimed restaurants. In 2016, Uong was named Food Network’s Chopped “Grill Master Napa Champion” and soon after was tapped to manage Andrew Zimmern’s Lucky Cricket restaurant in Minneapolis.

At Mister Mao, Uong will serve up a static menu of eclectic globally inspired cuisine, along with an ever-changing selection of small plates served from roving carts. The whimsical menu categories begin with Drinking Snacks — such as Deviled Almonds & Plantain Chaat, an aromatic Indian riff on bar nuts, and Banchan Mao, tiny bites of fruit pickles, lacto ferments of imperfect produce, dried shrimp mochi and more.

From there, diners can pick from Foods We Love to Share and those You Don’t Have to Share with untraditional takes on traditional dishes. Shareable plates include Escargot Wellingtons – snails en croute with preserved lemon, garlic butter, horseradish and powdered greens —and Alabama Corn Pudding — topped with Two Dog Farm tomatoes, cucumber, torpedo onions, sumac and pickled corn, along with a North African inspired herb jam.

These Bring Us Joy + Hellfire Heartburn section is not for the faint of heart. It includes spicy dishes such as Chilled Octopus Cocktail – habanero octopus aguachile, with cerveza jelly, summer pickles and avocado — and Pani Puri — Camellia red bean and potato masala stuffed into semolina puffs and finished tableside with fiery mint water.

Diners can indulge in sweet treats by Pastry Chef Sarah Cotton, who has worked at renowned spots including Restaurant August and Shaya in New Orleans. Cotton promises to put the Mister Mao’s signature sense of whimsy on each dessert with options including a Dark Chocolate Tart with malty peanut brittle, coconut cream, black garlic and crispy rice and the Lotus Blossom Cookies with crispy coconut, sesame seed and activated charcoal cookies.

Under the direction of co-owner Greenwell, the cocktail program at Naked Bill’s, Mister Mao’s bar, will be as playful and eclectic as the cuisine. Libations include Cathouse Spritz – a refreshing aperitif featuring Amaro Nonino, Campari and lime; Billion Dollar Betsy, a boozy riff on a piña colada with dark and overproof rum, allspice, pineapple and orgeat tres leches; and John’s Secret Dragon Lady – a tiki-style cocktail with a bit of sweetness and saltiness featuring Malort, Benedictine, velvet falernum, orange and saline. Guests can also enjoy an array of virgin cocktails and a small-production focused wine list curated by General Manager/Sommelier Roger Eyles formerly of Shaya, Meauxbar, and Sylvain, as well as local brews from Zony Mash Beer Project. 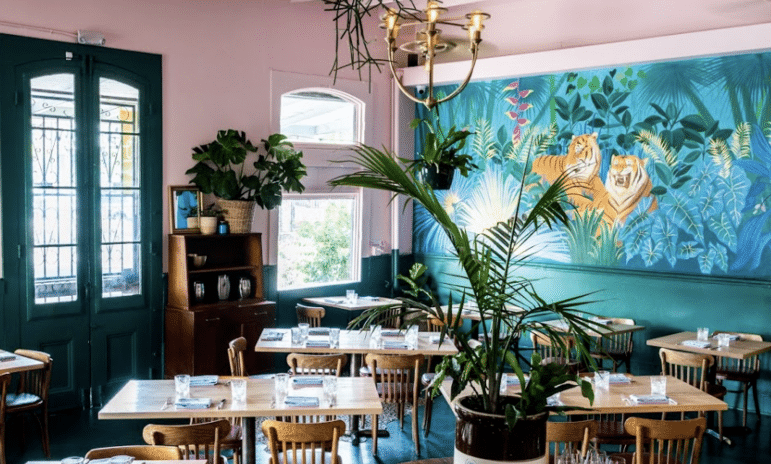 The dining room at Mr. Mao

Dick & Jenny’s closed in March 2020 after more than two decades at the spot. During that time, restaurant had changed hands several times, with new owners changing up the menu while keeping the name and the homey look and feel of the original Dick & Jenny’s.

The 1,400-square-feet restaurant and bar now has been transformed into what owners describe as a tropical roadhouse with funky décor and bright colors. Guests will enter through the Naked Bill’s bar on Jena Avenue, where they will find lounge and bar seating for 25. Uong and Greenwall envision it as a meet-up spot before a show at Tipitinas or a place to spend a girls’ night out or relaxed date night.

In the dining room, the Chef’s counter seating six provides up close and personal views of the open kitchen, while casual dining tables and chairs are strategically placed throughout the room. Pinks, blues and greens are complemented by tropical plants and a hand-painted mural by New Orleans artist Margie Tillman Ayres adds to the tropical jungle ambiance.

After Mister Mao opens to the public on Saturday, July 24, the restaurant will serve dinner Thursday through Monday from 5 to 10 p.m. It will be closed Tuesday and Wednesday.