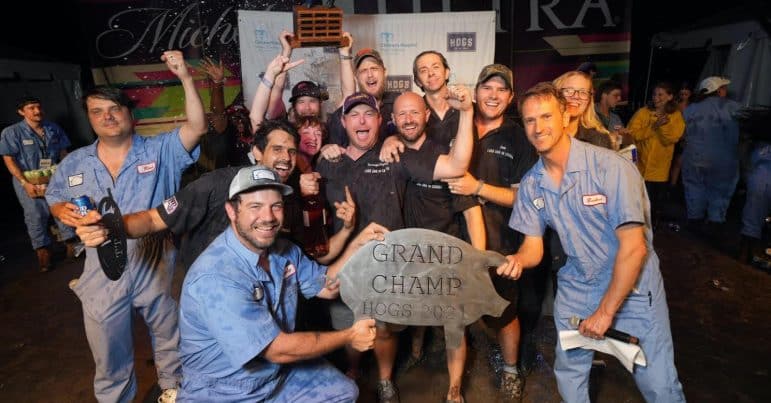 Courtesy of Lard and in Charge

The Lard and in Charge team shows off its top prize.

An Uptown team of amateur pitmasters was named the 2021 champion over the weekend at Hogs for the Cause.

The celebration of smoked meat returned to the festival scene at a new site in Belle Chasse. The barbecue and music festival hosted over 80 pork-punny teams from around the country along with musical acts like Anders Osborne and Old Crow Medicine Show.

The Grand Champs, Lard and in Charge, are a true Cinderella story.

In a field of teams consisting of 30 to 50 members, the Lards got it done with less than a dozen dedicated barbecue warriors.

‘The Lards were crowned Grand Champions over a field of teams that included renowned chefs like Tory McPhail and the some of the city’s top BBQ joints, such as Blue Oak BBQ and Crescent City BBQ.

While most teams have thousands of dollars in equipment and professional cook teams, the Lards were crowned Grand Champs with a team of three home BBQ cooks, two Camp Chef pellet smokers and some BBQ loving warriors.

“We like keeping our team small so we can have ultimate control over the quality of the product. Rob and Mike (the Lard cook team) do an excellent job, so we just watch them do their thing,” said Porcine Operations Officer Greg Stein, aka the team captain.

The Lards finished with a Top 10 sauce, Top 5 side dish and then jumped onstage to earn hardware for the No. 2 pulled pork, Porkpouri champs and overall Grand Champions. 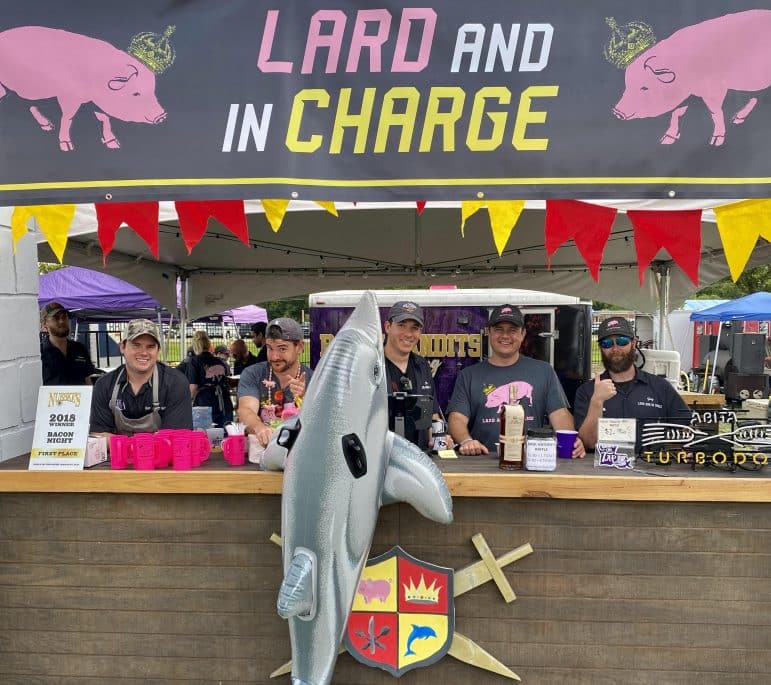 Courtesy of Lard and in Charge

A dolphin visits the team’s booth at the 2021 Hogs for the Cause.

The Lards are known for their castle facade, scary-cute 6-foot-tall papier-mâché Sir Pig and their award-winning cook team. Rob Huntley, the creator of the cult favorite, Herzinfarkt which won the 2018 Bacon Award, has been manning the grill since the team’s inception.

“There were some BBQ legends out here this weekend. I still can’t believe we won,” said team cook Michael Kleinpeter. “Rob and I just make food that we like to eat. I guess the judges liked it to.”

After all the awards and accolades, Lards officials said they are most proud of their fundraising total at the 2021 Hogs for the Cause.

The team has increased its fundraising every year it has competed at Hogs. This year, the team topped over $20,000 thanks in part to its victory at the first annual Hoggyshack Golf tournament.

Since 2008, Hogs for the Cause has been promoting the old Southern tradition of open-flame pig roasts while raising funds for children with pediatric brain cancer and their families. The two-day festival was canceled last year because of the pandemic.