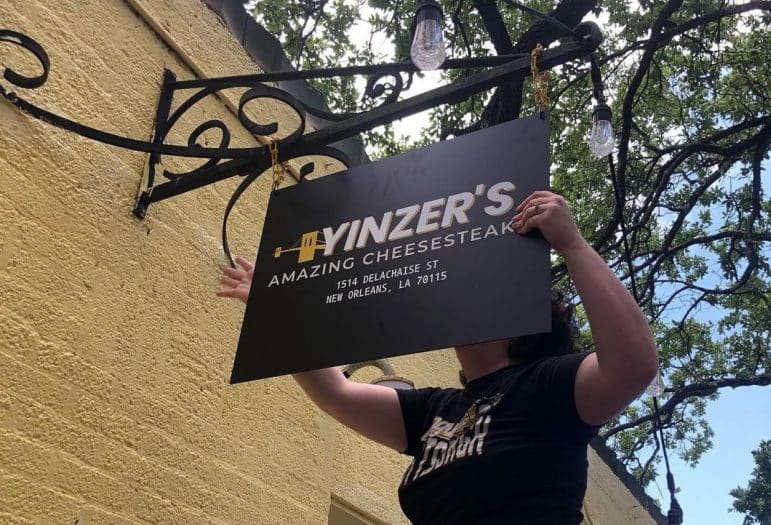 Co-owner and chef Colleen Ryan puts finishing touches on the cheesesteak restaurant on May 27.

After four-and-a-half years of pop-ups, Colleen Ryan and Michael Woodhull were ready to give their Yinzer’s Amazing Cheesesteaks a space of its own.

They opened the casual restaurant just over a month ago on Delachaise Street between St. Charles Avenue and Prytania Street. Although they began looking for a place before the pandemic, their new space fell into their laps when a former boss of Woodhull’s called to ask if they might be interested in the restaurant space he had for rent at 1514 Delachaise St. They were.

Vintage Garden Kitchens, known for healthy gourmet breakfasts and lunches, moved out of the space at the end of April.

“We signed the lease on May 2nd,” Woodhull said, “and by May 16, after painting and some touch ups, we opened to serve our first cheesesteaks.”

So who is Yinzer? “Yinzer” is a regional nickname, like “yat.” Natives of Pittsburgh, especially those with strong accents typical of the city, are referred to as yinzers.  The word comes from the Pittsburgh equivalent of “y’all”:  “yinz,” used as the plural of “you.”

Although cheesesteaks, often called “Philly cheesesteaks,” are associated with Philadelphia, they are found throughout Pennsylvania — including Pittsburgh, where Woodhull and Ryan hail from.

“There are regional differences across the state,” Woodhull said. There is one city where all the cheesesteaks come with pizza sauce. Other variations include peppers, onions and other types of sauces. And, of course, cheese. Melty cheese.

Yinzer’s has weekly specials that showcase some of these variations. For example, with added mushrooms, the aforementioned pizza sauce and even a pepper fajita cheesesteak. They also offer a version for vegetarians. 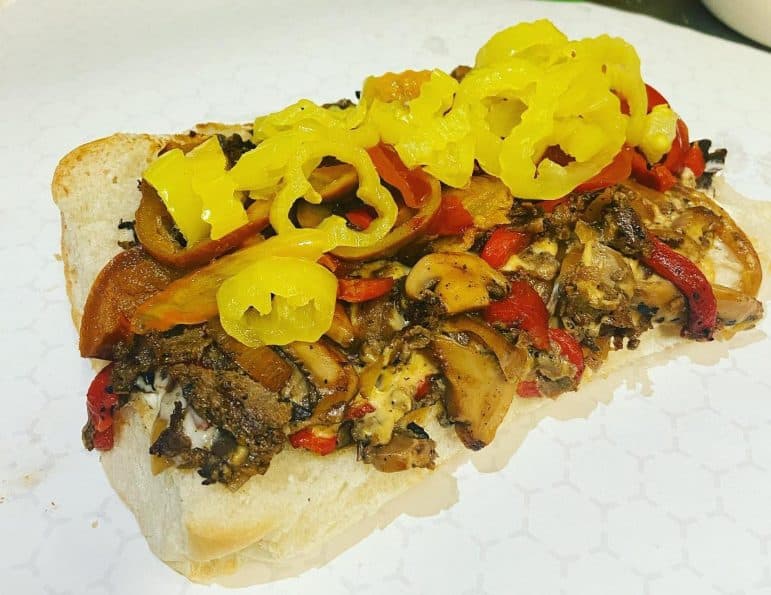 A cheesesteak topped with banana peppers.

Ryan does all the cooking, and in fact when she couldn’t source exactly the pretzels she wanted, she decided to make them herself. “Store-bought pretzels just do not compare to homemade,” she said.

“We did so many types of food during our years of pop-ups, mainly at Aline Street Beer Garden and the Rendezvous Tavern on Magazine Street,” she said.  “I even did Hungarian dishes and other Eastern European cuisine, but we were both happy that we settled on cheesesteaks as our specialty.”

And have they had any supply chain as a result of the pandemic? “Yes,” said Woodhull emphatically. “Peppers! We are not able to get enough of the peppers we need.”

Once they are able to add staff, Yinzer’s expects to be open more days of the week and more hours. Right now it is just the two of them doing it all. They are currently closed Tuesdays and Wednesdays and, for now, only open for dinner.

In addition to both indoor and outdoor dining, Yinzer’s has a unique delivery service. They have partnered with five different bars that do not serve food, where customers can order from them with no delivery fee. Patrons at the Milan Lounge, the Rendezvous Tavern, the Mayfair Lounge, the Beaded Oak or Verret’s Bar and Lounge can order what they want from Yinzer’s and have their dinner delivered to them at the bar.

Another service the duo at Yinzer’s is planning: to have a community fridge outside their restaurant. New Orleans Community Fridges provides a network for neighbors to support each other by offering free food. Inspired by similar programs in New York City and Los Angeles, the New Orleans Community Fridges are set up so people can drop food off, and those who need it can help themselves to food that has been stored safely under refrigeration. 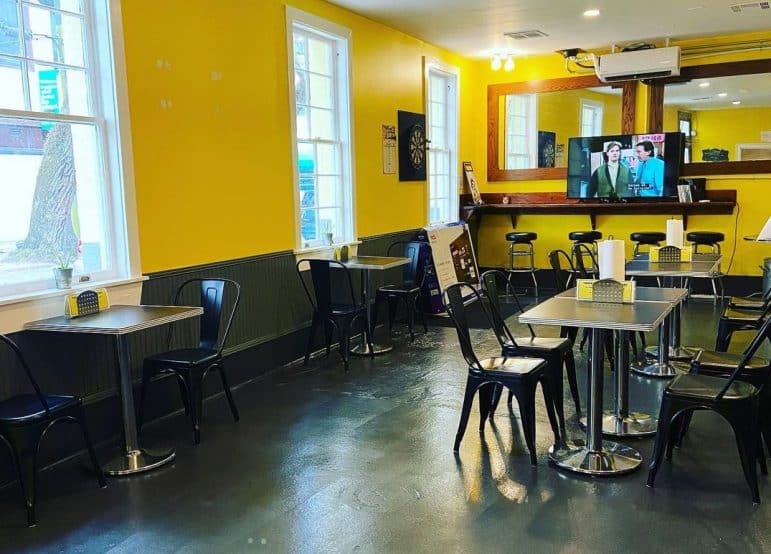 Yinzer’s has “Jeopardy” nights and a gaming set-up.

And for gaming  enthusiasts, there is an Xbox set up with “Mortal Kombat” and other games. “Jeopardy” fans can catch that show at 6 p.m. on Mondays, Thursdays and Fridays.

“Now with a space of our own,” Woodhull said, “we can concentrate on the best possible menu for our customers.”

Ryan agreed: “Yes, for sure. And cheesesteaks really are amazing, and now the people who live in or visit New Orleans can enjoy an iconic, authentic Pennsylvania specialty, just steps off St. Charles Avenue.”

Yinzer’s is open Thursday through Monday from 5 to 10 p.m.