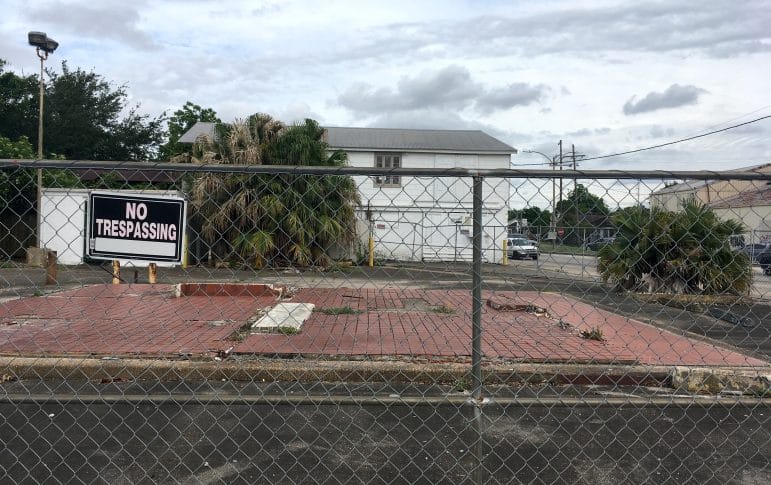 A 20-unit apartment building is planned for Earhart and Monroe. The building in the background will be renovated for housing.

When Paul Irons and his sister Marseah were growing up, they regularly passed the corner of Monroe Street and Earhart Boulevard a block and a half from their Hollygrove home.

At last week’s City Council meeting, Irons and Marseah Delatte, managing partners with New Orleans Restoration Properties, saw the council members give unanimous approval to their plan to develop the now-blighted square block — including the cement slab where the Church’s used to be — into affordable housing.

The one- and two-bedroom units will be rented to people earning from 20% to 80% of the area’s median income, or from about $11,000 to $43,000 annually for a two-person household. The site also will include 43 off-street parking spots plus a community center and open greenspace in the middle of the square-block property. 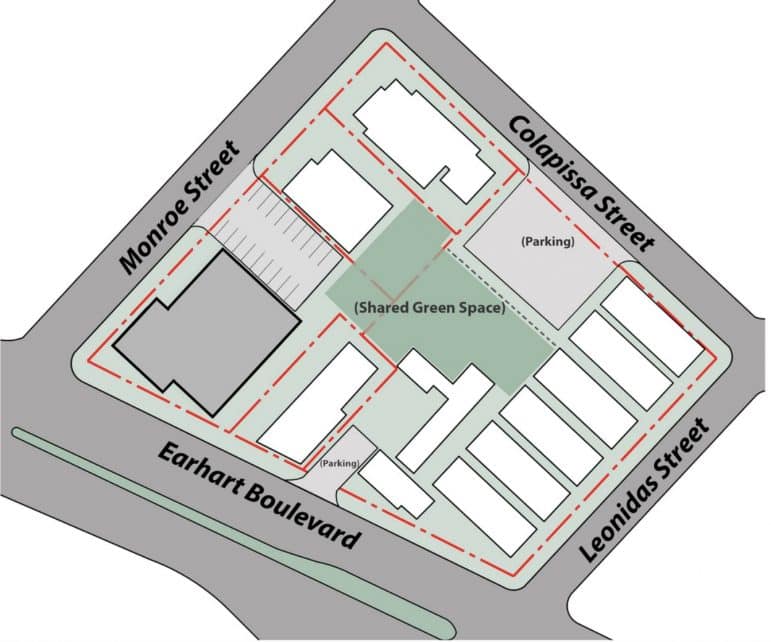 Grove Place preliminary site plan. The parking spaces on Earhart have been relocated, per a city proviso, to avoid cars backing out onto the busy thoroughfare.

District A Councilman Joe Giarrusso called this development, along with the Catalyst Brewery and Restaurant the council also approved on Thursday (June 17), “a big shot in the arm for Hollygrove.”

Some of the properties are zoned for one- and two-family residential use only, while Earhart is zoned for commercial use. The council on Thursday granted the owners — a group made up of Joseph Macaluso Realty Co., Laurence J. Macaluso Family LLC and Florence M. Baker — a use exception to allow for multi-family housing.

Speaking to council members, developer Delatte said, “This is going to change the trajectory of the neighborhood.”

The City Council enacted legislation in 2019 that loosened zoning restrictions for developers who build affordable units, easing the way for developments like Grove Place.

“This is really achieving the purpose of that affordable housing plan development tool by creating a significant public benefit through affordable housing units located near transit near employment opportunities,” said city planner Stephen Kroll, explaining to the council why the City Planning Commission backed the development.

Giarrusso noted that the developers changed their original plan to allow for 100%  affordable housing and for more community engagement and City Council oversight.  “These things don’t happen overnight,” Giarrusso said. “We’ve all spent many hours working on a community-driven, neighborhood-appropriate, affordable housing development.”

Rents at Grove Place will range from about $300 to $800, developers have said. Fair market rents for one- and two-bedroom apartments in the 70118 ZIP code, which includes the Carrollton and Audubon areas as well as Hollygrove, run closer to $1,000 and $1,200, according to Housing Authority of New Orleans.

Hollygrove and Dixon were the only Uptown neighborhoods classified by HousingNOLA as having affordable rent and home prices in 2020.

Earl Williams of the Hollygrove Neighbors Association told the City Council that Grove Place has widespread support in the community. “This is a project of, by and for Hollygrove,” Williams said.

Although no one spoke against the project at the City Planning Commission or City Council hearings, some neighbors have voiced concern over putting a three-story 20-unit apartment building in a neighborhood made up of single-family homes and doubles.

More than 300 people signed a petition stating they oppose multi-family buildings beyond doubles in the area, saying the mass and intensity is not appropriate for an area dominated by single-family homes.

Hollygrove resident Felicia Poree also said in an emailed comment to the Planning Commission: “Apartment housing by nature has transient residents with no vested interest in the neighborhood. However, home ownership brings people out of poverty, stabilizes a neighborhood and builds community among the neighbors.”

The apartment building will be on the same lot that held, until it was torn down in 2018, the Church’s Chicken, Irons said, and fast-food restaurants attract hundreds of transient visitors every day. “These are people without any vested interest in the neighborhood,” Irons said of the fast-food patrons. “The tenants will want to maintain their tenancy. They will make a contribution.”

He said they are open to turning the apartments into condominiums, but that can’t happen anytime soon. Federal tax credits and the city’s affordable housing ordinance require the below-market rents to stay in place for decades, some for as long as 99 years.

Another petition was circulated to neighbors in support of the project, saying it could return Hollygrove to its pre-Katrina vibrancy. More than 200 people signed that one, but some of the same signatures can be found on both petitions.

The developers, backed by the city planners, defend the 42-foot three-story building on Earhart and Monroe, saying the size and mass, while too large for most Hollygrove streets, is appropriate for Earhart and that the use is less intensive than the restaurant.

Even the project’s detractors say they are pleased the bleak and blighted square block will come to life again.

Developers will rehabilitate six Craftsman doubles along Leonidas Street, and two homes on Monroe will be renovated as triplexes. Two additional doubles along Earhart Boulevard will be restored for housing, and another will become a community center with space available to the entire neighborhood.

In a statement Giarrusso read to City Council members Thursday, Ruth Kennedy, the 83-year-old president of the Hollygrove Neighbors Association, expressed her support for the project. “I’m sick and tired of looking at that square. I have to pass it coming and going to my immediate block,” she stated.

Irons told Uptown Messenger they plan to start construction by the end of the year, most likely in November, and to begin moving tenants into the doubles along Leonidas Street in May 2022. Other buildings will be phased in as construction is competed.

The project takes Irons and Delatte back to their roots. Their grandfather was a founding developer and investor in Hollygrove, according to the New Orleans Restoration Properties website, starting by building on lots he bought in one square block. 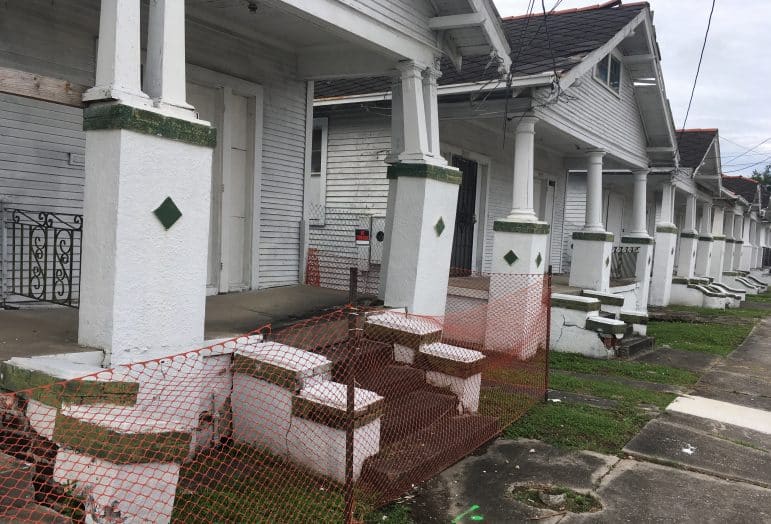 A row of six Craftsman doubles on Leonidas will be renovated into one-bedroom apartments.