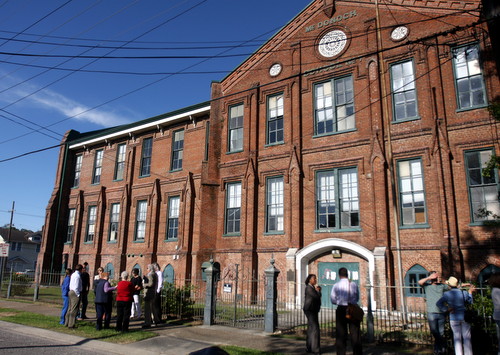 The McDonogh 7 building at 1111 Milan St., photographed in 2013, was part of a 2019 land swap between the School Board and the Housing Authority.

A proposal from the Housing Authority of New Orleans to turn the former McDonogh 7 school building into affordable housing drew intense interest from neighbors as more than 50 people attended an online community meeting on Friday (June 18).

Representatives from HANO and the architecture firm VergesRome laid out plans for the Uptown site, which currently houses the upper grades of Audubon Charter School.

The three-story school building would be turned into 27 affordable housing units for seniors, while the rest of the site would house 12 more units in the form of family duplexes. There would be 41 parking spaces in total, and 20% of the site would be green space.

If all goes according to plan, the Housing Authority aims for City Council approval in December or January and would start construction in the fall of 2022 or spring of 2023. The work would take about a year to complete.

Tiffany Delcour, chief operating officer of NOLA Public Schools, clarified that Audubon already had plans to leave the building and find a larger school site. “This is not going to be forcing this school out of the building. We have been working with Audubon School for the past two years,” she said.

In a controversial 2019 land swap, HANO turned over eight acres of land on the former B.W. Cooper development to the Orleans Parish School Board in exchange for three OPSB properties — including the former McDonogh 7 building on Milan. The swap gave Booker Washington High School space for a football field and gave HANO space for affordable housing.

Neighbors flooded the virtual chat with questions and comments. Several were concerned about potential traffic and whether the proposed development will bring in too many people and disrupt the neighborhood.

“It’s a tax on the neighborhood, which has hundreds of potholes in the streets which cannot be repaired, and now you want to approve yet more traffic, upset the character of a historic neighborhood all of which will diminish property values,” wrote Scott R. Bickford, who lives near the proposed project, in a public comment.

Representatives from HANO at the meeting promised that their plans would preserve the historic building and stay in line with the character of the neighborhood.

There were also several questions about how management would be chosen, who would be considered low income, and how occupants would be vetted and screened. One person asked what the “ethnic diversity” of the housing complex would be, which representatives from HANO said they could not comment on.

Cashauna Hill, executive director of the Louisiana Fair Housing Action Center, wrote in the chat: “It’s interesting how many of these comments and questions are far beyond the bounds of HANO’s role in getting this development built. I’m also unsure why there are so many questions about security and tenant screening, and it is very concerning from a civil rights/legal perspective.”

Another commenter in the chat, Jack James, wrote back, “The questions regarding security and screening are because the occupants are not stakeholders in the community, i.e., they do not own the property.”

Andreanecia Morris, executive director of HousingNOLA, responded in the chat that “renters ARE stakeholders” and “make up the majority of the people who live in New Orleans.” Census data shows that in 2000, about 48% of New Orleanians were living in a home they owned. 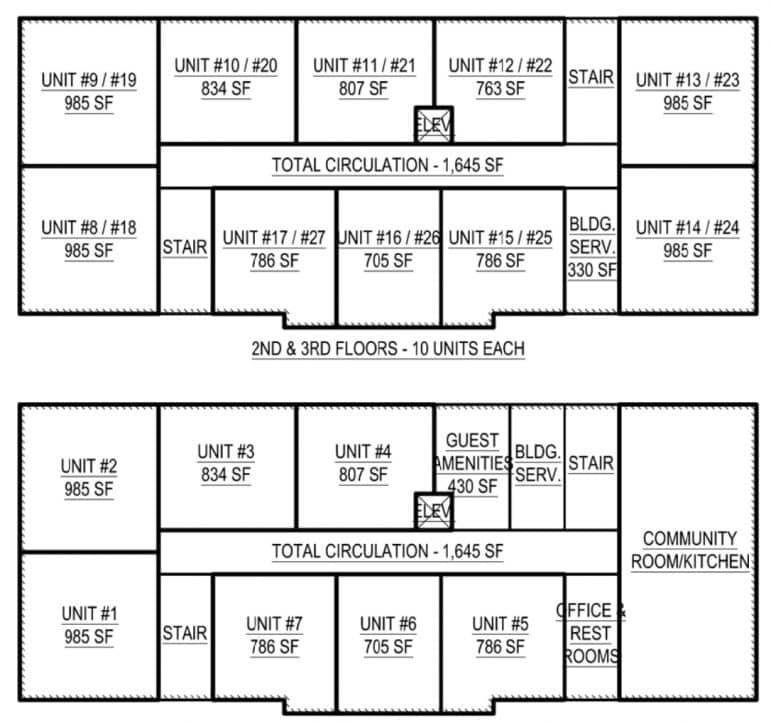 The plan for senior housing in the former McDonogh 7 building, with seven units on the first floor and 20 on the second and third.

Michael Mancuso, vice president of Touro-Bouligny Neighborhood Association, said he wasn’t surprised to see so much engagement from the public over this proposal.

“The school’s been there for 140-plus years and it’s a big piece of property, so any change, regardless of the topic is a big issue,” he told Uptown Messenger.

“It’s a large part of the neighborhood and the history. It’s a matter of concern because it literally, physically touches on a lot of folks and their houses.”

Two years ago, the neighborhood association sued the Orleans Parish School Board over the issue of what to do with the McDonogh 7 building after the HANO land swap was proposed. The Touro-Bouligny Neighborhood Association stated in its suit that the School Board had not done enough to check whether other charter schools were interested in the school building before it was declared “surplus.”

Mancuso said the housing association has not taken an official stance on whether they approve of this current project or not. “We have to give it some thought. We want to make sure we’re engaging in this in a serious and responsible manner,” Mancuso said.

Ideally, he would love to have the school stay a school. But if that’s not possible, “we’d like to make sure that the historic building is preserved. It’s a beautiful building and whenever it’s reused or redeveloped, we would love to see the building preserved.”

Orleans Parish School Board member Carlos Zervigon, District 6, who was at the Friday meeting, told Uptown Messenger that he enthusiastically supports the plan.

The 19th century school building is far too small for a modern school, he said. And he knows the school well, as a former board chair for Audubon who sent one of his own children to school at the Milan Street location.

“The idea of keeping it a school is just not realistic. It’s absolutely right for the Orleans Parish School Board to deem it as surplus property,” Zervigon said.

District 5 School Board member Katherine Baudouin was circumspect. “I’m glad to see that there is more opportunity for community input than there was the last time this came up,” she said. “However, I would like to see more of the neighborhood’s questions answered before I can decide whether it is a good project or not.”

HANO representatives said they would post a recording of the meeting and answers to the questions on hano.org by Wednesday (June 23). There will be another community meeting online at 5 p.m. on June 30. Neighbors can submit comments and questions to info@vergesrome.com.