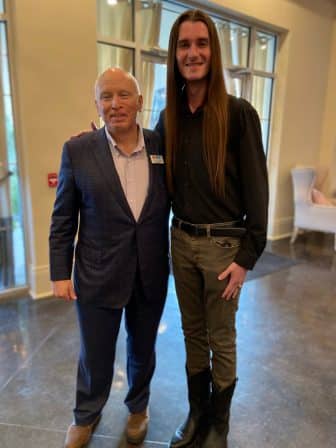 Scott Presler is on a mission to convince Republican voters that they must take personal responsibility for their party and America’s future. “You can make a difference. I dare you to say,  ‘I will!’” Presley issued the challenge to an enthusiastic audience of 100 plus Republicans, including former congressional candidate Claston Bernard, Wednesday (May 5), the night before President Joe Biden’s visit to New Orleans, at The Cannery in Mid-City.

A Navy brat and former dog walker who has become the darling of conservative Republicans around the country, Presler is in New Orleans on a three-day tour to build party leadership, raise money, and rally grassroots support for litter clean-up and other community campaigns.  An honors graduate of George Mason University, Presler is a successful activist with 806,000 followers on Twitter under his hashtag #ThePersistence.

“It’s our Republican Party, not theirs. I’m coming for you in 2022 peacefully,” he continued. Presler has already visited 25 states this year, registering voters and campaigning for Republican candidates, including Susan Wright who just made the runoff for an open congressional seat in Texas.  He is conducting a letter-writing campaign to support Arkansas gubernatorial candidate Sarah Huckabee Sanders, the former White House press secretary.

The recipient of the coveted Ronald Reagan Freedom Award from the Conservative Political Action Conference in February, Presler delivers a concise, conversational message on electing “America-first patriots.” His mission is to reclaim the spirit of America one city at a time.

Presler said he “fully supports” the proposed ousting of Wyoming Congresswoman Liz Cheney from Republican leadership over Cheney’s anti-Trump statements. Cheney, one of several Republican members of Congress who voted to impeach President Trump, stated in a Washington Post column that the GOP must pick true conservative values over Trump’s dangerous and anti-democratic cult of personality. Presler would prefer Congresswoman Elise Stefanik, a staunch Trump supporter.

“History is watching. Our children are watching. We must be brave enough to defend the basic principles that underpin and protect our freedom and our democratic process. I am committed to doing that, no matter what the short-term political consequences might be,” Cheney wrote.

Presler also believes that Democrats should prioritize what he calls “3.6 million Black kids in poverty” ahead of “illegal aliens.” President Biden raised the limit on the number of migrants who will be able to enter the United States in 2021.

Breezing through a slick PowerPoint presentation, Presler seamlessly referenced all the current hot-button conservative issues, such as restricting women’s sports to biological women, Second Amendment sanctuary cities, defunding the government and balancing the federal budget. “Fair trade, not free trade. Stop giving money to countries that hate our guts. Invest in us, in our infrastructure. That’s what America First is all about,” Presler said.

He urged attendees to run for office at the state and local level. “They (Democrats) control the mayors, city councils and even some sheriffs who enforce the laws. If we elect out people, the Democrats can never, ever shut us down again,” Presler said.

Presler then touched on ballot harvesting and election integrity reform as the path forward. “2023 is our year in Louisiana,” he exclaimed in reference to the next election for governor. Presler supports banning electronic voting by mandating “paper ballots for paper trails” and “punctually” removing people from the voting rolls whenever they change addresses.

Presler pointed to a small number of “squishy” nationally prominent Democrats whose re-election he hopes to threaten by making them feel uncomfortable. He gleefully keeps a running list of Democratic members of Congress who will be retiring in 2022, including Ann Kirkpatrick of Arizona, Filemon Vela of Texas and Cheri Bustos of Illinois. “Each of these districts is flippable,” Presler said.

Other political goals include re-electing Florida Gov. Ron DeSantis, replacing Georgia Gov. Brian Kemp, electing a conservative governor in Arizona and flipping the governorships of Michigan, Pennsylvania and Wisconsin, as well as Louisiana, from Democrat to Republican.

He also urged attendees to share their personal stories in an authentic way by being true to themselves, like Donald Trump and Bernie Sanders did in their presidential campaigns. Presler said he became a community organizer in response to the work being done by President Obama. Presler said he realized he, too, should become more engaged to help his country.

In cooperation with Avondale, Louisiana’s One Accord Ministries, Presler led a cleanup effort along North Claiborne Avenue today which included community outreach and lunch with neighbors afterwards. A summit of local activists was also planned.

In 2019 President Donald Trump inspired Presler to start cleaning up America after Trump commented on the condition of Baltimore. Presler has been part of collaborative litter abatement activities in Austin, Atlanta, Chicago, Houston, Denver and many other cities.

He’ll wrap up his New Orleans trip Saturday night with a fundraising dinner at a private French Quarter home. “We are so excited to host Scott Presler for his first visit to New Orleans. He has an important message that many New Orleans voters need to hear,” said event organizer Juliet Laughlin.