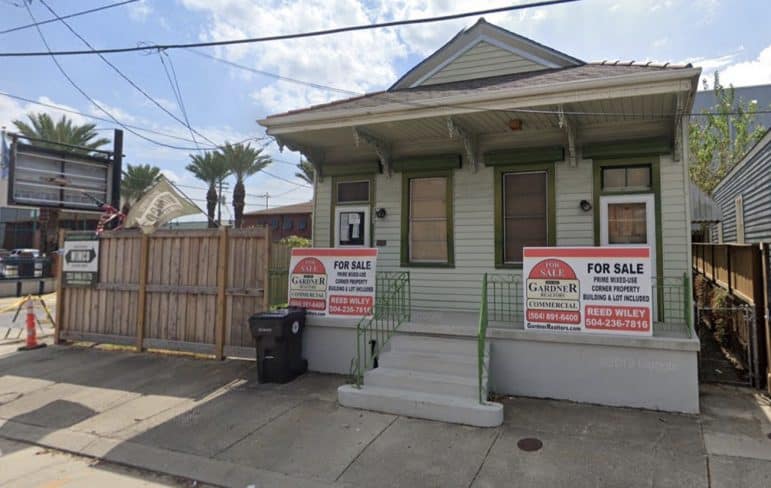 A co-owner of Bayou Beer Garden and Bayou Wine Garden wants to open a new bar in Uptown on Tchoupitoulas Street – but first he will have to face the objections of neighbors who say they don’t want to turn their street into an entertainment district.

Dubbed Riverside Bistro and Beer Garden, the proposed establishment would be located at 4842 Tchoupitoulas, across the street from F&M Patio Bar and down the block from Grit’s Bar on Lyons Street.

At a virtual neighborhood meeting on Monday, local residents raised their concerns that a third bar in the area would lead to too many issues with parking, noise and late-night revelers getting into traffic accidents on the busy street.

“The first person that lies in front of my house drunk and passed out in 1 in the morning, you’re gonna hear from me,” said Donna Williams, a nearby resident.

Kami Galeana, another neighbor, said she was worried about how late hours on a school night would affect her 6-year-old child. “It turns that whole area into an entertainment district. It’s going to drag our quality of life down,” she said.

David Demarest, one of the proprietors of the proposed business, made the case at the meeting that they would make good neighbors.

He described the proposed business as a casual neighborhood restaurant and bar, very much in the vein of the Bayou Beer Garden and Wine Garden in Mid-City. There would be indoor seating as well as a covered courtyard and backyard dining, and a fence around the property.

To address neighbors’ concerns, there would be full-time monitored security cameras, regular cleaning of the property and nearby buildings to avoid trash build-up, and a valet service. Valets could serve customers of other bars and businesses in the area, too, further reducing parking problems.

However, these promises did not do much to assuage the concerns of the neighbors who attended the meeting.

“We don’t want a bar,” said resident David Trocquet, “and there’s nothing you can do to change our minds.”

“Why does it have to be a bar? Why can’t it be a restaurant that serves alcohol?” Galeana asked.

Demarest told Uptown Messenger that the investor, local attorney Jonathan Rhodes, did originally envision a restaurant in this location, but then COVID-19 changed everything.

“We run a restaurant — and it’s a very, very difficult thing to do in a pandemic,” he said. “A bar allows you more flexibility with hours and seating.”

Caroline Good, president of the Bouligny Improvement Association, said that the association had voted to oppose the bar based on feedback from neighbors.

“Even though we appreciate the meetings and the good-faith effort to try to create the best possible situation, this bar would not serve our neighborhood,” she said.

Even with efforts to improve security and traffic, she said, there would be issues from the sheer number of drinking establishments on one street.

“I wouldn’t want to live with three bars in a one-block area,” she said.

Demarest said that he was in talks with Councilmen Jay Banks and Joseph Giarrusso about how to best move forward.

“If we felt like we were doing something harmful to the neighborhood based on the feedback that we were getting, we would pull out of the project,” he said.

For the bar to move forward, the City Planning Commission must hold a public hearing and then the City Council must approve the plans. Demarest estimated construction could start in six months.

He said although he “didn’t expect at this point to have this much opposition,” he felt that he was able to “maintain really good-neighbor relationships” for his Mid-City bars, and would be able to do the same here.

Demarest is a part owner of restaurant and butcher shop Piece of Meat and The Holy Ground Irish Pub, both in Mid-City, in addition to Bayou Beer Garden and Bayou Wine Garden.

“Compromise is the key to getting a project done,” he said. “Our intention is to make it work for everyone there.”