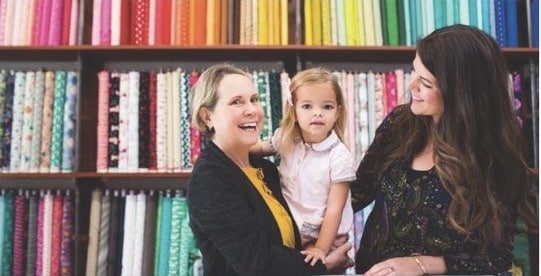 Chateau Sew & Sew Fabric & Sewing Studio on Magazine Street seems like an anachronism in the time when the number of people who sew (sewists as they are now called) is declining. But the folks at Chateau Sew have a plan.

It was started in 2015 by the mother-daughter team of Susan Jackson, a quilter, and her daughter Karen Flournoy, who mostly made garments. When Flournoy’s son was about to start school full-time, her mother suggested that, because she loves fabrics and had made clothes for her young son, they open a shop.

“In 2014, I went to work on a business plan, researching how to source fabrics. So it took us almost a year before we opened our doors,” Flournoy said. “Originally we had a smaller place on St. Mary Street, but I really wanted a Magazine Street location to capture both locals and visitors.”

She calls it a real family business because her father, John Jackson, does the accounting, keeping the finances on track.

Flournoy saw the “for rent” sign at 2103 Magazine while on a coffee run and called the owner right away. “We had outgrown our space, and this was the Magazine Street presence I wanted,” she said.

As it turned out, the move paid off. Jackson and Flournoy estimate that before the pandemic, 50% of their business was from out-of-town visitors, who were seeking textiles different from what they can find where they live.

When Chateau Sew shut down in March 2020, they assembled crafting kits and other creative ideas that could be mailed to people to work on at home. And now nearly half of their business is online, up from 20% to 25% before the pandemic.

And then, with the shortage of personal protective equipment, things took off with people buying fabric to make masks, gowns and scrub caps for health care workers.

Chateau Sew carries a lot of 100% cotton fabric, which was recommended by the Centers for Disease Control for homemade masks. They also had plenty of elastic, which was in very short supply once the crisis hit.

“Our customers made masks and donated them to us to distribute,” Flournoy said. “Each time a postal carrier or delivery person came, we gave them a mask.

The mask business also helped them hold on to their employees. “We were contracted by a third party to make 1,000 masks for the NOPD, ” Flournoy said. “Our employees worked at home making masks to sell, which is how I was able to make payroll.”

Chateau Sew also made fabric available at a discount for groups that were making masks to give away. One such group was Masked Ladies Nola, headed by Uptown resident Michelle Kaufman. Her group of eight each sewed individually at home and Kaufman handled the orders, pickup and delivery. “I think we must have made 4,000 masks,” she said.

Chateau Sew used to rely on travelers as well as locals; now their business is primarily local. Flournoy described their clientele as “a mix of quilters, people sewing for their children, as well as for themselves and other adults.”

One regular customer is Blythe Craft, a “needle artist” who makes clothes for children and adults as well as for local theatre productions. 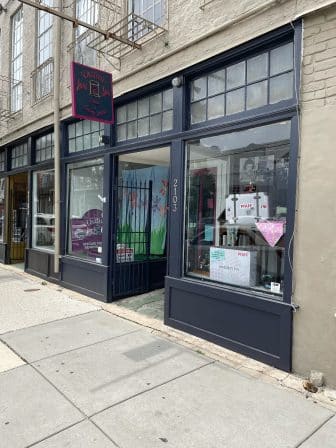 “I love having this store on Magazine Street,” Craft exclaimed. “I can walk there and to me, that’s important.” She has a 7-year-old daughter, Matilda, who is also beginning to sew.

The first Christmas that Chateau Sew was open, when Matilda was a baby, her father bought her a fabric panel to make stuffed animals. Now she is old enough to tackle that herself. “I take Matilda there because not only do they have wonderful fabric, but it’s a friendly place and it gets the creativity and new ideas going,” Craft said.

Future plans include cultivating the next generation of sewists with children’s classes, sewing camps and after-school lessons.

The original vision for the business included the community aspect, having a gathering place for those who sew. Before the lockdown, they hosted sewing circles for people on Saturdays to work on their own projects.

The pandemic also caused interruptions in the supply chains, with warehouses shuttered and shipping from most places also moving slowly.

In fact, there was such as shortage of sewing machines that Chateau Sew sold off the machines used for their classes to people who were desperate to buy one.

“Of course as things open up, I am so excited to have our old friends back, and new customers come to our shop,” said Susan Jackson.

“One thing I can say is that the pandemic has made people, who sewed as a hobby but hadn’t done it for a while, take it up again,” Flournoy said. “Also those new to sewing decided to learn as a way to do something creative that produces something you can use.”