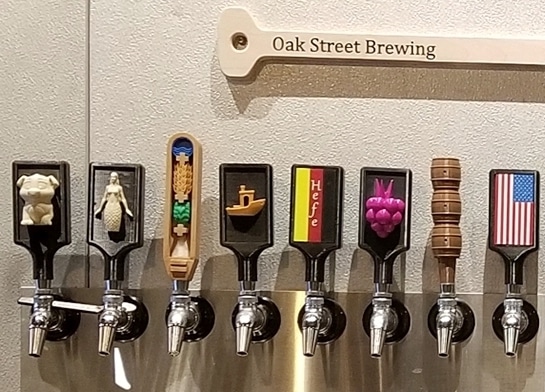 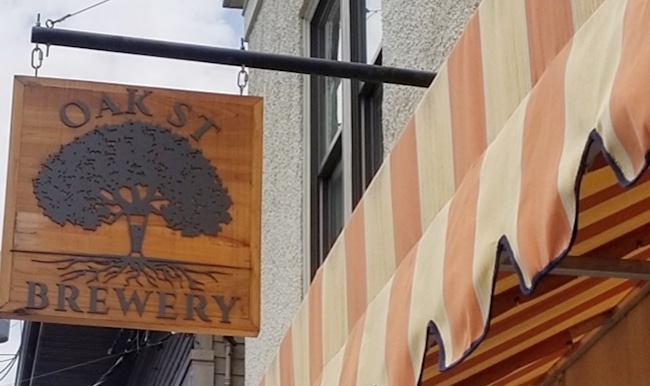 Kevin Greenaae’s love of beer and brewing is obvious. When I met him at his new brewery, Oak St Brewery, 8201 Oak St., he regaled me with the story about how he found himself in New Orleans brewing beer in the middle of a pandemic.

Greenaae hails from the Midwest and spent the past 28 years working in the maritime industry. He and his wife, Dana Fos, were living and working in Seattle when Fos, a New Orleans native, told Greenaae she was ready to move back home to New Orleans.

Greenaae, who has been brewing beer for 30 years, thought that now was as good a time as any to retire and focus on his passion for brewing.

“I was 50 years old and I retired,” Greenaae said. “My brother Greg and I moved here and decided to work on opening a brewery and tap room.”

The journey wasn’t an easy one. Not long after Greenaae moved to New Orleans and found the Oak Street location to house their new venture, Covid-19 hit.

Paired with the malware attack on the city’s computer system, the original opening timeline was delayed.

“It took time for us to get permits, due to the cyber attack on the city of New Orleans,” he said. “Then construction slowed down because, due to Covid, people didn’t want to work in such close quarters.” 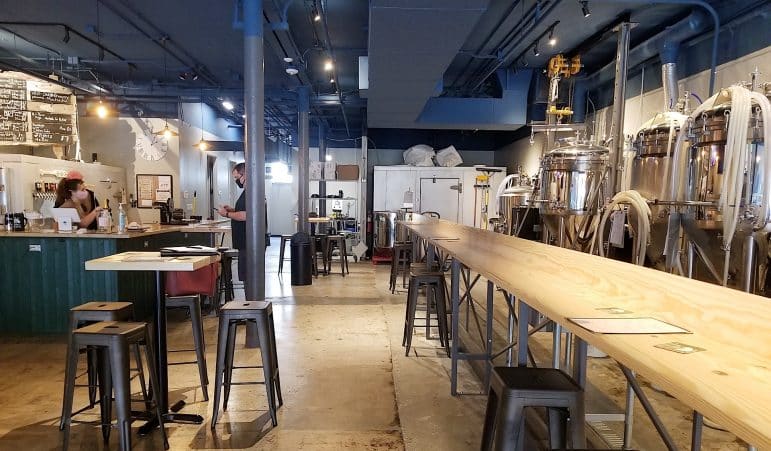 In August 2020, sit-down service was barred. So Greenaae and his team brewed beer and sold it in sealed containers, or crowlers, from the front door of the brewery.

“I had a table set up and would take orders and just fill crowlers and run them to the door. We did that for six weeks,” he said. “Then a few weeks later, go-cups were allowed, so we were filling those and running them to the door.”

On Oct. 21, the team was finally allowed to let people into their tap room — but a spike in Covid numbers shut everything down again on Dec. 28.

“We were back to square one,” Greenaae said. “Once again, we were limited to filling crowlers.”

New Orleans bars took another hit during Carnival, when Mayor LaToya Cantrell shut all bars down in an effort to limit Mardi Gras gatherings.

“We were relieved when bars and breweries were allowed to let people in, at 25% capacity, on the Friday after Ash Wednesday,” Greenaae said. “Even though we weren’t allowed to have customers inside during all of these shutdowns, the bills were still coming due.” 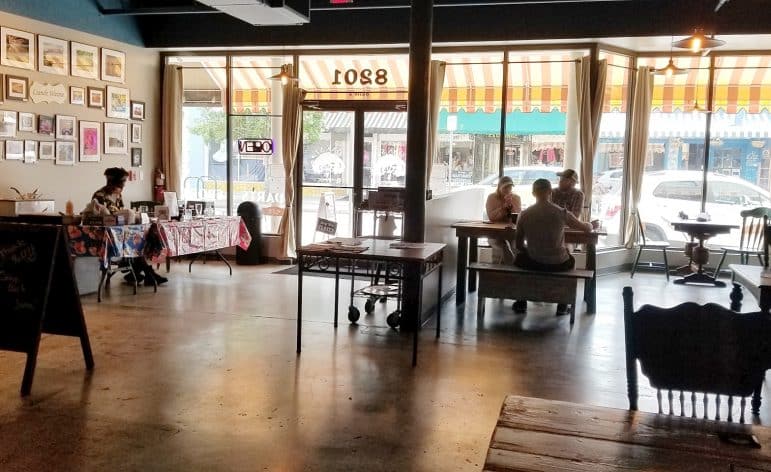 “We want to be a neighborhood place where everyone will feel welcome,” co-owner Kevin Greenaae said.

Now that the city is easing restrictions, Greenaae can begin to realize his vision of having an all-inclusive space where kids and dogs are allowed, games can be played and good times can be had.

“We want to be a neighborhood place where everyone will feel welcome,” Greenaae said. “We noticed that on Sundays, Oak Street is pretty limited, food wise. So we have a food pop-up so that people can come and have a beer and get something to eat. We’ve also hosted food trucks.”

Greenaae also told me a bit about the brewing system he uses; the BrewHa BIAC system contains the entire process of brewing — including mashing, boiling and fermenting — in one system.

In addition to the BrewHa BIAC system, Greenaae has a few other tricks up his sleeve. The brewery has a Zamboozy machine that makes frozen beers that are fluffy and carbonated, with almost a milkshake consistency. The frozen beers offered are made from the brewery’s own Mochachu Coffee Imperial Stout and Breezy Shorts Scotch Ale. The brewery also offers house hard seltzer in two flavors: black raspberry and mango.

“We wanted to include the hard seltzer, so that people with gluten intolerance can come in and enjoy something good, too,” Greenaae said. “The hard seltzers are good without being overly sweet.”

Oak St Brewery also makes its own root beer and Italian sodas in house, which is a great treat for kids or anyone who wants to have a good time, minus the alcohol. The brewery even offers some dog treats for four-legged visitors.

Greenaae explained, “That all goes back to being a family-friendly place. We want everyone to be able to come in and enjoy themselves.” 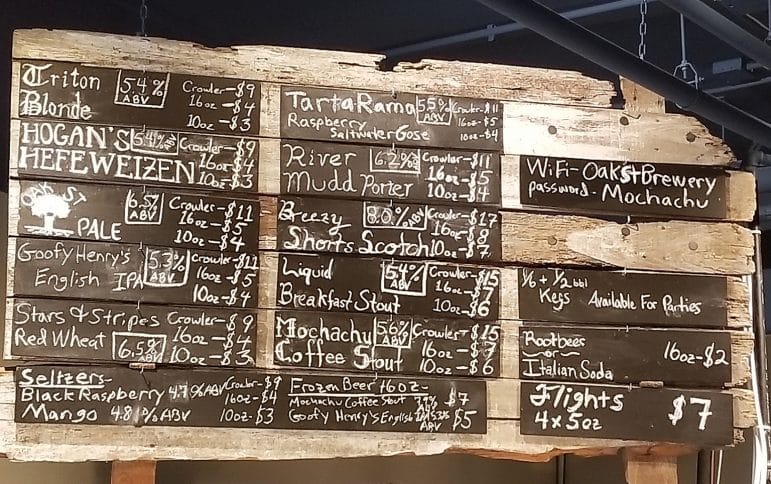 The Menu at Oak St Brewery

As for the beer itself, Oak St Brewery offers a wide variety. Among them are Triton Blonde and Hogan’s Hefeweizen, two lighter beers that Greenaae said that co-owner Greg Greenaae has spent the better part of 18 years perfecting.

Other beer offerings include River Mudd Porter, Oak St Pale and Goofy Henry’s IPA. All of the brewery’s beers are good sippers with a range of 5.3% to 8% ABV.

If you’re having trouble deciding exactly what you’re in the mood for, Oak St Brewery offers beer flights in four 5 ounce servings for $7, something that Greenaae is especially excited about.

“Someone can come in and sample a few beers and then find their favorite,” he said. “Flights are popular and count for the majority of our sales.”

Greenaae and his team have big plans for the summer. They’re hoping to start doing brunch in June and have boozy breakfast drinks to go along with it like mimosa hard seltzer and Michelada, a Mexican twist on a Bloody Mary made with beer.

Greenaae also hopes to expand his food days to Thursday, Friday and Saturday, but in the meantime he’s working with Jazzy Pete’s, a restaurant next to the brewery, to get people fed.

“Jazzy Pete’s has been great and they deliver right to the brewery,” he said. “We want to be a part of the neighborhood and help out any other businesses we can.” Grennaae also has future plans to distribute kegs to restaurants in the Riverbend.

Oak St Brewery is open Sunday through Thursday, noon to 8 p.m. and Friday and Saturday, noon to 9 p.m.  It’s closed on Mondays.