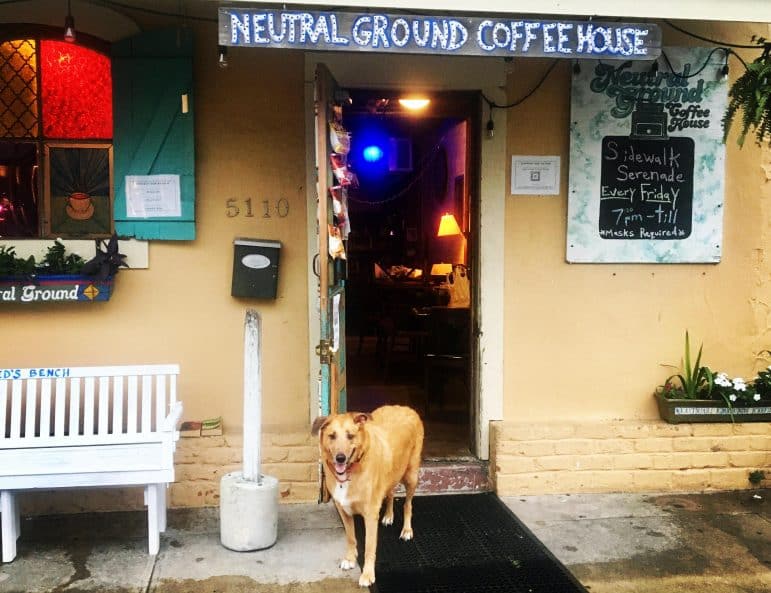 Eli, one of the regulars, in front of Neutral Ground Coffee House

Even a fire, hurricanes, financial collapses and a pandemic cannot keep the Neutral Ground Coffee House from being there for its devoted regulars.

Last summer, as the coronavirus raged, it was saved once again when two new owners, James Naylor and Phant (a.k.a Caroline) Williams, stepped in and purchased the venerable Uptown coffee house.

“We are a community, some of whom have been here since 1977,” Naylor said. “Really, it’s like family – very inclusive and multigenerational too.”

The bohemian enclave goes back to 1974, when a graduate student named Greta Lee opened the Penny Post on Maple Street. It featured not only coffee, tea and pastries but live music, chess and backgammon, and lively conversation. By the time it closed after a fire in 1977, it had a loyal following.

Those regulars joined with Lee in the face of opposition from a neighborhood organization that didn’t want the hippie hangout on Maple Street. The neighborhood group succeeded.

Lee herself decided not to continue, suggesting it become a co-op, but her customers were determined to find a new location. No one seems to know what became of Greta Lee, but the spirit of what she started lives on.

A few months later, when the Red Lion Bar closed at 5110 Danneel St., the group saw an opportunity to lease a move-in-ready property. It was set up as a venue, so almost nothing but some furniture was needed.

Someone had some tables from a shuttered Bud’s Broiler, and with that, the Penny Post reopened as a cooperative, owned by its members and originally managed by two of the regulars, Adolph Lopez and Diane Carson.

They couldn’t afford to rent the entire room, said so the space was divided between the Penny Post and another coffeehouse, the Borsodi. The Penny Post provided acoustic music on one side of a barge-board wall, while the Borsodi specialized in poetry readings and plays. 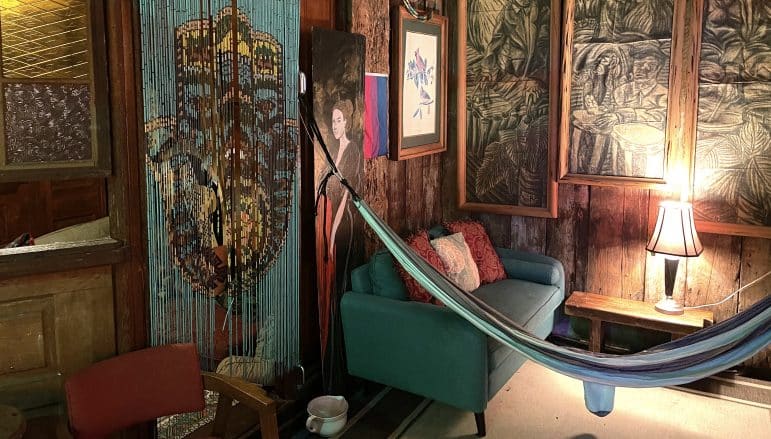 The coffee house has always cultivated a homey atmosphere.

In 1992, the Penny Post closed again. As its website states: “Unfortunately, the good vibrations and love of fellow man were eventually unable to compete with the ongoing financial strains.”

Musician Philip Melancon, a regular at Penny Post, has been through thick and thin with the coffeehouse. Through various structures, locations, boards of directors — even offering the place for sale in the newspaper.

But enough people, like Melancon, are passionate about the place and want to see it not only survive but flourish. It reopened again under Melancon’s management, this time as the Neutral Ground Coffee House. The open mic nights, the chess tournaments and the camaraderie continued. So did the financial difficulties.

“I had my own career as a teacher,” he said, “so I didn’t want to run this myself.” Trying different iterations of the co-op structure, he ran it on and off for a number of years, while also building a career as an entertainer.

Then in 2000, as it was ready to close for good, he bought it by paying off the back taxes. The coffee house was saved. Its community did not lose their “third place,” a place outside of home and work where they could relax, exchange ideas and build relationships.

“James [Nayor] and Phant [Williams] were instrumental in the whole process, so it was wonderful that they have taken it over now,” Melancon said of the current owners. “If anyone could do it, it is the two of them.”

Over the years, there have been managerial changes, financial collapses and a flood. After the levee failures in Hurricane Katrina, volunteers ripped up and replaced the floor and, despite having no power, the Neutral Ground Coffee House opened soon after the storm. They presented “USO style” shows for the troops that were in town.

From the very beginning, Neutral Ground Coffee House has been known for its acoustic music and for being a showcase for singer-songwriters. Melancon is among those who honed their chops on its stage, the first place he played the piano in public.

Another is Mike True, who has not only been a regular but has been playing there for more than 40 years. This singer-songwriter, who plays guitar, said it provides a sense of community, a sense of being a part of something.

True, who came to music later in life, said it is a good venue to launch musicians.  “I’ve seen young musicians play here and develop over time and go on to have their own careers – it’s all about the energy and the synergy,” True said. He has a group he calls the Phantom Band — anyone who comes along with an instrument can join.

True also made a point of saying just how much he appreciates Williams and Naylor keeping the place open. “They understand the importance of supporting the arts as well as the historic legacy of New Orleans’ longest running coffeehouse,” he added.

“It’s a simple place that makes people feel comfortable,” Melancon said. “And there are always young people who enjoy going there because they are not yet drinking age.” 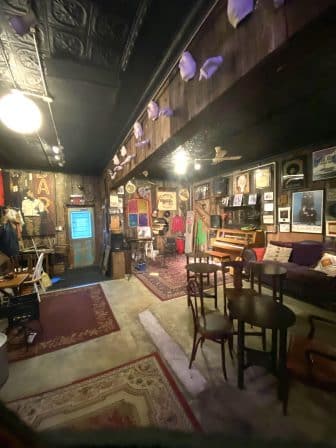 The Neutral Ground does not serve alcohol, providing a space available for all ages and for those who cannot or choose not to drink, especially in a city focused on a drinking culture.

Aila Scott, another regular, has going there since she was 18 when she couldn’t get into other places.

“I played my first-ever gig there,” she said. “And I signed my first lease in New Orleans with someone I met there. The community that runs it is as tight as it gets.”

The sense of community and belonging was top of mind for everyone involved with the Neutral Ground.  “New people come weekly and they cannot believe that such a place like this exists,” Scott said.

Although the inside space is not fully open in the time of the pandemic, the sidewalk is. The Sidewalk Serenades feature musical acts and Fridays and Saturdays and an open mic night on Sundays.

It also has a gallery featuring local artists’ work. True, also a visual artist, regularly shows there, as does Ashley Beach, known for her creative portraiture. When the Neutral Ground Coffee House reopens daily and for inside service, the owners plan to continue this tradition as well.

Like other nonessential businesses (although the regulars might contest that), Neutral Ground Coffee House shut down in March 2020. It gradually opened up in late July, at first just on Fridays. It was all word-of-mouth, no advertising or social media.

It was then that Naylor and Williams bought the business from Melancon, and the two took over the management.

“I prefer the term ‘caretaker’ or even ‘House Mother’ (instead of part owner), because the Neutral Ground isn’t really a business so much as it is a community. And who can own a community?” Williams said.

“I’ve been involved in the coffeehouse since first discovering it in high school, back in the late ’90s,” she continued. “The Neutral Ground Coffee House is a special community, in that it runs on love rather than profit. I believe that’s why we can survive hard times like COVID.”

Then with the COVID infection spike in January, they closed again for the month — plus with the cold weather it was not feasible to have live music and serve outside.

They again reopened in early February to present the Sidewalk Serenades. Naylor brings his old pickup truck and parks it out front. The musicians play on the back of the truck – weather permitting — to a socially distanced audience.

“We have even had Piano on a Truck here,” Naylor said. “And every Sunday night is open mic night. I believe we might have the longest running continual open mic night in New Orleans.”

The all-volunteer staff and customers look forward to the day when the Neutral Ground is again open seven days a week. But in the meantime, the good conversation and music play on.

The current hours are 7 p.m. until midnight, Friday through Sunday, with live music every night.

Editor’s note: This story was corrected after posting to state that the coffeehouse’s founder, Greta Lee, was a graduate student and not nurse, as originally stated, and that the first managers were Adolph Lopez and Diane Carson, not Philip Melancon.