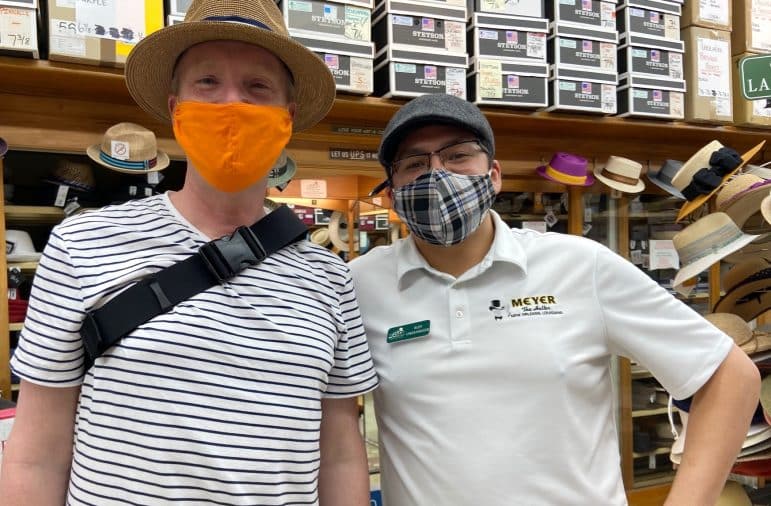 City College of San Francisco biology professor Jonathan Siekmann was enjoying his visit to New Orleans when he spotted Meyer the Hatter, known to be the South’s largest hat store. Within minutes, Siekmann was sporting a new Panama-style straw to shield him from the Louisiana sun.

“The pandemic has been a struggle. It was the worst business climate I’ve ever seen in my 46 years selling hats,” said Paul Meyer, a fourth generation hatter. “We depend on tourists and, until recently, there just weren’t any.”

Born in New Orleans to immigrants of German descent, 14-year-old Sam Meyer began delivering hand-shaped wool and straw hats on foot to the customers of a small St. Charles Avenue emporium. By age 31, Meyer decided to open his own business to support a growing family. He borrowed $500 from his mother to buy his first inventory.

Like many New Orleans businesses, Meyer the Hatter closed for several months at the beginning of the COVID-19 pandemic and slowly reopened when government regulations allowed. Masks are still required for all customers and employees, and social distancing is observed.

“We got an SBA loan and used the Payroll Protection Program to keep up with our expenses,” Cedric Meyer said. The company also benefitted from internet sales.

“Business got better last month, and the last few weeks tourists started coming back, thank goodness.” he said. “We’re looking forward to a good summer and even better fall.” 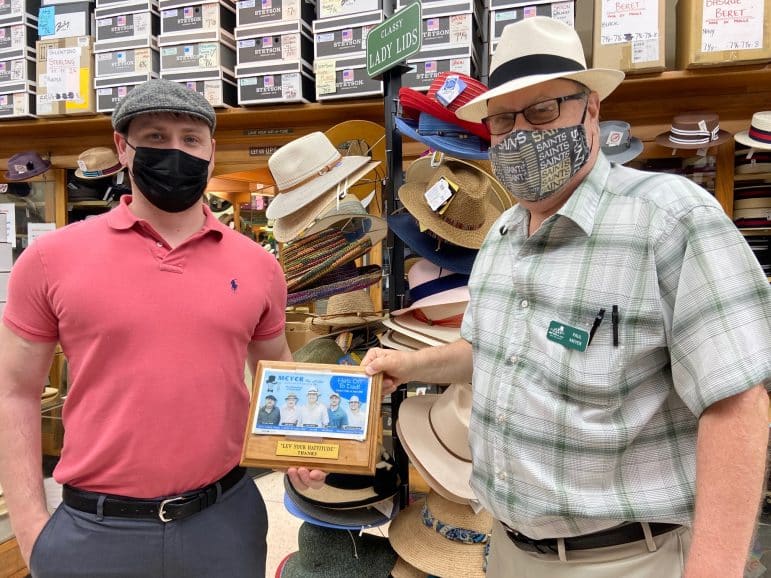 The Meyer the Hatter inventory includes thousands of hats: Stetsons, fedoras, helmets, bonnets, derbies, stiff straw boaters, Panamas, gamblers, top hats, and caps made from wool, felt, linen, straw and cloth.  “We have Saints caps and beanies in the $20 range and beaver felt hats that are $350 or $400,” Meyer said.

The company sells hundreds of summer straw hats annually. Also popular are the sporty Kangol caps. “Today with so much more variety and an explosion of style, colors and brands, there is a hat for everyone,” he said.

When Elvis Presley performed in New Orleans in August 1962, he shopped at the store.  So did Tom Petty, Jimmy Buffet, Regis Philbin, Susan Sarandon, Sylvester Stallone and Vanessa Hudgens during visits to the Crescent City.

It’s not just visitors who frequent the store. Autographed photos of famous customers on the wall include Kermit Ruffin, Irma Thomas, Freddie King, Aaron Neville, Fats Domino, Dr. John and Paul Prudhomme. Many members of the city’s vibrant social aid and pleasure clubs complement their suits with a hat from Meyer the Hatter.

“There is nothing like a new hat to make people feel their best,” Meyer said. “It’s a very unique business, and our family is proud to be a part of New Orleans re-emerging economy.”

With early voting scheduled to begin next weekend, state Sens. Troy Cater and Karen Carter Peterson are pulling out all the stops in their race to replace former U.S. Rep. Cedric Richmond, who has joined President Joe Biden’s staff.

District Attorney Jason Williams, who hosted a Zoom forum with Carter earlier this week, will endorse Carter today (April 1) on the steps of Criminal District Court. Carter’s other recent endorsements include several of the unsuccessful candidates in the primary:  Greg Lirette, Sheldon Vincent, Belden “Noonie Man” Batiste and Harold John.

Chambers will appear with Carter Peterson tonight at NOLA Brewing Company from 5 to 7 p.m.

Carter Peterson was also endorsed by East Baton Rouge Councilman Cleve Dunn Jr. Other endorsements from the Baton Rouge area are expected in the coming days. Information on Carter Peterson’s recent fundraising efforts was not available at press time.

Attorney and former legislative candidate Robert McKnight is working with the Rev. Torin Sanders of the Sixth Baptist Church to collect Easter baskets for young children whose families have been negatively impacted by COVID-19.

“Our families and children should be able to experience the joy of Easter, regardless of the economic hardship COVID-19 has caused,” McKnight said.

Sanders and McKnight are asking the public to donate completed Easter baskets filled with elementary age-appropriate items. Completed baskets can be dropped off at the Sixth Baptist Church, 928 Felicity St., on Easter Sunday (April 4) from 9 until 11 a.m. “We are thankful for these gifts that we know will uplift the spirit of our youth during such trying times,” Sanders said.